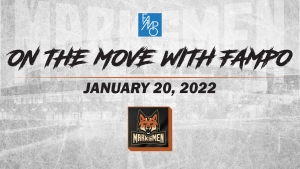 Forward Tyson Kirkby has been traded to the Evansville Thunderbolts in exchange for future considerations.

Kirkby came to the Marksmen in the middle of December and logged three assists in his first three games from Dec. 16-18. The SUNY-Oswego product notched his first professional goal on Saturday, Jan. 8 vs. Macon.

The Marksmen have also signed defenseman Mark Wilson to a standard player contract.

Wilson, from York University in Canada’s USports league, has logged seven assists in 31 career games at York over four years. Like many Canadian collegiate athletes, Wilson is forgoing the second semester of his senior season with many doubting that USports will resume hockey play this season.

Wilson is a Winnipeg, Mb.-native who spent his junior career in the MJHL, mostly with the Sellkirk Steelers, but having also played with the Winnipeg Blues and the Steinbach Pistons.

He is projected to make his professional debut with the Marksmen tomorrow night at Knoxville. The game is scheduled for 7:35 p.m. and you can follow along on HockeyTV, the Marksmen Radio Network on marksmenhockey.com and via Marksmen social media.