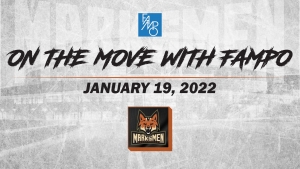 Defenseman Skyler Smutek has been traded to the Evansville Thunderbolts in exchange for future considerations.

Smutek suited up for two games for the Marksmen this year, both this past weekend against Roanoke. He did not register a point.

Upon suiting up for Evansville, Smutek will have played for four SPHL teams this season (Peoria, Vermilion Co., Fayetteville) and one ECHL team (South Carolina)

The Marksmen have also added forward Zach Remers to the roster after returning from his call-up to the Iowa Heartlanders of the ECHL. Remers spent 19 games in Iowa and logged a goal and two assists.

Remers had practiced once with the Marksmen before his call up, but has not played a game for Fayetteville this season.

He is expected to be available to play this weekend against Knoxville and Birmingham, with both games being on the road.