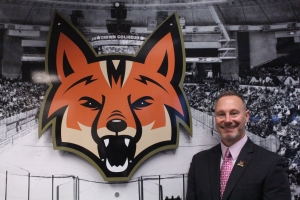 The 2022-23 season will be Charles “Chuck” Norris’ sixth as the Owner & CEO of the Marksmen. The former U.S. Army paratrooper spent over 20 years in Fayetteville and is a veteran of Operation Desert Shield/Storm.

Under Norris, the Fayetteville franchise has seen growth every season in attendance and success on the ice. He prides himself on hard work and doing things the right way – virtues the Marksmen hold as part of their team fabric.

Since 1998, Chuck has owned and operated Norris Construction – a service-disabled, veteran-owned small business – specializing in residential building and development, as well as insurance reconstruction.

Chuck lives in Charlotte with his wife, Lanai and their three children, Chucky, Lilly, and Khloe. 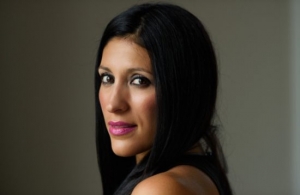 The 2022-23 season will be Lanai’s sixth with the Marksmen. As the Chief Financial Officer, Lanai oversees the financial aspects of the team-including budget items, revenue, and payments for both the front office and hockey operations department.

Lanai lives in Charlotte with her husband, Chuck, and their three children, Chucky, Lilly, and Khloe. 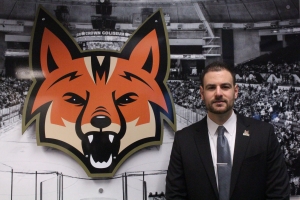 The 2022-23 season will be Alex Wall’s third with the Marksmen, and his first full season serving as President after a promotion in February 2022.

Previously with Feld Entertainment, Wall was responsible for cultivating business partnerships around some of the world’s most iconic live shows. Before that, he spent five seasons leading partnerships and marketing for two highly-successful ECHL franchises – the Orlando Solar Bears and Jacksonville Icemen.

A Tampa, Fla. native, Wall graduated from Stetson University (DeLand, Fla.), where he earned his Bachelor’s Degree in Sport Management and Marketing. Wall lives in Fayetteville with his wife Suzanne and their son, Jacob. 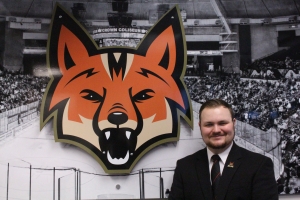 The 2022-23 season will be the second season for Drew Blevins with the Marksmen as the director of communications, community relations, and play-by-play voice.

Blevins came to the Marksmen after two seasons spent in professional hockey as the play-by-play voice of the FPHL’s Carolina (Winston-Salem, N.C.) Thunderbirds, where he elevated the team’s broadcast to never-before-seen heights. He did this through new graphics packages, a stronger emphasis on visual storytelling and becoming a pioneer in directing, producing and performing a full-TV style broadcast.

Blevins, a native North Carolinian, from Wake Forest and NC State alumnus, will oversee all community outreach and events for the Marksmen organization, working closely with the surrounding communities to get the Marksmen brand everywhere, as well as work with non-profit organizations for initiatives. 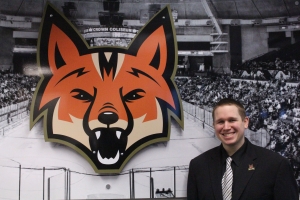 The 2022-23 season will be Joey Huot’s second in the account executive, ticket sales role.

A 2018 Central Michigan University graduate, Joey majored in broadcast & cinematic arts, and received a minor in both sport management and journalism. Originally from the metro-Detroit area, Huot had stops in both the Frontier (Baseball) League with the Evansville Otters and the Federal Prospects Hockey League with the Motor City Rockers.

Huot will oversee season, flex, and group ticket sales for the Marksmen, and create the best possible experiences for all attendees at the Crown Complex – whether it’s their first or hundredth time!

While the road to the Marksmen has been a long one, Joey cannot wait for the season to get started and for the fans to rock the Crown. 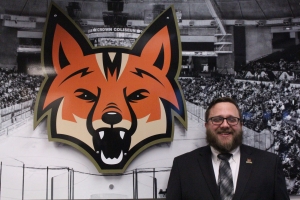 The 2022-23 Season will be Karl Lowe’s second in the Account Executive, Ticket Sales role.

Karl graduated from Radford University in 2015 with a degree in exercise, sport, and health education with a concentration in sports administration and a minor in business.

He had previously held roles with the Carolina League’s Lynchburg Hillcats and the ECHL’s Norfolk Admirals.

Born in Panama City, Karl was raised in Lynchburg, Va., but moved to Fayetteville in October 2021.

Karl works primarily with individual season ticket accounts, group ticketing, and school performances in addition to some other areas of ticketing within the Marksmen organization.

Away from the office, Karl enjoys cooking, reading, and watching his Washington Capitals and Nationals play, as well as the NFL’s Miami Dolphins. He is a also a proud cat owner of his cat, Lexie. 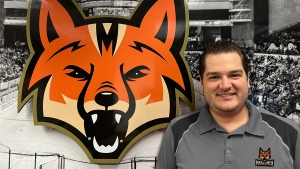 Shawn Rose is entering his first year with the Fayetteville Marksmen for the 2022-23 campaign.

Growing up playing hockey for his hometown Hampton Roads Admirals youth organization, Rose would parlay his playing experience into a career in juniors with the New Jersey Wildcats. While in New Jersey, Rose graduated from Parsippany Hills High School.

Longing to return home, Rose enrolled at Radford University and played three years of club hockey for the Highlanders. In 2016, Rose graduated with a degree in social science.

Rose now resides in Fayetteville with his wife, Ellen. 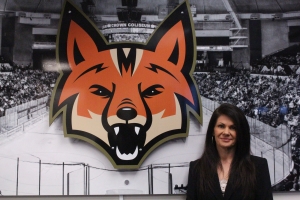 The 2022-2023 season will be Denise Cline’s fourth with the Fayetteville Marksmen, working as the merchandise manager.

A native of Fayetteville, Cline is a graduate of Terry Sanford High School and studied at Fayetteville Technical Community College. In the 2018-19 season, Cline completely overhauled the merchandise approach for the Marksmen, leading to new and attractive apparel being constantly available for fans. 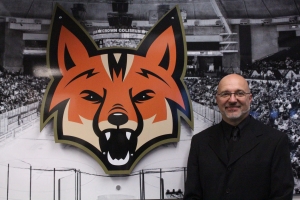 The 2022-23 season will be Scott Cline’s fifth full season with the Fayetteville Marksmen, in the roles of game day coordinator and producing all in-arena sounds as the DJ.

A native of Fayetteville, Cline is a graduate of Cape Fear High School and studied at Fayetteville Technical Community College. The 2017-18 season was a return to post for “DJ Hitz The Mark”, who had previously worked with hockey in Fayetteville as DJ / game day staff for the CHL’s Fayetteville Force in the late 90s.