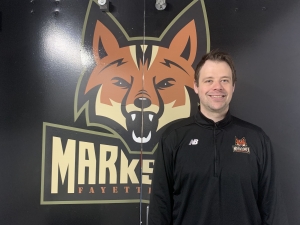 The 2022-2023 season is Cory Melkert’s third with the Marksmen and second as the Head Coach / Director of Hockey Operations.

Melkert, a native of Kenmore, Ont., was a standout defenseman with the Trenton Golden Hawks of the OJHL and parlayed a 38-point season in 2010-2011 into a spot on the SUNY-Fredonia (NCAA D-III) team the next season.

Known as a leader, Melkert would skate in 90 NCAA D-III games with the Blue Devils and was named team captain his senior season.

After his time at SUNY-Fredonia, Melkert would play a season in Germany with HC Timmendorfer Strand before returning to the United States and making his SPHL debut. He would log 46 points in 152 SPHL games in his four-year career.

Acquired by the Marksmen for the final 26 games of the 2018-2019 season, Melkert would hang up the skates and join then-head-coach Jesse Kallechy behind the bench for a 2019-2020 season that saw the Marksmen finish tied for first place in the league before the COVID-19 pandemic shut the sport down.

Named the head coach upon Kallechy’s departure, Melkert led the Marksmen to a 41-win season in his first year, setting the franchise record for most wins and most standings points in a single season and earning a nomination for SPHL Coach of the Year.

Melkert and his wife Paxton married in June 2022 and live in Fayetteville. 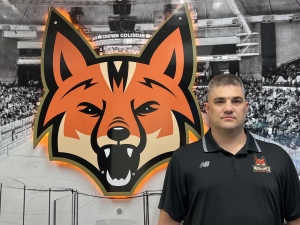 Ryan Parent joins the Marksmen for his first season as the team’s equipment manager.

“I’m excited to get a chance to be with Fayetteville and help them in pursuit of a championship,” said Parent.

Originally from Atlanta, Ga., Parent has one year of SPHL experience under his belt with the Knoxville Ice Bears during the 2021-22 season.

After a 16-year career in the U.S. Marine Corps., Parent left the service with a rank of gunnery sergeant. After leaving the service, Parent pursued a career as a fireman.

Parent began working with the USPHL’s Potomac Patriots in 2017 on a part-time basis as both the team’s trainer and equipment manager. He left full-time fire and rescue to pursue a career in equipment prior to accepting the job with Knoxville.

Parent currently resides in Stafford, Va. With his wife and two children. 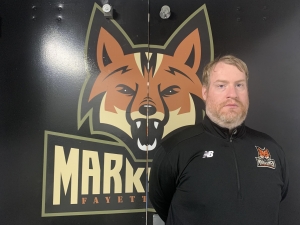 The 2022-2023 season is Kyle Sherrill’s fifth with the Marksmen as the Head Athletic Trainer. He has been involved in minor league hockey in Fayetteville since 2007.

A native of Red Springs, N.C., Kyle earned his B.S. in athletic training from Methodist University . He also minored in physical education as well as strength and conditioning. He has been a BOC certified athletic trainer since 2008.

Along with his passion of working with professional athletes, Kyle also enjoys providing athletic training services youth athletes in the Cape Fear region. Kyle has been a member of the NATA since 2005 and enjoys using his knowledge to educate the community in sports medicine.