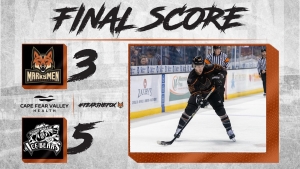 KNOXVILLE, Tenn.- The Fayetteville Marksmen, proud members of the Southern Professional Hockey League, fell to the Knoxville Ice Bears at the Knoxville Civic Center 5-3 on Friday.

Knoxville started off quickly with Razmuz Waxin-Engback hitting Brady Fleurent for a 2-on-1 goal just 34 seconds into the contest. The Ice Bears would hold the 1-0 lead through the end of the first period, despite being outshot 11-6 in the first.

Matt McNair would score one second after a carry-over powerplay expired in the second period, just 1:20 into the frame. McNair’s goal was his 10th of the season.

Just three minutes later, Drake Glover would bury a rebound from a Vincenzo Renda shot to give the Marksmen the lead. The Marksmen would again outshoot Knoxville 11-6 in the second period.

The third period was a rollercoaster with Stepan Timofeyev scoring one of his two on the night just 1:25 into the period to tie the game.

Then, Riley Robertson would be ejected and assessed a major penalty for an illegal check to the head of Marksmen forward Taylor Best. Best would not return to the game.

Knoxville would take two more penalties during the major during a streak that saw the Ice Bears take ten straight penalties in the hockey game. Three seconds into the second of the two penalties, Tanner Froese scored through the five-hole of Ice Bears’ starter Evan Moyse to give the Marksmen a 3-2 lead.

After a Sam Stormoen tripping penalty put Fayetteville down a man, Timofeyev would score his second goal of the game driving down the far wing and lifting a backhander over Matt Williams.

With 3:03 to go in the game Fleurent crashed the net and scored to give Knoxville the lead for good. J.B. Baker would add an empty net goal to extend his point streak to 11 games.

The Marksmen outshot Knoxville 29-22 in the hockey game, but were only 1-for-9 on the powerplay. Williams stopped 17 of 21 shots he faced and is still in search of his first professional win in three appearances for the Marksmen.

Fayetteville will remain on the road, facing the Birmingham Bulls at the Pelham Civic Center tomorrow evening at 8 p.m. You can follow the game on HockeyTV, the Marksmen Radio Network on marksmenhockey.com or via the Marksmen social media channels.