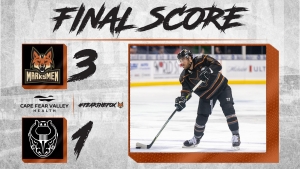 PELHAM, Ala.- The Fayetteville Marksmen, proud members of the Southern Professional Hockey League, defeated the Birmingham Bulls 3-1 at the Pelham Civic Complex on Saturday night.

Zach Remers opened the scoring just 4:19 into the game, scoring his first goal as a Marksmen. Remers would add an assist later in the game.

Just four minutes after the Marksmen opened the scoring, Drake Glover would add his seventh goal of the season, four seconds after a Marksmen St. Peter Pest Control power play expired. Glover has now scored a goal in three of his last four games.

Adding to a strong first period, Shane Bednard potted a short-handed goal 14:40 into the game.

Fayetteville blitzed Birmingham starter Hayden Stewart scoring three on 17 shots in the first period. The Marksmen have now outshot their opponents in seven of the last nine periods and in each of the last three games.

In net, rookie Matt Williams earned his first professional win. Williams turned away 23 of 24 shots, with the only goal coming 2:04 into the second period.

The victory snaps a three-game losing skid by the Marksmen and keeps them in fifth place in the league and within striking distance of Peoria.

The Marksmen have taken the season series over Birmingham winning four of the first five meetings over the Bulls. The two teams will not see each other until March 18 and 19 in Fayetteville.

Next weekend, the Marksmen will play three games in three days at home. On Friday, Macon comes to town on Stranger Things Night. Then, Pensacola visits Fayetteville for the only time this season on Saturday and Sunday for Star Wars Night presented by the Salvation Army and Salute to Service Sunday presented by MetroNet.

Tickets are still available in limited quantities for all three games. You can secure yours by visiting the tickets tab at the top of marksmenhockey.com.