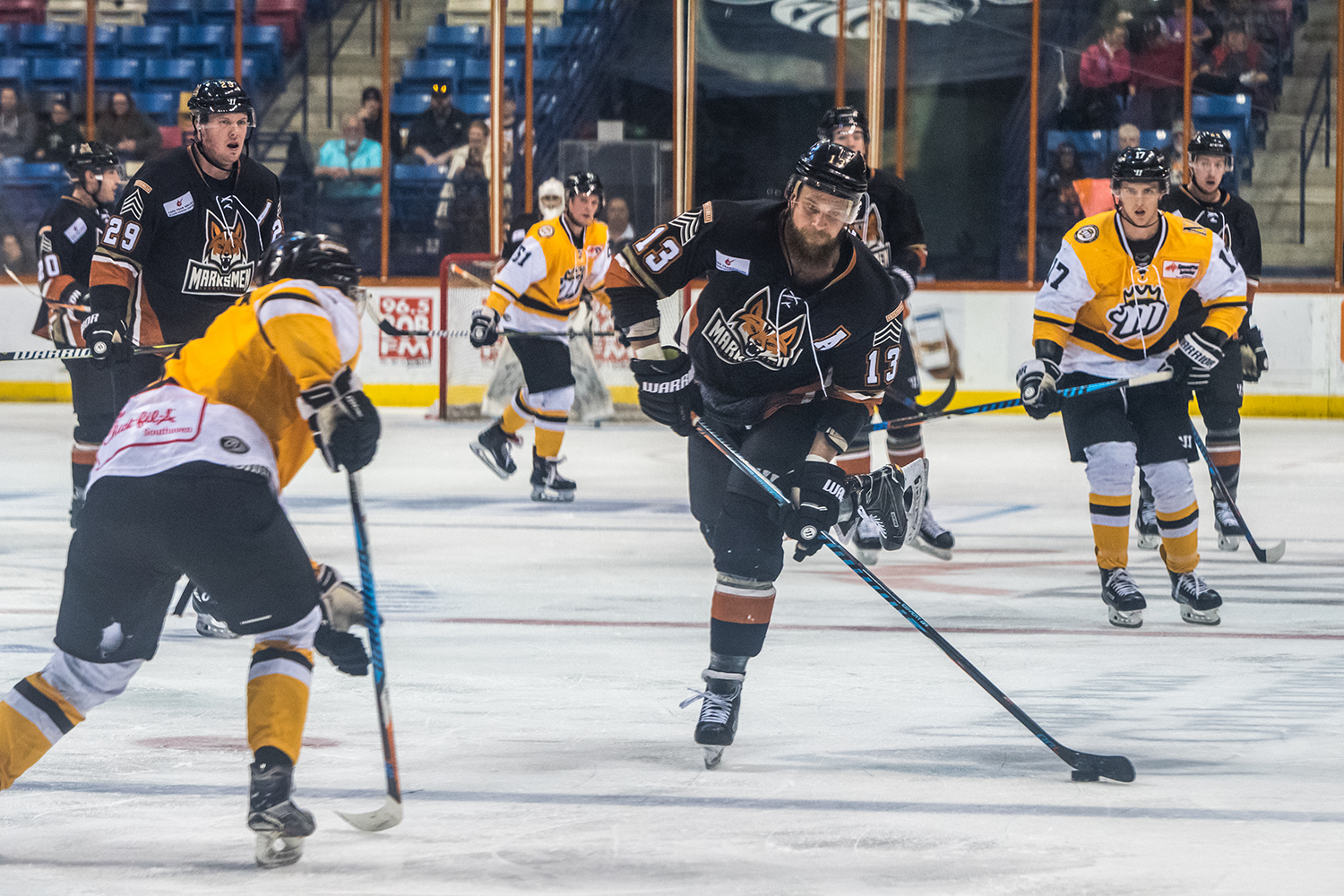 Fayetteville, NC– The Fayetteville Marksmen continuously clawed their way back from early deficits but couldn’t find the game-tying goal late, dropping a 5-4 decision to the Mississippi RiverKings on Saturday night at the Crown Coliseum.

The opening frame looked as though it would play out much like the night before, but the RiverKings were able to find the back of the net midway through to take a 1-0 lead. With a scramble in front of the net of Matt Leon, Ryan Marcuz found the loose puck and buried the rebound, over the glove of Leon.

That was the only goal scored in the first period, as the Marksmen skated to the locker room after 20-minutes, down 1-0.

Much like the previous contest, the second period saw both teams come to life, with a seven-goal outburst between the two teams.

The RiverKings took a 2-0 advantage, just 26-seconds into the frame. Kristaps Bazevics rifled a shot from the left point towards the net. The puck hopped through a sea of bodies, deflecting off the stick of Dillan Fox and over the head of Leon.

Jamie Hill brought his team back to within one, with his 16th of the season. Driving into the zone Tyler Palmer forced the defense back and pushed a backhanded pass to the tape of Hill, who had time and space to rip the puck past Tyler Green.

42-seconds later, the RiverKings answered back, to regain the two-goal advantage. Cycling the puck around the zone, Vytal Cote found space at the top of the right circle for a booming one-timer, to make it 3-1.

The Marksmen, who had previously gone 0-for-19 while on the man-advantage, broke through midway through the second period, with Tommy Fiorentino’s fourth goal in four games. Andrew DeBrincat skated down the RiverKings zone, along the right boards and saucered a pass to the tape of Fiorentino at the top of the slot for a quick one-timer.

That power-play strike set the tone for the rest of the Marksmen man-advantages, with Jake Hauswirth netting the equalizer while on the third power play of the night. Hauswirth positioned himself at the top of the right circle, waited for traffic to cross in front of Green, and roofed a wrister to the top corner, to make it 3-3.

Once again, the RiverKings wasted no time to regain the lead, with Marcuz’s second of the night, just 47-seconds later. Working a two-on-one into the zone, Fox fed a perfect feed to the tape of Marcuz, who easily deposited the puck to the back of the net.

In the waning moments of the middle stanza, the RiverKings extended their lead to two goals once more. While on the power play, Fox pushed a pass down low to Ryan Salkeld, who fed the puck back to a streaking Fox for a quick redirection past Leon.

The third frame settled down, with the Marksmen finding the only tally of the period. Paul Russell found space at the top of the right circle and drilled home the power play, one-timer to bring the Marksmen back to within one.

Despite a flurry of chances in the final seconds, Green was able to hold the puck out of the net and give the RiverKings the 5-4 victory.