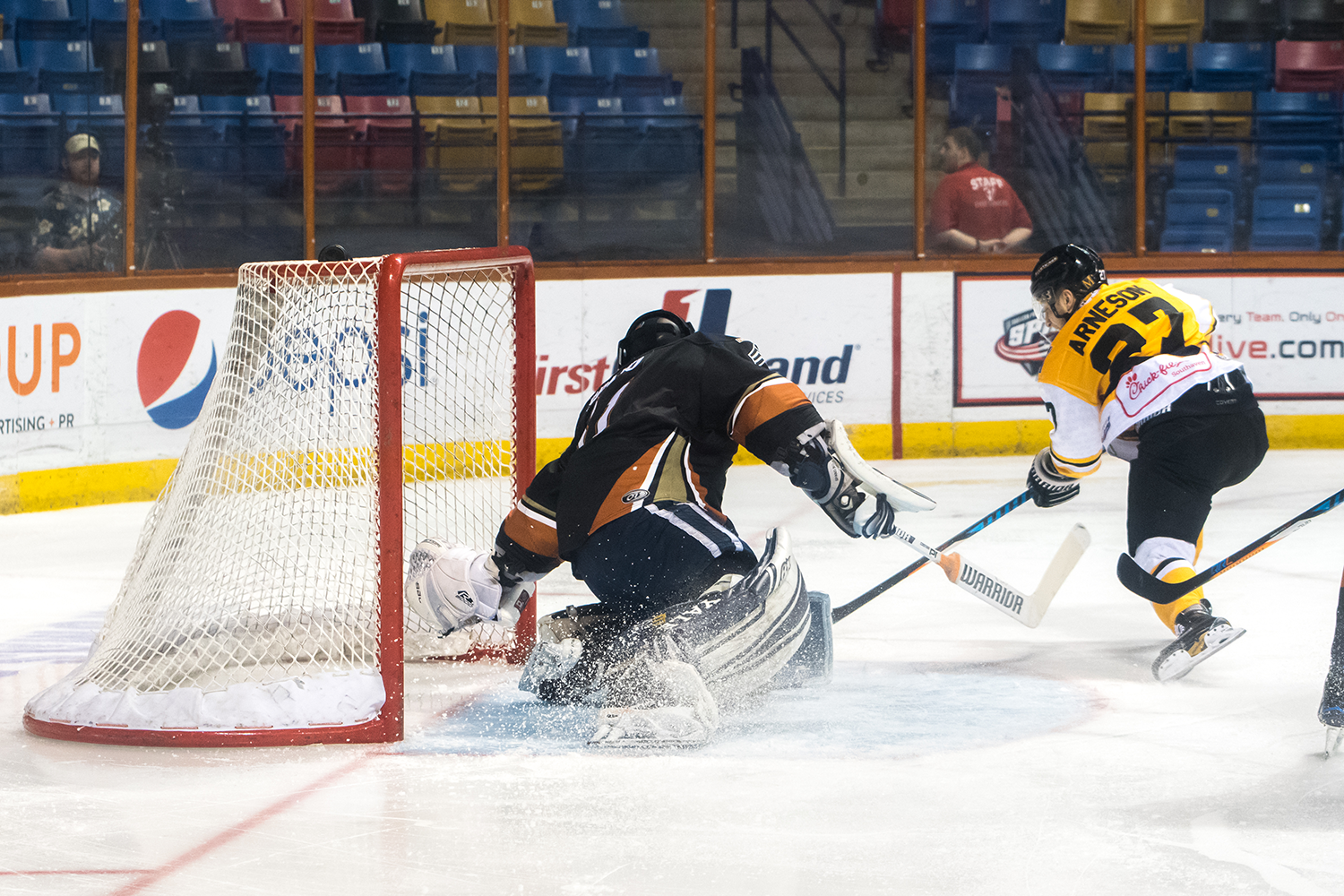 Fayetteville, NC– Despite nine power play opportunities, the Fayetteville Marksmen couldn’t strike while on the man-advantage, and fell to the Mississippi RiverKings, 7-4, on Friday night at the Crown Coliseum.

Both teams generated quality chances throughout the first period, but both goaltenders stood tall against the task, as the teams skated to a 0-0 tie after the first 20 minutes of play.

The floodgates opened, just 19-seconds into the middle stanza, with Junior Harris getting the Marksmen on the board first. Andrew DeBrincat used his outstanding speed to create space entering the zone, allowing him to rifle a shot in on net. The initial shot was stopped by Tyler Green, but the rebound landed at the feet of Harris, who deposited the loose puck.

Just under three-minutes later, the RiverKings answered with a tally of their own. Ryan Salked drove the net down the right-wing side, picking a backhander up on Patrick Spano, who could not handle the puck cleaning, allowing the rebound to squeak out to the far side, where Ryan Marcuz buried the quick wrister.

Daniel Tedesco notched his first goal of the night at the 5:36 mark of the second frame, to give the RiverKings their first lead of the game. Mark Whiteley pushed the puck to the far side from the left point, finding Devin Mantha down low. Mantha, rather than taking an ill-advised shot, waited patiently for Tedesco to find space, and saucered a pass to the tape of his stick, making it a 2-1 game.

After giving up the lead, the Marksmen found another gear and were rewarded for their efforts at the 10:00 point of the period with a shorthanded goal. Rookie Andrew Doyle showcased excellent strength, bodying off a defender, working his way in on Green, and pushed the puck to the far post for his first professional goal.

Just 57-seconds later, the RiverKings regained their one-goal lead, courtesy of Tedesco’s second of the night. Vytal Cote fed a cross-ice feed through the goal crease to Tedesco, who was on the weakside, unmarked, and buried the one-timer just as a Marksmen penalty had expired.

The seesaw battle continued 42-seconds later, with Anthony Flaherty’s first goal as a Marksmen to make it a 3-3 contest. Paul Russell utilized his tremendous speed to push the defenders back as he made his way in on Green. The in-tight chance for Russell was stopped by Green, but the rebound bounced to the slot for Flaherty.

While on a power play over a minute later, the Marksmen find themselves on the wrong end of an unfortunate break. Travis Jeke’s stick gave way as he attempted to hold the puck in the zone, giving the RiverKings a two-on-one break for Marcuz and Derek Sutliffe. Marcuz, skating down the right side placed the puck on the tape of Sutliffe, who lifted to puck into the open net for the shorthanded strike.

The third period began with the Marksmen taking control of the momentum, as they looked for the equalizer, eventually finding it with Jake Hauswirth’s 24th of the season. While working on a four-on-four situation, Jeke drove the zone, fanning on his initial shot, but was able to kick the puck towards the crease of Green. Green made a diving attempt to cover the puck, but it made its way to the right side for Hauswirth to deposit, making it a 4-4 contest.

That was as close as the Marksmen would get, as Dillan Fox gave the RiverKings the lead for good at the 12:12 mark of the third period. Fox took the puck into the zone, worked around a RiverKings defender, and flipped a backhander over the glove of Spano as he was falling to the ice.

Mantha all but put the game away, with just 3:03 remaining to play. Off a turnover at the blueline, Mantha walked in on Spano all alone and ripped home the five-hole chance, making it a 6-4 game.

Completing the hat trick, Tedesco added the empty netter to make it 7-4.