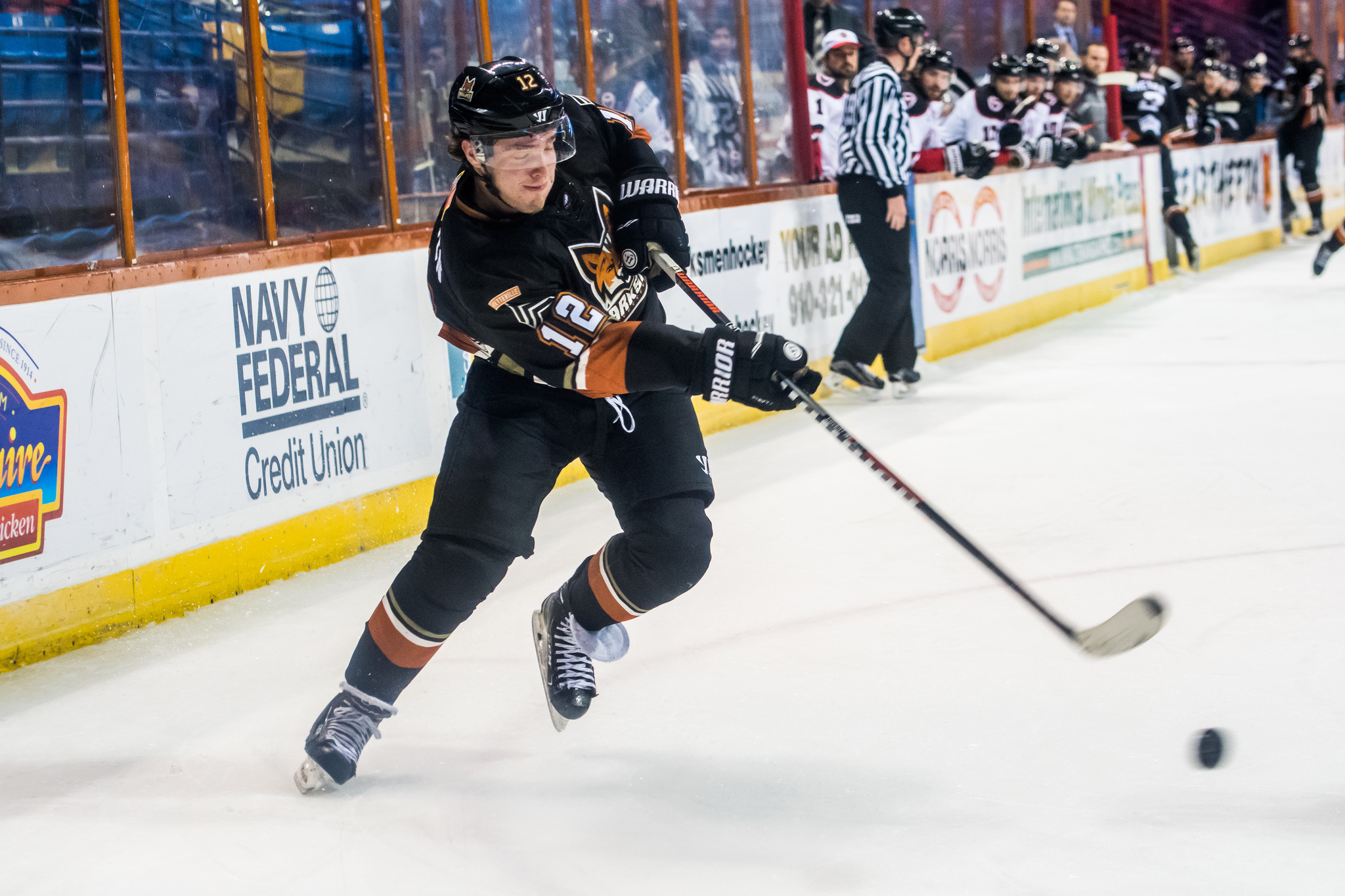 FAYETTEVILLE, N.C. – Avenging their early season loss to Evansville on Friday, the Marksmen looked to seal another series victory Saturday at the Crown for OPERATION: 8LACKOUT (pres. by Rustic Burger) in front of 4,017 fans.

The contest started the same as the previous night; uneventful. Both teams peppered the net with shots, putting both goaltenders to work.

Nathan Perry once again got the call for Fayetteville, trying to defend his perfect 5-0 record. Contrary to him was someone very familiar to Fayetteville: former-Marksmen Alex Murray. Murray was waived by Fayetteville on December 17th, he made a stop in Knoxville before being picked up by Evansville ahead of this weekend. Murray got the call Saturday against his former team, his first start with his new squad.

The game remained scoreless after one, with the shot numbers skyrocketing. Fayetteville sent the puck at the net 12 times, and Evansville 13. After a first period of shooting and not scoring, the teams looked to flip the script.

Under a minute into the second period, the game changed. For the second day in a row, Evansville scored first and made the Marksmen play with a deficit, as Evansville’s Ben Owen sent one into the net :58 in. The goal was Owen’s third of the year, giving the Thunderbolts a 1-0 lead. Fayetteville is used to playing from behind, and usually follows it up with a goal of their own – today was different.

The Marksmen failed to score in the second period, even whil3 outshooting the Thunderbolts by three. The team needed a spark going into the third if they wanted to win their 10th of the last 11.

Fayetteville did what they’ve done best recently, score. Six minutes into the third period of the game, the Marksmen finally found the net for the first time all night. Brian Bowen sent his seventh goal of the season between the posts on a breakaway, evening the game at one.

Knowing more was needed to win again, and they found their chance. Following an Evansville penalty, Fayetteville finally took advantage and scored their second goal of the game off the stick of Cory Melkert (3), his first as a Marksmen. Fayetteville was finally playing with a lead, but that didn’t last long.

:36 after Fayetteville’s go-ahead goal, Evansville scored a goal of their own. The equalizer from enforcer Nick Wright tied the game at two with just over 10 minutes to play, and sent Wright into a tizzy heading towards his bench, putting a fire in Fayetteville’s blood.

Another Evansville penalty came, and that brought out the dogs for the Marksmen. They converted on their second straight powerplay off of Brian Bowen’s stick, who mirrored Wright’s Celly in front of the Evansville bench, taking the lead at 3-2. The Marksmen finished the night 2-4 on the powerplay. Evansville didn’t let the lead hold, as they took two minutes to tie it back up on a powerplay goal.

With the game tied at three and the clock quickly ticking down, both teams were looking to end it in regulation. After a flurry of shots at both goaltenders, the siren rang signaling the end of regulation. Evansville was hungry for their first road win of the season and were willing to do whatever it took to win. The extra period was very quiet, only five shots in total at the net. After a short five minutes, the siren rang again to no avail.

Following 65 minutes of hockey, neither team was ahead, on to a shootout. The Marksmen’s second shootout of the season started out with a goal from Travis Jeke. Evansville’s Eric Salzillo also scored, giving both teams a goal going into round two.

Round five with a chance to extend the game, Fayetteville sends recent hot scorer Max Cook to shoot. He couldn’t cook up a comeback in the shootout for the Marksmen as he misses his shot.