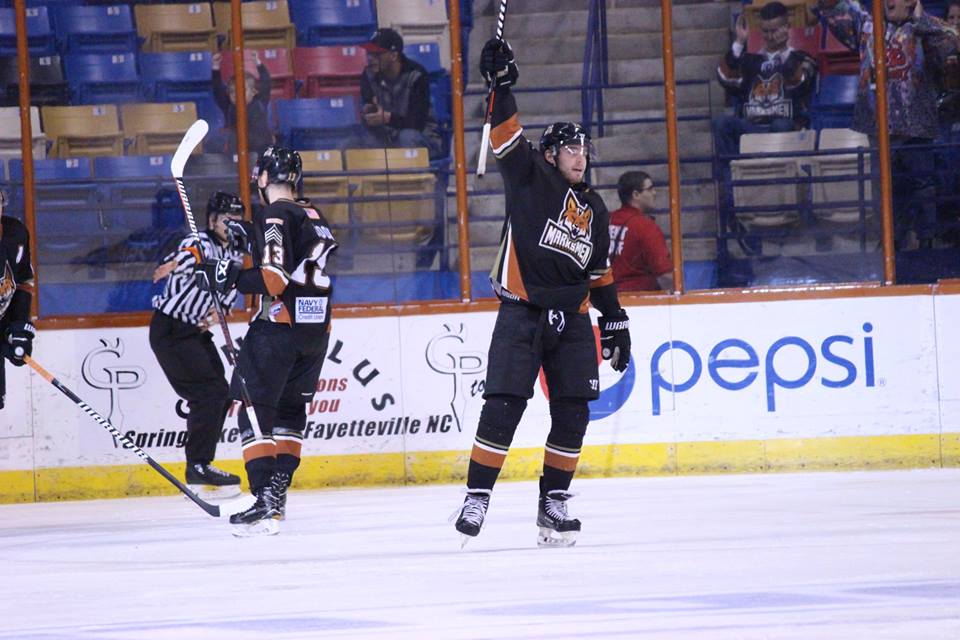 FAYETTEVILLE, N.C. – Coming off Saturday’s shootout loss, the Marksmen were looking to take the series from the visiting Evansville Thunderbolts on Sunday afternoon.

The opening period of the contest was nothing to marvel at; neither team recording anything until an Evansville penalty 5:30 into the game. That penalty gave the Marksmen life, and they used the powerplay and the home crowd to score a mere :35 into the penalty. Brian Bowen scored off from his skate off of a shot from Zach Tatrn, and an assist from Max Cook, the goal gave the Marksmen an early 1-0 lead.

The name of the game on Saturday was matching, but that did not carry over to Sunday. After the Marksmen goal, Evansville put the puck on the net nine times during the period. Goaltender Dillon Kelley, in his first start after his loan to the ECHL, fended off the Thunderbolts opening frame attack. The Marksmen didn’t fare much better in the remaining portion of the first, as they failed to score another goal. After scoring on their first shot of the game, they didn’t score for their next nine shots.

The second period was where the Marksmen showed who the better team was out on the ice. The period got off to a quicker start than the first, as a shot on goal was recorded in the first five minutes by Fayetteville. The scoring wasn’t far behind, as Brian Bowen put the Marksmen back on the board, only 4:05 into the period. An early goal lead to an uneventful middle portion of the second, as even penalties were nowhere to be found. The teams combined for only eight penalty minutes all game, six of which were Evansville’s.

With the second period winding down, Bowen struck again for a hat trick goal. He sent his 13th goal of the season through the net from his backside, giving the Marksmen a 3-0 lead. The fun didn’t end at that, as Taylor Pryce added on to the scoring in the second. His goal with 2:50 remaining in the period made it 4-0 Marksmen and aided the change in goaltenders for the Thunderbolts following the second.

Entering the final period of regulation with a 4-0 lead, the Marksmen were feeling confident about the game. They played well in the third period, but failed to score, as former Marksmen goaltender Alex Murray stood on his head. Evansville never let up the gas, even with the deficit and scored their first goal of the contest, from Shayne Morrissey, just over six minutes into the period. Their first of the game, shortening the Fayetteville lead to only three. Evansville kept it going as only three minutes later Ben Owen rang the puck through the net, shortening the Marksmen lead even more. After coming into the period up by four, the Marksmen needed to pick it up as Evansville made it a game.

Fayetteville’s defense started to tighten up and only allowed four shots on net after the goal in the third period. Evansville did all they could to try and chip away at the deficit even more. After pulling their goaltender for the final minute they still failed to score. The Marksmen win 4-2 over Evansville.

The win also gives the Marksmen the series win, they split the season series as Fayetteville goes 2-1-1 against Evansville this season. The Marksmen improve to 17-12-4 with the win. The win also puts them in a tie with Knoxville for fifth place in the SPHL standings. Evansville falls to 5-26-2 with the loss, they sit in last place in the league.

With the standings tie with the Ice Bears, this weekend’s home-and-home battle with Knoxville becomes a much larger affair, as the winner of this series could potentially provide some space in a tight battle.

The Marksmen are back home Saturday, February 2 for our Groundhog Day with a special-reveal. Tickets are available now by calling the Marksmen office at (910) 321-0123 or clicking on the date above!

Thunderbolts Hold Off Late-Momentum, Down Marksmen in Shootout