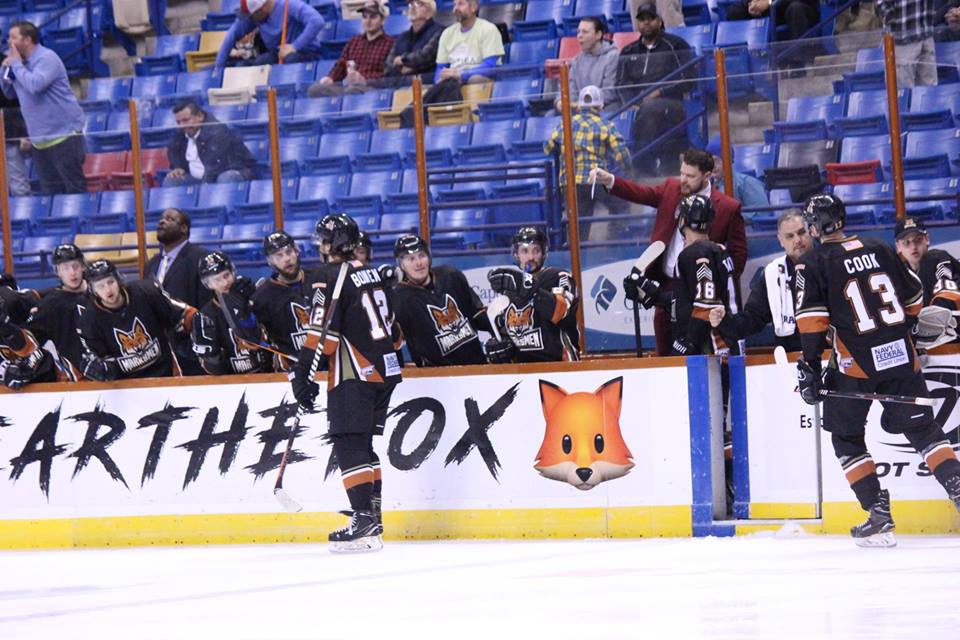 FAYETTEVILLE, N.C. – An incredibly hard-fought weekend against the Evansville Thunderbolts saw the Marksmen come away with the series with two wins, and take five of a possible six points.

While there is certainly a disappointing feeling knowing that the ‘Bolts earned their first road win of the season in the Crown, Head Coach Jesse Kallechy expressed pride in his teams effort more for that game, than their win over Evansville the night before.

Evansville was a hungry, motivated, and aggressive team that wasn’t ready to lay down and die in Fayetteville, but rather ready for a three-game war. Fayetteville matched the intensity, and that’s why they came away the victors.

With the win yesterday, Fayetteville and Knoxville find themselves tied in the standings, as the two foes on the other sides of the Smokey Mountains meet for a series to decide fifth place.

Before we look ahead to that, it’s time for us to name our Three Stars of Week 15.

Going into the dirty areas is not just an option, but an expectation as a forward for the the Marksmen. That was exemplified by Alternate Captain Zach Tatrn.

Tatrn may not have had the flashiest statistics out of the three games with two points (including what had initially been called a goal, but was given to Bowen), but Tatrn’s effort level was incredibly welcome and needed as the team was being hit from many sides by the Thunderbolts.

The leadership and selflessness of Tatrn cannot be understated, and he was a noticeable workhorse when the team needed someone to start creating offense.

Look forward to more plays in the corners and continuously-raising effort levels this weekend out of the A.

Acquired from Pensacola via trade for Futures earlier this month, Melkert has been a proven-and-strong addition to the Marksmen defensive-core, both in the locker room with his veteran experience, and on the ice giving the core an added confidence.

His addition allowed for the Marksmen to play with six-defensemen for the first time since mid-November.

Melkert’s big-body, gritty-checking style of defense brings a new kind of energy to the defense that has been more puck-checking and transition-setting. That was in full effect this weekend, as Evansville’s more gritty style of play had at-times matched Fayetteville’s more zone-control style.

With four points on the weekend, including his first goal as a Marksmen with a blue-line shot, Melkert was also an offensive presence for the team when they needed it.

This coming weekend will be a true-test of Cory’s ability with Fayetteville, going against another hard-hitting, puck-controlling team in Knoxville.

Constantly, Bowen shows why the trade for him was one of the greatest roster decisions in the SPHL this season. After a five-point weekend against the Rail Yard Dawgs in Week 14, Bowen nearly doubled his efforts this weekend.

Bowen came away with an eight-point effort in the three games against Evansville, finishing the impressive scoring with a hat-trick on Sunday evening. In fact, Bowen has scored no-less than two points in five straight games.

In just 20 games played for the Marksmen this season, Bowen has had no trouble enroute to his 27 point (11G+16A) standing. On the season as a whole, Bowen sits at 31 points (14G+17A) in 31 games. Those are video game numbers from the rookie Forward.

Brian Bowen is playing some of the absolute best hockey in the SPHL this season, and this weekend just continues to show off exactly what kind of offensive-power he can be. From distributing to scoring himself, he’s a nearly an unstoppable force.

We look forward to a titan tilt against Knoxville this weekend, with expectations for Bowen’s scoring to continue.