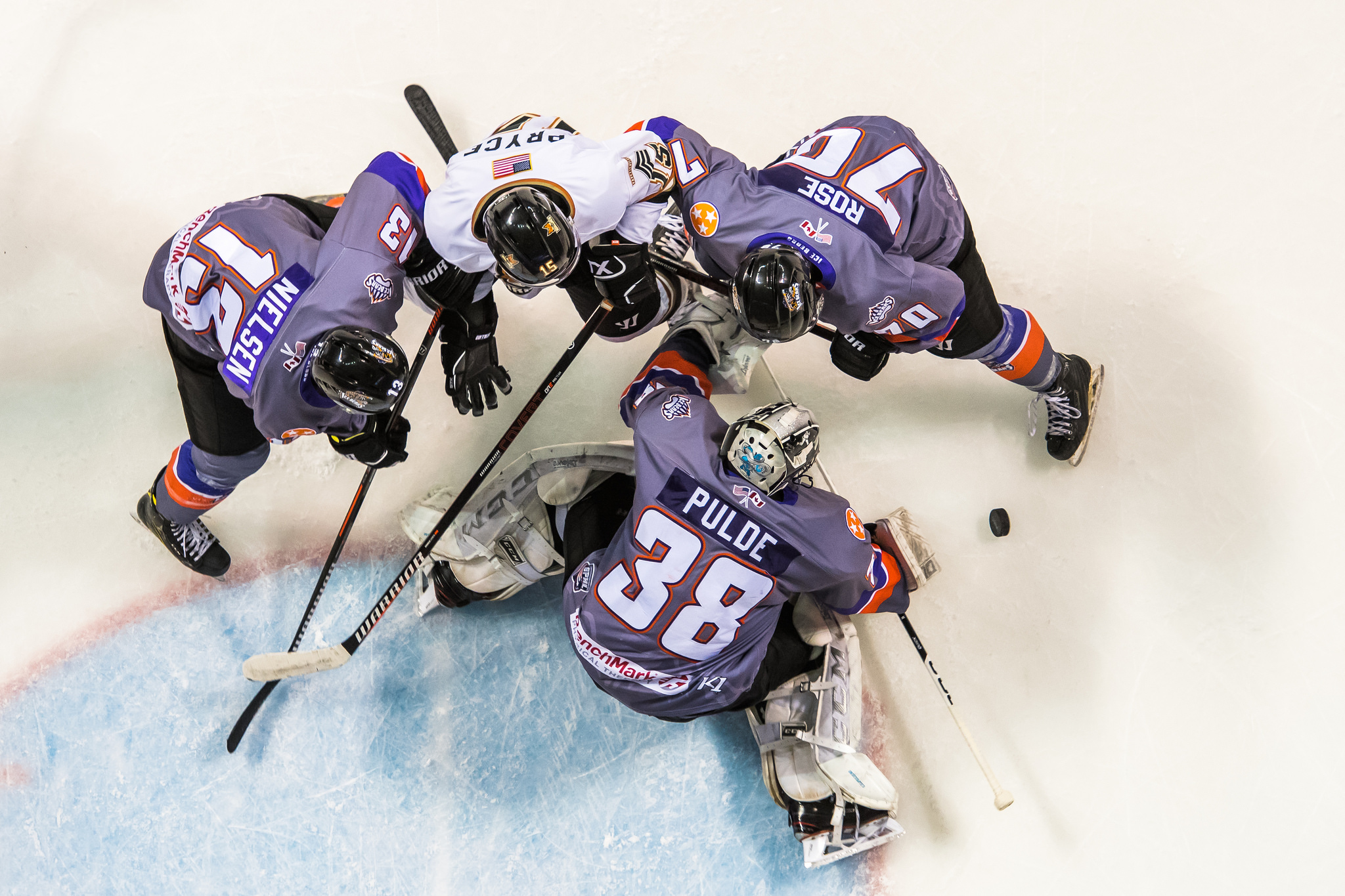 FAYETTEVILLE, N.C. – A winning weekend, and the Marksmen taking five of a possible six points against Evansville leads to a big series against Knoxville. Fayetteville takes the trip west of the mountains to Knoxville on Friday, their third trip to Civic Coliseum this season. The Marksmen split the first two meetings in Tennessee, besting the Ice Bears 3-2 in OT of their last meeting in the last game of 2018.

Saturday brings the boys back to town as the Marksmen host their sixth game in the last eight. This will also be Knoxville’s third visit to the Crown this season. The Ice Bears shellacked Fayetteville 7-2 in their last trip to the Crown – a rare outlier in an otherwise OT-heavy series.

Today starts a stretch of four in a row against these same Ice Bears, with next weekend will be the final battle between these two squads in the regular season.

Looking at these two teams, they’re very evenly matched. Fayetteville has scored 101 goals while giving up 108, while Knoxville is doing slightly-better as they’ve scored 105 and given up 103. This game is game number 34 for both teams, and both even come in with the exact same record at 17-12-4.

The special teams play will be very important and fun to watch this weekend. Fayetteville is second in the league on the power play at 21.4%, but don’t think Knoxville won’t try to get in the way of that. The Ice Bears come into the weekend with the top penalty killing unit in the league, killing an impressive 92.7% of opposing team’s power plays. Fayetteville looks to improve on their penalty kill, which is sixth in the league at 80.6%.

If these contests go off of the previous match-ups between these two squads, there will be goals. In the previous four games between these teams, the winning team scored less than four only once and twice scored five or higher. The Marksmen look to continue their hot offense, behind this week’s SPHL Warrior Player of the Week Brian Bowen. Bowen scored five goals and logged two assists last weekend, including a hat trick on Sunday. Forward Max Cook looks to keep his hot streak going, as he has recorded five points in as many games.

If we’ve learned anything of recent, goaltending is what will win a series and even improve playoff position. Coach Jesse Kallechy has a good problem when it comes to deciding who will mind the net each night. With goaltender Nathan Perry showing what he could do as a #1, with a 5-0-0-1 record in his first six starts with the team, it’s hard to go against the hot hand. However, with Dillon Kelley back from his stint with the ECHL’s Adirondack Thunder with a win on Sunday, he also presents himself as good choice in the crease logging a 10-8-1-1 record including wins in his last five starts.

Again, a good problem to have is two hot goaltenders; especially against a scoring-heavy Ice Bears team.

This weekend could be a huge one for the Marksmen, as a series win would give them sole possession of fifth place in the SPHL standings, where they are tied with Knoxville. They look to start strong this weekend as they play these same Ice Bears for two more games next weekend. The winner of this series is in prime position to move into fourth place as current fourth place, Huntsville is only three points ahead of Fayetteville and Knoxville.

With less than half the season remaining, every point matters as the Marksmen look to move up the standings and be in good position come April. You don’t want to miss this heavy-tilt.