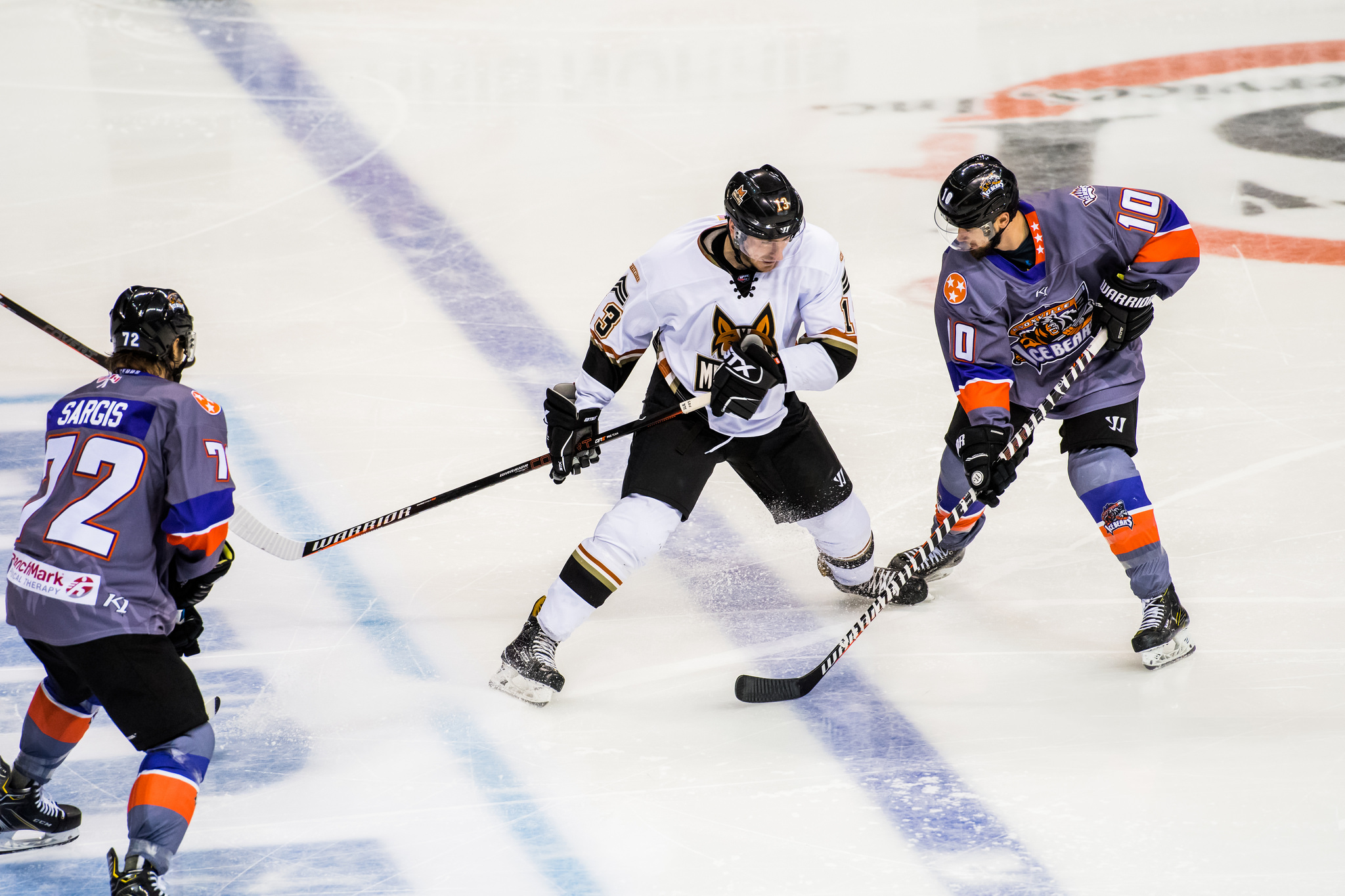 KNOXVILLE, TN – The Marksmen headed west to Knoxville on Friday, for the fifth edition of the Smoky Mountain Showdown, in a battle for sole-possession of fifth-place in the SPHL standings.

It didn’t take long for this game to show that it was going to be similar to every game these two have played thus far, as scoring started quick as Knoxville scored on only their fourth shot on goal. Bryce Nielsen sent his ninth goal of the season in past Marksmen netminder Dillon Kelley, making it 1-0 Ice Bears early first.

The Marksmen didn’t start the strongest, making some sloppy-errors, and allowing plenty of opportunities for the Ice Bears. Fayetteville didn’t let that stand for long; heading to the late first, a flurry of shots and a Knoxville penalty allowed Fayetteville to strike. Only eight seconds after a boarding call on Danny Cesarz, last week’s SPHL Player of the Week blasted one in. Brian Bowen’s fifth goal in the last three games tied the game at one. Once again, special teams was at the forefront of the match-up, and the Marksmen took advantage, strengthening their power play percentage to 22.3%, good enough for second in the league. After the horn sounded, it was 1-1.

The second period started as most do for the Marksmen, little offense and high defense. A pair of penalties cut the period in half, as the red light failed to shine in the beginning portion of the second. In the waning minutes of the period, the Marksmen finally found the net again, as defensemen Paul Fregeau scored his first goal with Fayetteville and in the SPHL. The goal gave the Marksmen a 2-1 lead with 3:38 left in the period.

That score didn’t stick for long, as the Marksmen found the net once again before the end of the second period. Following a Knoxville delay of game minor, Fayetteville’s power play showed their dominance once again. This power play only lasted seven seconds, contrary to the last one’s eight before Travis Jeke fired one that found the net from a Tatrn tip. After two, 3-1 Fayetteville.

The third period didn’t open up too well for the Marksmen as Knoxville scored just 2:33 into the period, and turned up the pressure immediately. Nothing was going for either team in the middle portion of the third, as no goals were scored for over 12 minutes.

Fayetteville finally found a break, as Taylor McCloy would breakaway from the back off a lead pass, and skirt around a risk-taking goaltender in Jason Pawloski – a gimme-goal for the win. The goal gave the Marksmen some breathing room at 4-2, but as they say, the most dangerous lead in hockey is two goals, and the Ice Bears attempted to prove that. With 2:38 remaining in the contest, Knoxville’s Marcus Ortiz scored, shortening the Marksmen lead back to one.

Knoxville tried to attack; under one minute to go, offensive zone draw, and an empty net – but the Fayetteville defense wasn’t having it. Fayetteville’s Tim Kelich poked it forward off the faceoff, and raced it down the ice to knock it in the empty net to ice the game for the Marksmen.

Fayetteville wins 5-3 and takes over sole possession of fifth-place in the SPHL standings before tonight’s home tilt against these same Ice Bears. With the victory, their sixth-straight on the road, the Marksmen have made franchise history with the longest-road winning streak of any season. The win improves Fayetteville’s record to 18-12-4, good enough for fifth in the league. The Marksmen look to sweep the weekend back inside the Crown on Saturday.