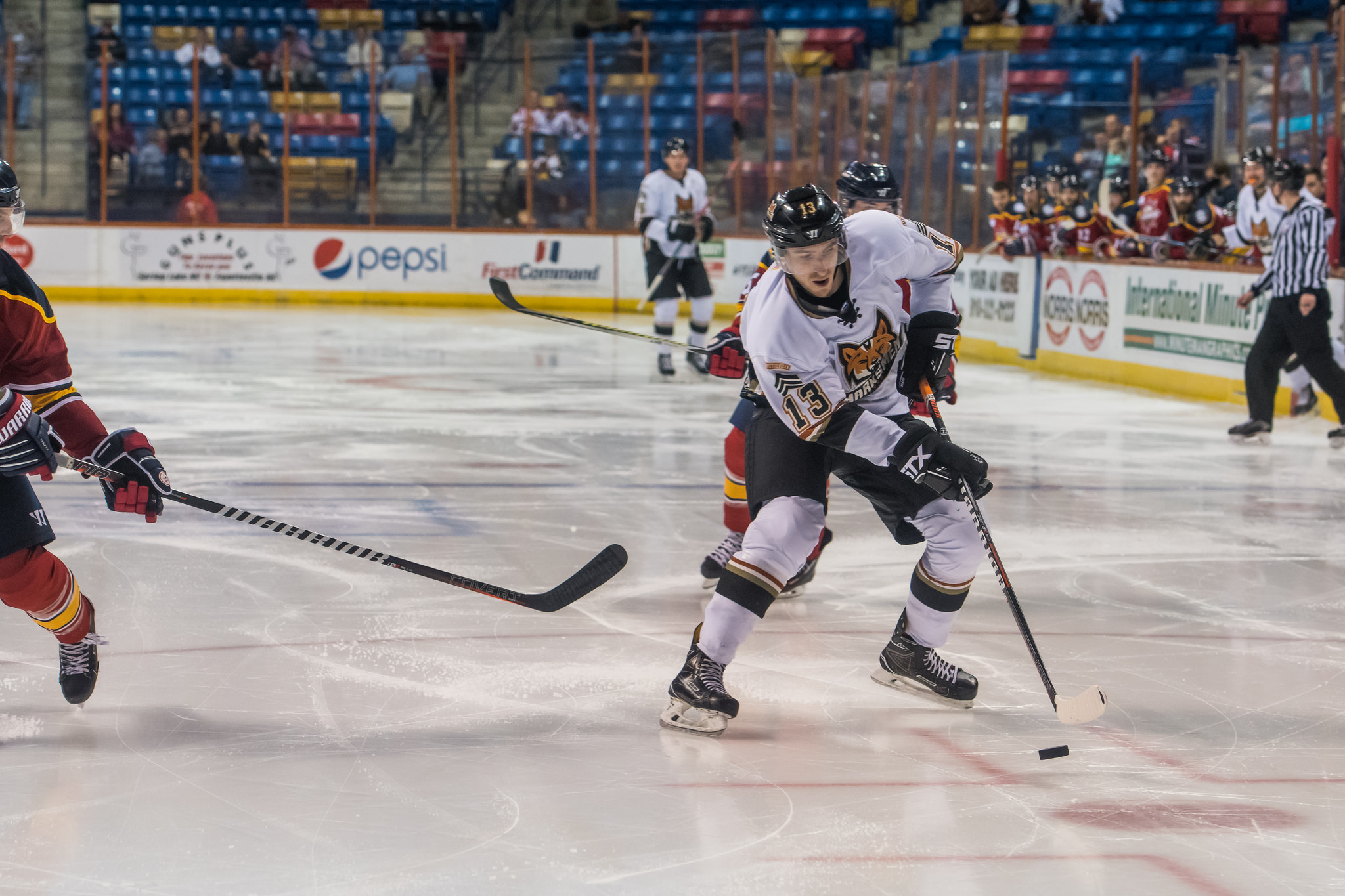 FAYETTEVILLE, N.C. – Coming off their first loss of 2019, the Marksmen looked to go back to their winning ways Friday against the last-place Thunderbolts.

Goaltender Nathan Perry got off to a hot start, saving five Evansville shots in the first 10 minutes. The game stayed quiet for the first 16 minutes, then the Marksmen came out to play.

With 3:38 left in the opening period, the Marksmen finally got it going, as Cody Brown dished off a pass to Nolan Sheeran and he opened the scoring in the contest. That goal was Nolan’s fourth on the season, his first since December 1st against Peoria.

The second period started very similar to how the opening period did; high-quantity, low-quality shots, and no scoring. The Marksmen had two powerplays but couldn’t convert, contrary to their recent success on the man-advantage.

With only five and a half minutes remaining in the period, Evansville tied it up as Captain Rory Rawlyk sent one past goaltender Nathan Perry, his first goal of the season. With the game tied at one, the Marksmen were determined to go into the dressing room with the lead after the period.

They wouldn’t have to wait long. Max Cook has been a real key player for the Marksmen of lately, finding the net three times in the last two games, and he didn’t change that Friday. With 2:31 left in the second period, Max Cook struck again, off of a pass from Travis Jeke. Cook’s fifth of the year, and fourth in the last three games into the net. That goal sent the Marksmen into intermission with a 2-1 lead.

The third period was penalty-heavy, after only 10 combined PIMs all game, the third was much different. Both teams had nine penalty minutes, including one fight between Nick Wright and Cory Melkert. Even with the penalties, neither team could convert – the Marksmen went 1-6 on the powerplay; Evansville went 0-3.

Period Three went without a score, and the game finished with a 2-1 Marksmen win. That win was their ninth in the last 10, improving their franchise best record to 16-12-3. With a Knoxville win last night, the Marksmen still sit a point behind them for fifth. With the loss, Evansville fell to 4-25-2, still without a road win all season and still winless when trailing after one.

Nathan Perry, once again, was the winning goaltender. The victory sends his record to 5-0-0, with just a 1.60 GAA. The Marksmen have more help inside the crease now, as Marksmen call-up Dillon Kelley was returned from the ECHL Adirondack Thunder.

Fayetteville looks to win the series as they host the Thunderbolts tonight at 6 P.M. in the Crown Coliseum for OPERATION: 8LACKOUT (pres. by Rustic Burger).

The Marksmen are back home on Saturday, January 26 for OPERATION: 8LACKOUT (pres. by Rustic Burger), with $8 anywhere tickets, $1 popcorn, and half-priced soft drinks, you can’t miss it.

Thunderbolts Hold Off Late-Momentum, Down Marksmen in Shootout Scroll to top