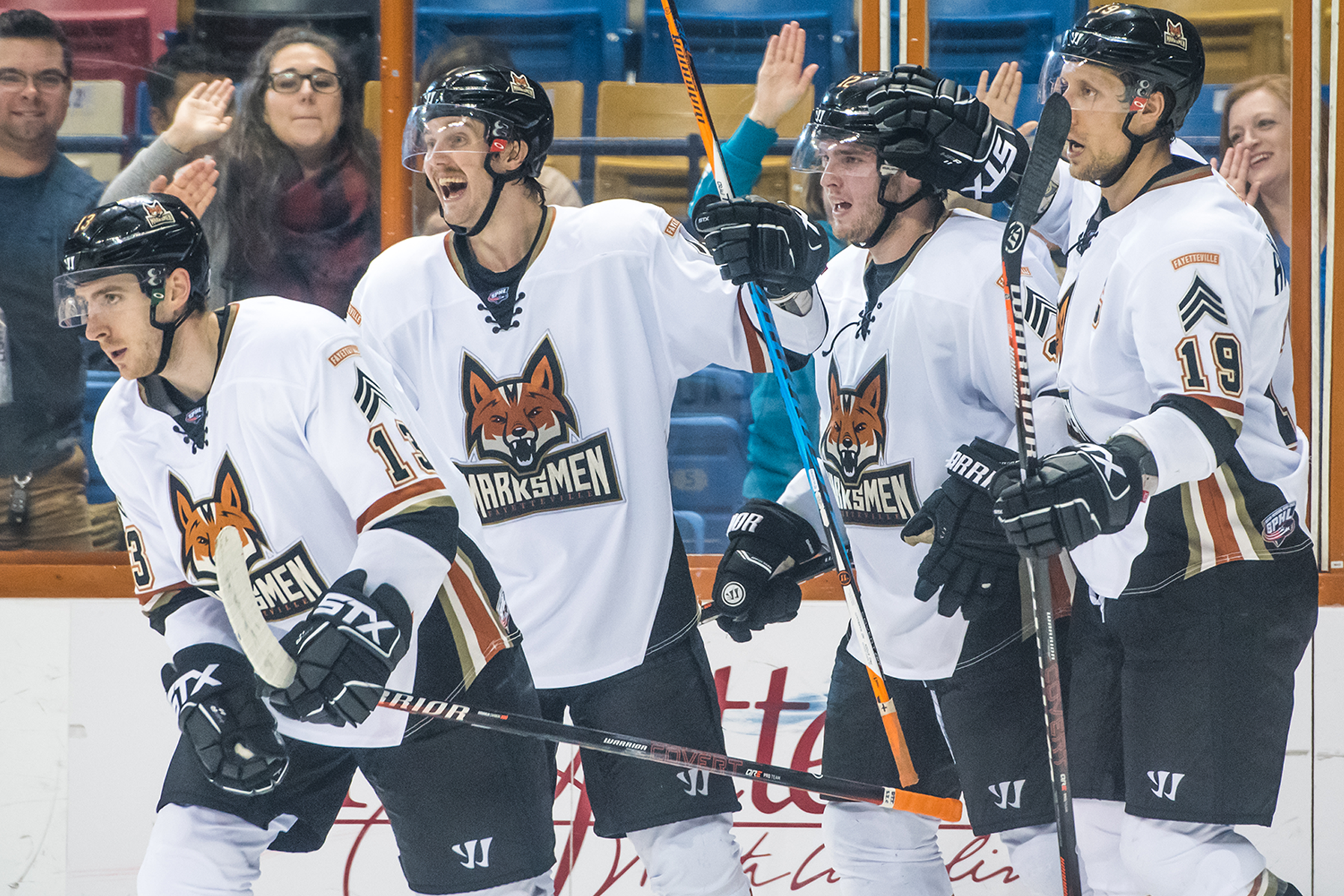 FAYETTEVILLE, N.C. – After a statement weekend in sweeping the #3 Peoria Rivermen last weekend, the ever-improving Marksmen welcome the top-team-in-the-league, the Birmingham Bulls to the Crown Coliseum for a Saturday and Sunday showdown.

Birmingham comes into the weekend after a disappointing 4-2 loss on the first game of their road trip last night in Roanoke.

Fayetteville learned from their early season mistakes and played two end-to-end games last weekend against the Rivermen. Dillon Kelley enters this weekend’s game on a high note after racking up a combined 53 save weekend against the Rivermen. The newly acquired Brian Bowen proved to a valuable asset to the young Marksmen team, racking up a goal and two assists in his first weekend in Fayetteville.

Rookies Cody Brown and Nolan Sheeran are red hot as of late. Brown was the offensive-catalyst in last week’s series, coming up with a four point night on Friday, and working hard in the corners Saturday. Sheeran has found his touch after a slow start, now recording six assists and three goals, including last weekend’s overtime winner. Defensemen Travis Jeke will look to continue his streak as one of the league’s hottest defensemen, leading the Marksmen team in points (14) with 10 assists so far.

The Birmingham Bulls are having an impressive season up to this point. The Bulls have an enviable 13-2-0 record, an incredible turn around from last season where the finished with a 22-28-6 record (ninth in the league). Goaltending for the Bulls has been at the top of their game this season as Mavric Parks was named STX Player of the Month. Parks has recorded 313 saves and has a .954 save percentage, getting one past him will be a challenge.

Craig Simchuk scored two of his four goals and an assist last weekend against the Ice Flyers. Simchuk is second in points with the Bulls, trailing Justin Larson. Larson (16 points) has seven goals and nine assists, proving he has no problem finding the back of the net.

Last night in Roanoke, the Rail Yard Dawgs scored in every single period enroute to a 4-2 win over the Bulls. Despite a relatively even game in special teams, shots, and period-by-period play, the Dawgs found enough to down Birmingham for just their second loss of the season. Fayetteville will look to keep the bad news train rolling for the Bulls as they come to the Crown with a day’s rest.

The Marksmen and Bulls start their weekend battle THIS Saturday and conclude on Sunday.

Saturday’s game drops the puck at 6 P.M, as the Marksmen will hit the ice in their one-night only Ugly Sweater Jerseys for the Ugly Sweater/Teddy Bear Toss night. With an Ugly Sweater contest, and the chance to throw bears on the ice after we score our first goal of the night, you won’t want to miss what promises to be one of the most fun games of the season. All bears tossed will be donated to the Fayetteville Urban Ministry & the Cumberland County Toys for Tots Program. Following the game, we will hold a LIVE jersey auction for the jerseys! You won’t want to miss your chance to own a piece of Marksmen history.

Sunday’s game is our first SUNDAY FUNDAY of the season, with puck drop at 3 P.M! Kids get in FREE with purchase of an adult ticket, and we’ll be hosting a Post-Game Skate with the Players for JUST $5. On top of that, our Old Chicago Sunday Funday deal gets you FOUR Upper End Zone tickets AND a large Old Chicago pizza for just $49! An unbeatable deal for a day of family fun.

You absolutely cannot miss this weekend, with great deals and an outstanding hockey battle ready to get underway. If for some reason you’re not able to make it out, the ‘Voice of the Marksmen’ Shawn Bednard will be bringing you the call on SPHLlive.com ($) or on the Marksmen Radio Network. We hope you’ll join us or tune in for an exciting weekend of hockey and family-fun.

Birmingham Cools Off Marksmen With 6-2 Win Scroll to top