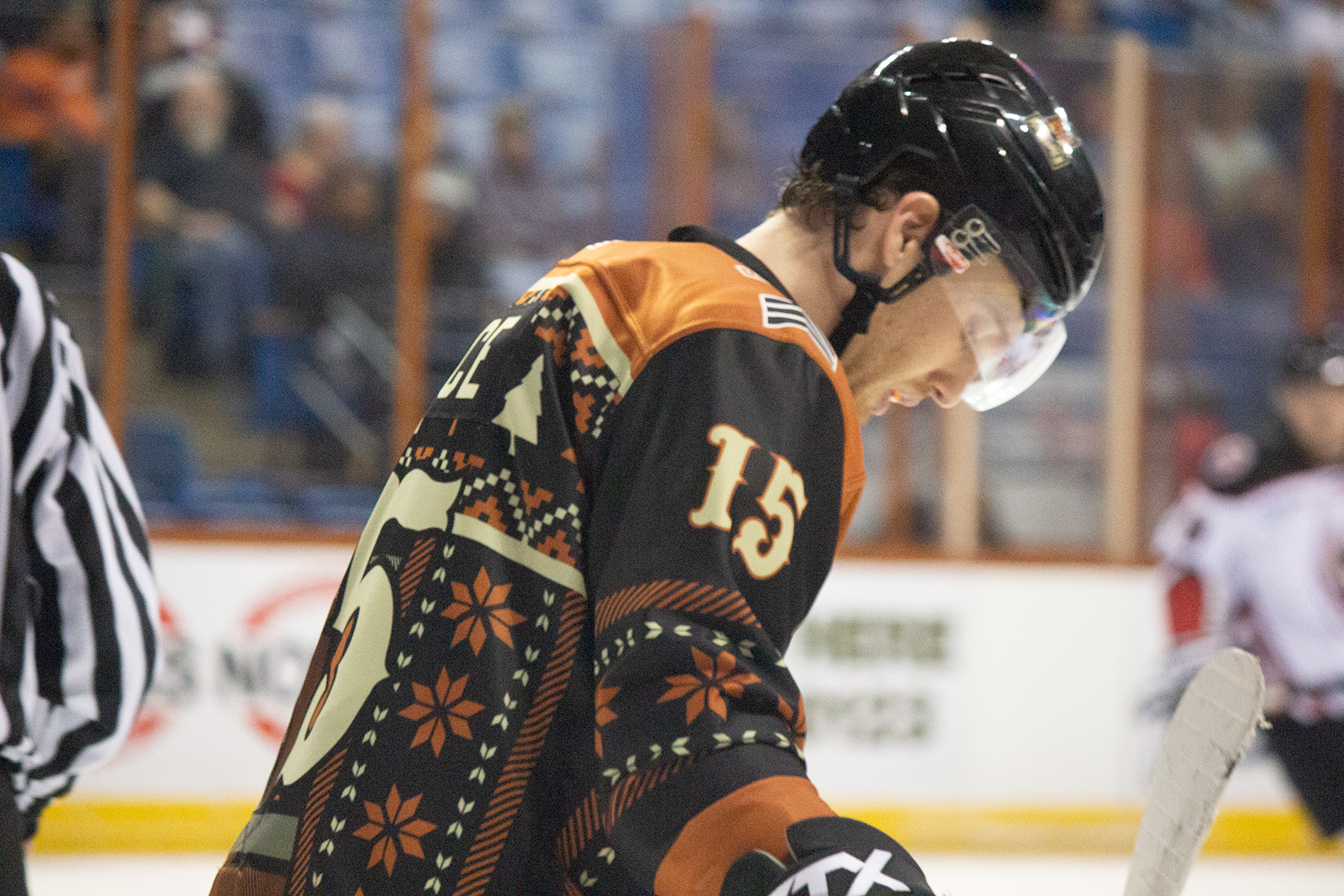 FAYETTEVILLE, N.C. – Facing a recently-losing #1 Birmingham Bulls, the Marksmen entered tonight’s game with momentum on their side. After sweeping the weekend last week against the Rivermen, the Marksmen looked to continue their winning ways and tame the Bulls.

Early in the first period, the two teams were relatively-evenly matched. After a low-shooting period, Alfred Johansson decided to awaken the atmosphere with his first SPHL goal nearly nine minutes into it. Johansson snuck one past Bulls Goaltender Charlie Millen, and would unleash the teddy bears into the Crown Coliseum. The period would end with the same flow, as the Marksmen would take a 7-6 shots advantage and a 1-0 lead into the intermission.

As the second period began, things looked bright for the Marksmen. With an early lead and a solid first period, the Marksmen had the Bulls in the right direction. As the period began, the Bulls picked up steam and attacked the net often. Loren Ulett forced one passed Dillon Kelley, tying the game at 1-1. With Ulett’s goal, the Bulls took the momentum right out of the sails of the Marksmen. Mike Davis found the back of the net for the Bulls shortly after Ulett and suddenly the momentum shifted in the direction of the Bulls, up 2-1. Evan Schultz wanted in on the action, shooting one passed Dillon Kelley and finding the twine for another Bulls goal. With the Bulls up 3-1, the Marksmen were searching for answers on their defensive front.

Jacob Barber refused to let the Marksmen have any chance of making a comeback, getting one past Kelley for the final time. Dillon Kelley was pulled from the net and a fresh Alex Murray entered the crease for the Marksmen. Brian Bowen was handed an elbowing penalty and he skated his way to the Kevin Jones Plumbing Penalty Box. While the Marksmen were on the PK, a short-handed odd-man rush presented itself, as Tim Kielich lead the charge down the ice, and scored his fourth goal in four weekends. With the Marksmen now at a 4-2 deficit, things could still turn around for the Marksmen.

Just as things appeared to be turning around for the Marksmen, Travis Jeke was handed a high sticking penalty. With Jeke in the box, the Bulls had another scoring opportunity. Jacob Barber found the back of the net once again for his second goal of the night. With the fifth goal of the period, the Bulls were just adding salt to the wound of the Marksmen.

The third period began and the Marksmen needed to stop the bleeding any way they could. The Marksmen owned seven of the first eight shots-on-goal, looking to give their team life. Joe Osaka was given a kneeing penalty, putting the Marksmen back on the penalty kill. Unfortunately, the Marksmen couldn’t kill off the penalty and Jacob Barber earned himself a hat-trick. With Barber’s hat-trick, the Marksmen struggled to survive the rest of the game. As the horn sounded, that concluded what was a rough game for the Marksmen as they fell to the Bulls 6-2.

The Marksmen are back in action tomorrow afternoon at 3 P.M. in a rematch against the Bulls, for our Sunday Funday! Kids under 12 get in FREE, and we’ll have a Post-Game Skate with the Players that you won’t want to miss.

If you can’t make it out to the Crown Coliseum tomorrow, you can always catch the game on SPHL Live and the Marksmen Radio Network as the “Voice of the Marksmen” Shawn Bednard brings you the action.

The Marksmen are back home Sunday, December 9 for Sunday Funday. Tickets are available now by calling the Marksmen office at (910) 321-0123 or clicking on the date above!