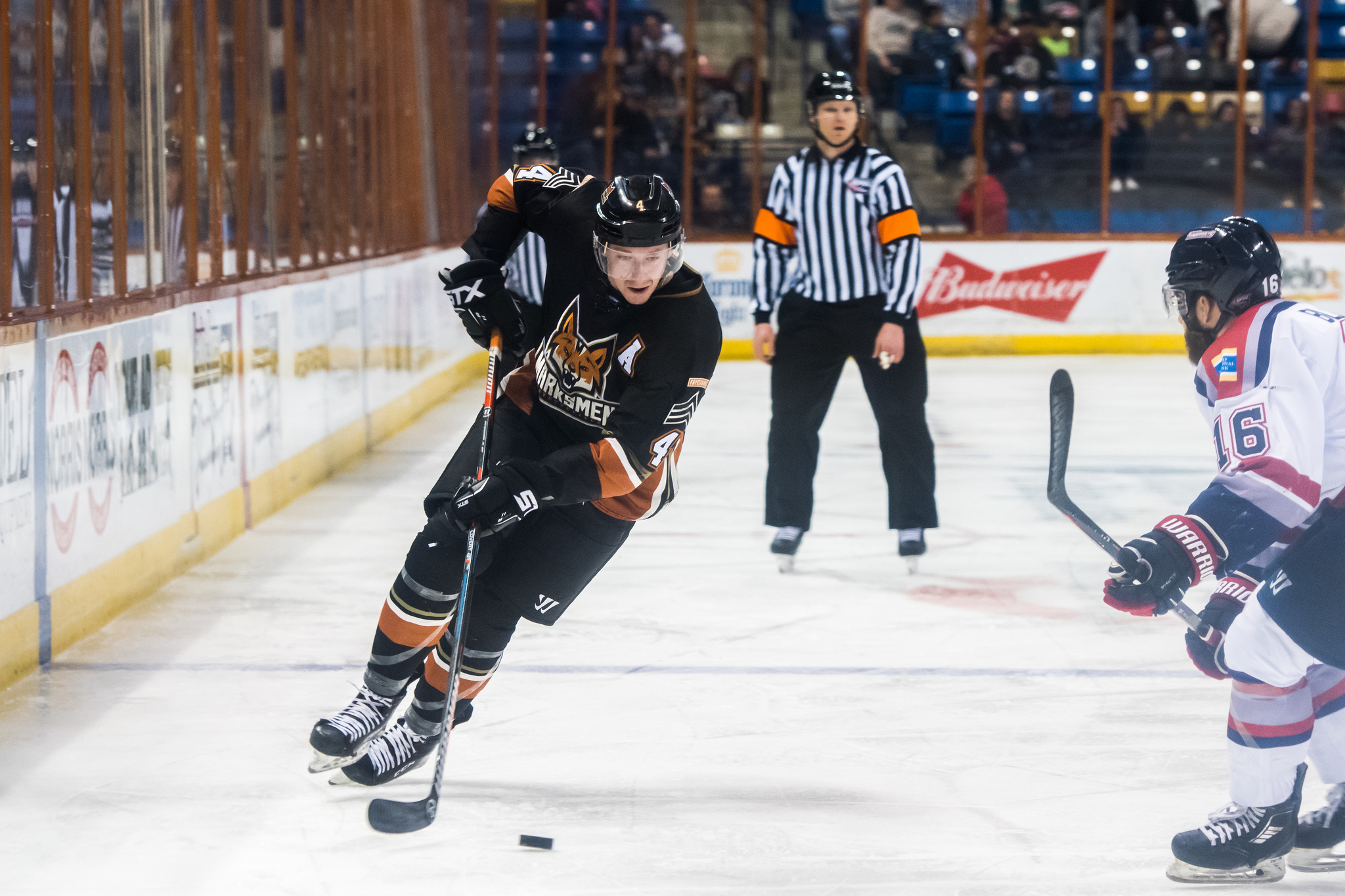 FAYETTEVILLE, N.C. – Heading down to Pensacola, the Marksmen knew that the odds were against them – two of their best scorers were called up to the ECHL within the last week, and they’d only skated once during the week before their Friday Morning Skate.

However, and especially in a race this tight, every point matters. For Fayetteville to at least comeback with half of the possible points, while not a point of pride by any players or coaches standards, is better than to come away with one less of any of those earned points. Credit Pensacola, they’re playing some of the best hockey in the SPHL right now, and these two teams had to earn everything against each other in three overtime affairs.

Not to mention, revenge is a dish best-served on home ice, as Fayetteville welcomes the Ice Flyers for three-in-four this weekend, starting on Thursday morning for Education Day.

That being said, there were a number of noteworthy efforts in a hard-fought weekend.

Here’s our pick for the Three Stars of Week 18.

When it comes to underrated pieces of the Marksmen team, Tyler Palmer’s defensive-efforts far-too-often go unnoticed. As a stay-at-home, keep-em-honest defenseman his name isn’t most often seen on the scoresheets, so it’s easy to understand how some could not keep him on their radar in a scoring league.

However, Palmer does one thing incessantly well, and that’s keep the other team from scoring. Especially in this weekend’s contest, Palmer’s physical, back-checking efforts were a sight to be seen.

In fact, at one point in the game, Palmer kicked a puck away from an open net to keep a tight game tight. He played a very controlling, lockdown kind of defense in what amounted to being a weekend of long-winded offensive zone possessions from the Ice Flyers.

As an alternate captain, Palmer is always seen talking with the guys before a faceoff, and making sure everyone is on the same page. His play stepped up where it was needed this weekend, and his effort was not unnoticed. Expect him to play shutdown this coming weekend as the Marksmen look for revenge.

Expectations were uncertain for Forward Mitch Atkins, acquired off waivers with Fayetteville’s #1 waiver spot, heading into a weekend where he’d had little time to learn the systems.

Leaving Pensacola, we were treated to just what Atkins had to offer when given the opportunity.

Atkins stats in the SPHL weren’t the flashiest in his stints in Evansville and two games in Birmingham – just three points in 16 games. What was not shown on the scoresheet apparently, was just how heavy of a game he can play.

Hard on the puck, physical on the forecheck, and an aggressive presence around the net made Atkins a bit of an unexpected feature this weekend, and he was rewarded for his positioning and play with a goal in Saturday night’s game.

The Marksmen needed a body, with Cody Brown injured, and two premier scorers in Bowen and Mazurek still in the ECHL. Atkins not only brought another forward for the Marksmen, but a player with an impressively competitive-hunger and intensity.

What was a question mark formed more into an exclamation point, and makes the move from Coach Kallechy look like another solid addition.

Scoring was no stranger to this weekend’s series, and Max Cook found himself, once again, as an over-a-point-a-game-scorer.

With two goals and two assists in the three games, Cook’s impact was obvious both on the score sheet, and from watching the way he lead play alongside Hauswirth and Sheeran.

When you watch Cook handle the puck, especially against a team as rough on the puck as the Ice Flyers are with their suffocating backcheck, you truly get to see how skilled of a forward he is.

He controls the puck with one hand on the stick and one hand to hold off the defender, and is still able to execute great passes and keep the play alive inside the offensive end.

On Sunday, when offense came at a premium, Cook was there to put one into the back of the net for what was the lone goal of the game for all-of 58 minutes.

An impressive offensive effort once again keeps Cook looking like the Forward the Marksmen wanted when he signed here, and needed without Bowen, Mazurek, and Brown available.

You know what to expect from him this week.

Pensacola, Fayetteville Battle in Another Three-Game Series Scroll to top