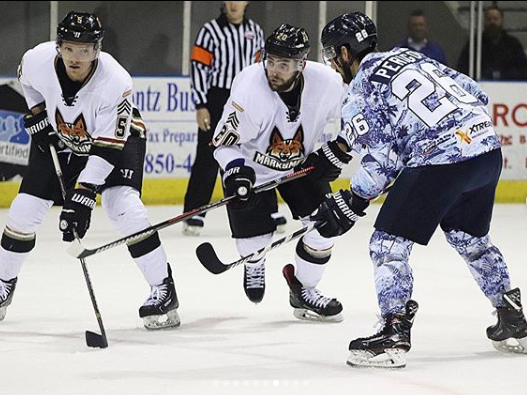 Sunday’s game started out relatively uneventful – though better for Fayetteville than of late. Other than a few shots on net, nothing happened for the first 17 minutes of the opening period. The Marksmen needed to do something before the end of the period, and they did.

With 2:48 left in the opening frame, Fayetteville finally found the net as Max Cook sent a puck into the twine, giving the Marksmen the lead at 1-0. Adding on to the low score, neither team accumulated a single penalty minute in the first, and low penalty numbers would stay for the entire game as a theme.

Moving on from the first with the lead, Fayetteville was looking good for the game. Goaltender Nathan Perry had been making all the saves with relative ease, and the time of possession seemed even. Following the uneventful first, something had to happen in the second.

A second period without a large number of shots played through with nothing. Over 16 minutes into the period, the whistle was blown for the first penalty of the day. Pensacola went to the box for two minutes, giving Fayetteville a golden opportunity. The Marksmen couldn’t get anything going, putting a no shots on net with the man-advantage. The shotless power play sent the teams to the dressing rooms, Fayetteville still leading 1-0.

Moving into the third, the Marksmen had been playing an almost perfect game. No penalty minutes, no goals allowed and the lead. The only issue, was that the lead sat at just one.

The third period got underway and little changed. Neither team got called for a penalty, meaning only a single minor penalty was called during regulation. Both teams had their lowest shot numbers per period in the third, with Fayetteville only shooting five times over 20 minutes.

After an empty 18 minutes, Pensacola called a timeout and pulled Goaltender Brian Billett in favor of an extra skater – that decision proved to be a good one, as a minute later Pensacola tied the game on their 33rd shot. That goal, tying the game at one, made an extra period of hockey necessary for the third day in a row – though gave Fayetteville another necessary point.

The overtime period was all-Ice Flyers. Fayetteville failed to even send a single shot on the net during the extra five minutes. Nathan Perry held strong, saving all eight of Pensacola’s shots. Fayetteville finally got blown for their first penalty in the game in the extra period as Perry would throw a punch protecting his crease. Ultimately not mattering too much, as it came with under a three seconds remaining.

An empty extra period sent the game to a shootout. Fayetteville was looking for their first shootout win of the season, as they come into the game at 0-2 in shootouts, while Pensacola looked to stay above .500, coming into the shootout at 3-2 on the season.

Both teams opened up by making their first shots in the shootout, Travis Jeke for the Marksmen and Garrett Milan for Pensacola.. The next four rounds would be won by the goalies, with no goals crossing.

Round six would be a winner-take-all round, as Travis Jeke would head out once again for the Marksmen, but was unable to capitalize. Pensacola’s Garrett Milan made his shot, his second in as many attempts, winning the shootout for Pensacola.

The loss for Fayetteville means a weekend sweep, but though they failed to win, Fayetteville still made it out of Florida with three points. Fayetteville now sits in sixth place, two points behind Knoxville and Macon. The six point weekend for Pensacola was huge for them, as it strengthens their spot in the playoff picture, now eight points ahead of Quad City.