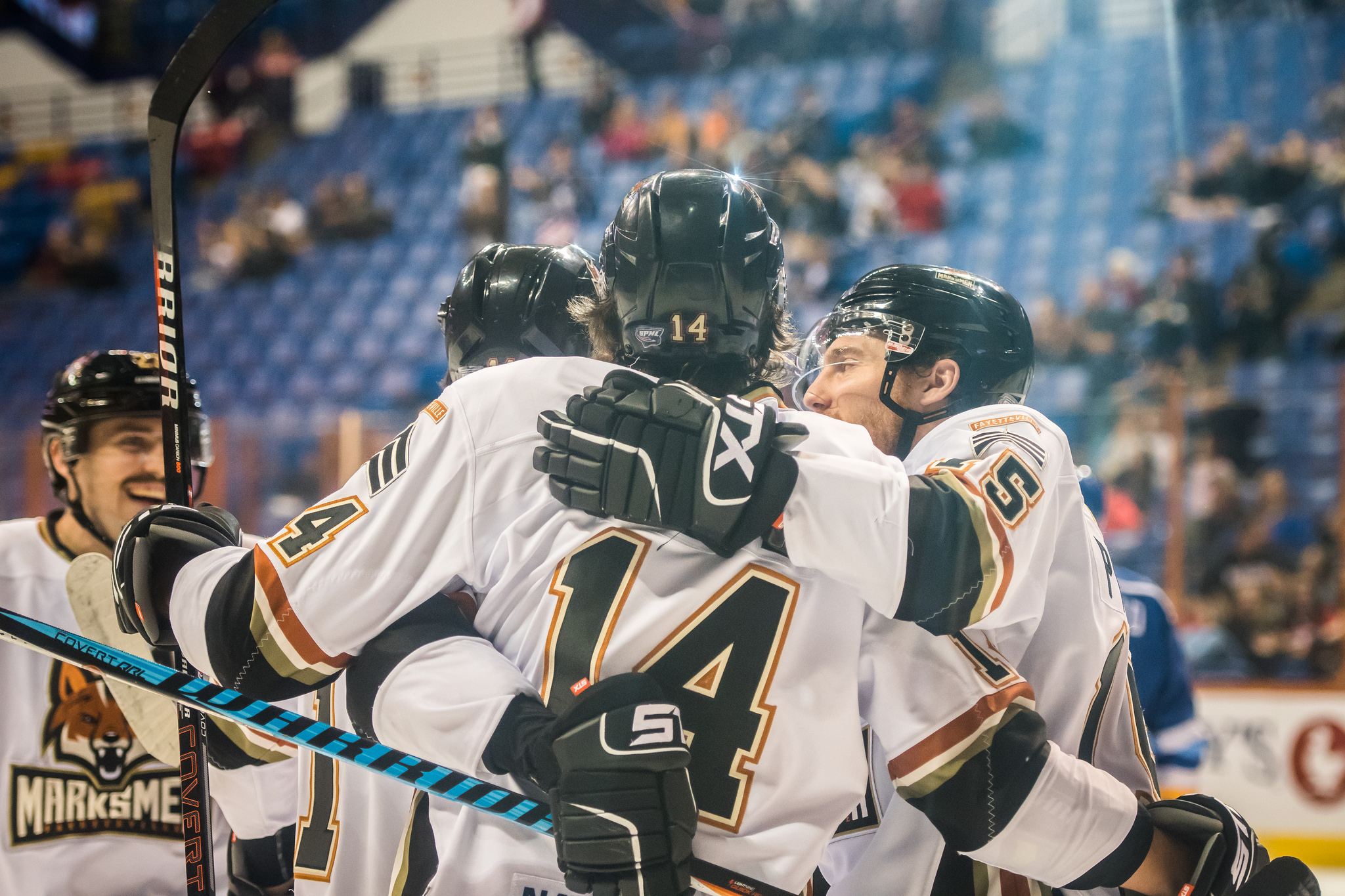 FAYETTEVILLE, N.C. – Welcoming in rivals Knoxville and Roanoke for a home weekend, the Marksmen looked to continue their pursuit for fourth place in the SPHL, just behind defending champion Huntsville.

With an exciting game on Friday leading to Tim Kielich’s overtime winner, his first goal of the season, to down Knoxville, the Marksmen had locked up their third-straight game with a point, and second-straight overtime win.

Fayetteville would not quite get the result they wanted on their Saturday evening weekend finale, dropping a tough 4-2 decision to Roanoke behind Dawgs’ goaltender Tanner Creel’s 43 save night. Despite the result, Fayetteville would still stay right in the top half of the league standings, and have a chance for revenge heading into Thanksgiving weekend.

What the Marksmen proved this weekend, despite the loss to a Roanoke team they’ve mostly dominated this season, is that they can and will compete against anyone. The story with Knoxville is always one of being the most physical team on the ice, whereas Fayetteville has been considered this season as a team that doesn’t focus on their physicality and checking game. However, Fayetteville made Knoxville play their style for much of the night, and when needed matched the physical intensity.

The Roanoke game was the story of a hot goalie and a Marksmen team that couldn’t quite get puck-luck. It’s not a great loss, but is a stumble more than a trip for the team. Regardless of it, the Marksmen took five points out of the possible eight in their last four games.

Three Stars shined to take Friday night’s win, and the look ahead for revenge from Saturday night on Thursday. Here’s who made it possible.

Honestly, McCormick is seemingly a lock for at least ONE mention in the Three Stars of the Week EVERY SINGLE week. Darren is playing a fast-and-loose style of offensive hockey that is making him an absolute asset right now for the Marksmen.

On Friday night, he did it once again coming up with two goals enroute to the overtime victory over Knoxville.

McCormick is a relentless puck pursuer, regardless of its position on the ice. With a line of Mazurek and Sheeran, he knows that he’ll get that same mentality out of both his partners. These three play with a hive mind, and at times seem to know where the other is before ever even needing to look.

There’s a reason that Mazurek and McCormick are team leaders in goals and points, and the impressive streak will only continue. Don’t anticipate Darren to cool off any time soon, he only seems to be finding his stride and shot more comfortably as the season progresses, and with a weekend triad against Roanoke and Knoxville, he could be in for a fun weekend.

Tim Kielich is a hard-working forward for the Marksmen. A good centermen who looked impressive out of the gate in Training Camp. He’s had opportunities around the net through the first ten games, but hadn’t been able to get that one through, yet.

Scene: Less than two minutes left in overtime at home. Knoxville has been cramming shots the entire extra period, and the Marksmen just went off for a line change. Tim stays out, just looking to start off an offensive shift for the team and get some shots.

Instead, Kielich enters the zone from the right side, head fakes a defender, finds himself alone in the mid slot skating left, he shoots right, and beats Knoxville goaltender Santaguida to win it for the Marksmen.

Quiet, hard-working, good citizen Tim Kielich gets mobbed by his teammates near the bench, and becomes the Friday Night hero for the fans.

Don’t expect this to be the last for Kielich for some time. He’s been around the net and fired off shots this season, but now that he has the scoring monkey off his back, it could be high time to start racking up some goals.

Travis Jeke has been a dynamo this season for Fayetteville. During the offseason, the mentality of Head Coach Jesse Kallechy for his defensemen was that offense was going to have to be part of their game, and that the offense would start at the blue line.

Jeke has been the model defensemen for doing JUST that this season. Unselfish on the blue line, laying his body out to block shots, backchecking and covering mistakes when they’re made has been just one part of his game.

Coming into the weekend, Jeke was already top five in the league in assists, which accounted for all of his points (8). That’s not to say for a lack of shooting, as he was an absolute shooting gallery when the team traveled to Evansville and Peoria.

Finally this weekend, Jeke was able to get himself in the goal column – twice.

On Friday, it was the tying goal while streaking down the right wing side off a drop pass. The Marksmen would never trail again in the game after that point.

HIGHLIGHT: Jeke with the water bottle shot to tie the game at 1!#FearTheFox🦊 pic.twitter.com/ijk1OTevH1

On Saturday, he would EXPLODE back into the goal column. Ten seconds after the Marksmen knotted the game up in the first off of Greco’s first of the season, Jeke would fly out of the faceoff dot at Center Ice and absolutely rocketed one for the Marksmen lone lead of the game, 2-1 at that point.

Travis Jeke has been a hot returnee for the Marksmen, and a welcome sight with his offensive contributions and defensive abilities. Now that Jeke has finally hit his target, expect his game to start to shape into a perfectly rounded object.

Fayetteville has a short week of preparation, with the team hitting the road for Roanoke on Thursday morning for the Dawgs annual Thanksgiving Day game. Following the final whistle, the Marksmen will then bus over to Knoxville for a home-and-home with the Ice Bears.

The Marksmen are back home THIS Saturday, November 24 for Rednecks, Racing, and Wrestling Night. Tickets are available now by calling the Marksmen office at (910) 321-0123 or clicking on the dates above!

Despite 45 Shots, Marksmen Lose 4-2 to Roanoke

Marksmen Comeback For Seconds, Down Roanoke 4-2 on Thanksgiving Scroll to top