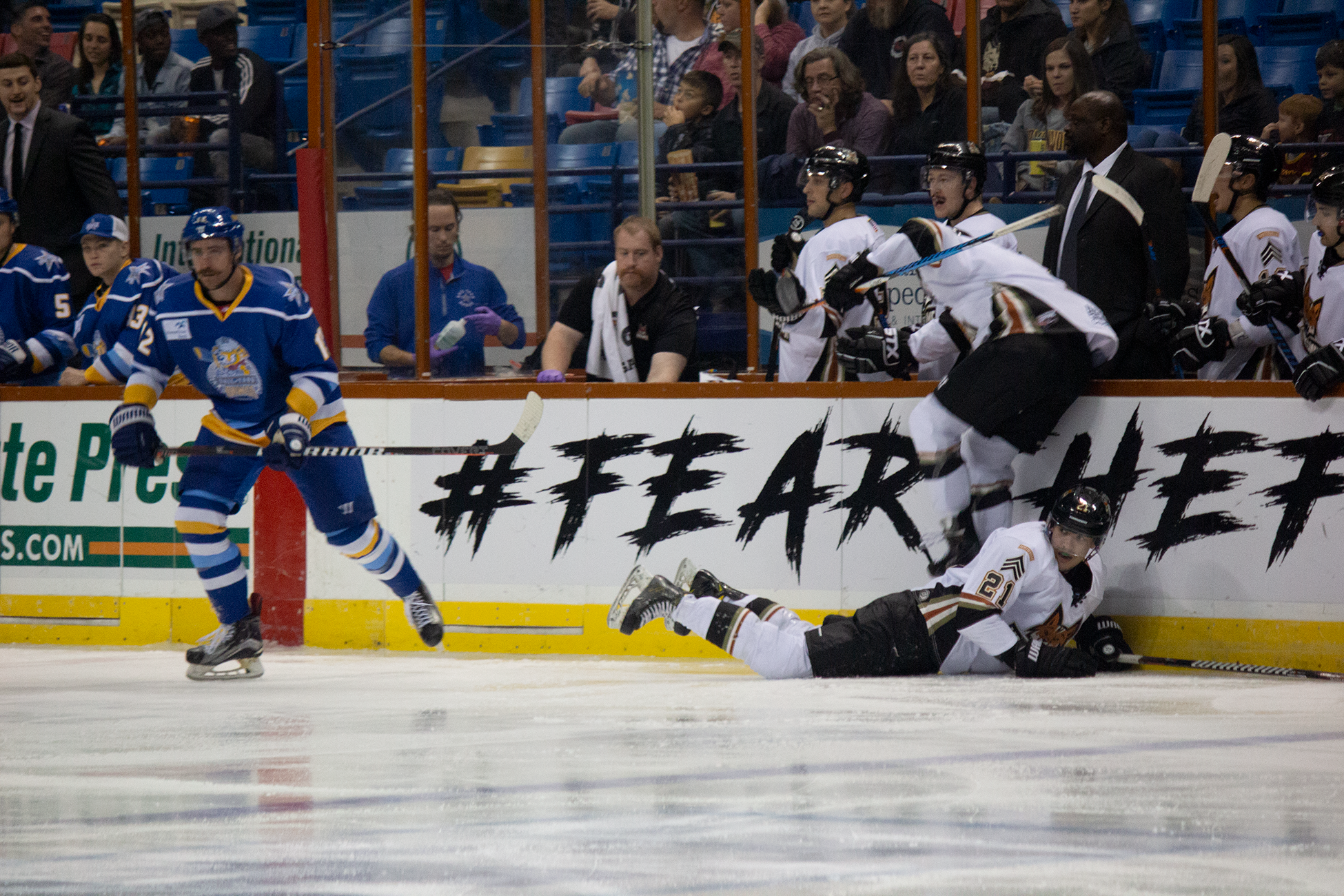 FAYETTEVILLE, N.C. – Riding the high off of a late home OT win, the Marksmen looked to earn their first weekend sweep of the season against their rival Roanoke. Unfortunately for Fayetteville, Roanoke came to town with other intentions.

The puck was dropped and another chapter in this rivalry was being written. Just 1:22 into the game, Jeff Jones snuck one past Alex Murray for his second goal of the season, and gave Roanoke a very early lead. Fayetteville attacked the net constantly, not giving Dawgs Goaltender Tanner Creel any rest. With a power play in hand, Carl Greco capitalized and found the back of the net, tying the score at one.

Ten seconds later, the Marksmen pressure remained, as Travis Jeke ripped a beautiful shot, scoring his second goal of the weekend, and the season. Fayetteville would fire 17 shots in the period, and ride a heavy momentum into the second.

The Rail Yard Dawgs, however, were the team to come out of the gate flying. Cody Dion and Colin Murray both scored on the power play for the Dawgs just five minutes into the period. Nine minutes after the first goal of the period, Lane King got the puck past the pads of Alex Murray and gave the Dawgs a 4-2 lead.

The third period saw the Marksmen attempting a furious offensive-sleight, but to no avail. In a 17 shot period, with plenty of chances and time in the offensive end, Roanoke goaltender Tanner Creel did as he’d done for all but 10 seconds, and stood on his head. Creel stopped all 17 in the period, and made 43 saves through the course of the night to steal a Roanoke win in Fayetteville, 4-2.

Fayetteville will have little time to rest, as they’ll be back against the usual suspects starting Thursday night in Roanoke for the city’s tradition of Thanksgiving Night Hockey. Right after the final horn, the Marksmen will make their way west to Knoxville, with a home-and-home on tap against the Ice Bears.

The Marksmen are back on SATURDAY as they host the Ice Bears for REDNECKS, RACING, AND WRESTLING NIGHT at 6 P.M! Join us for YOUR chance to win FOUR TICKETS to WWE Live! on January 6 at the Crown Complex, not to mention a Power Wheel Derby race during the game, and your chance to take one home. You won’t want to miss a night of southern-fried hockey fun.

We hope you’ll join us at the Crown Coliseum on Saturday. You can listen to this week’s games on MarksmenRadio.com or on SPHLlive.com with the Voice of the Marksmen, Shawn Bednard.

The Marksmen are back home THIS Saturday, November 24 for Rednecks, Racing, and Wrestling Night. Tickets are available now by calling the Marksmen office at (910) 321-0123 or clicking on the dates above!