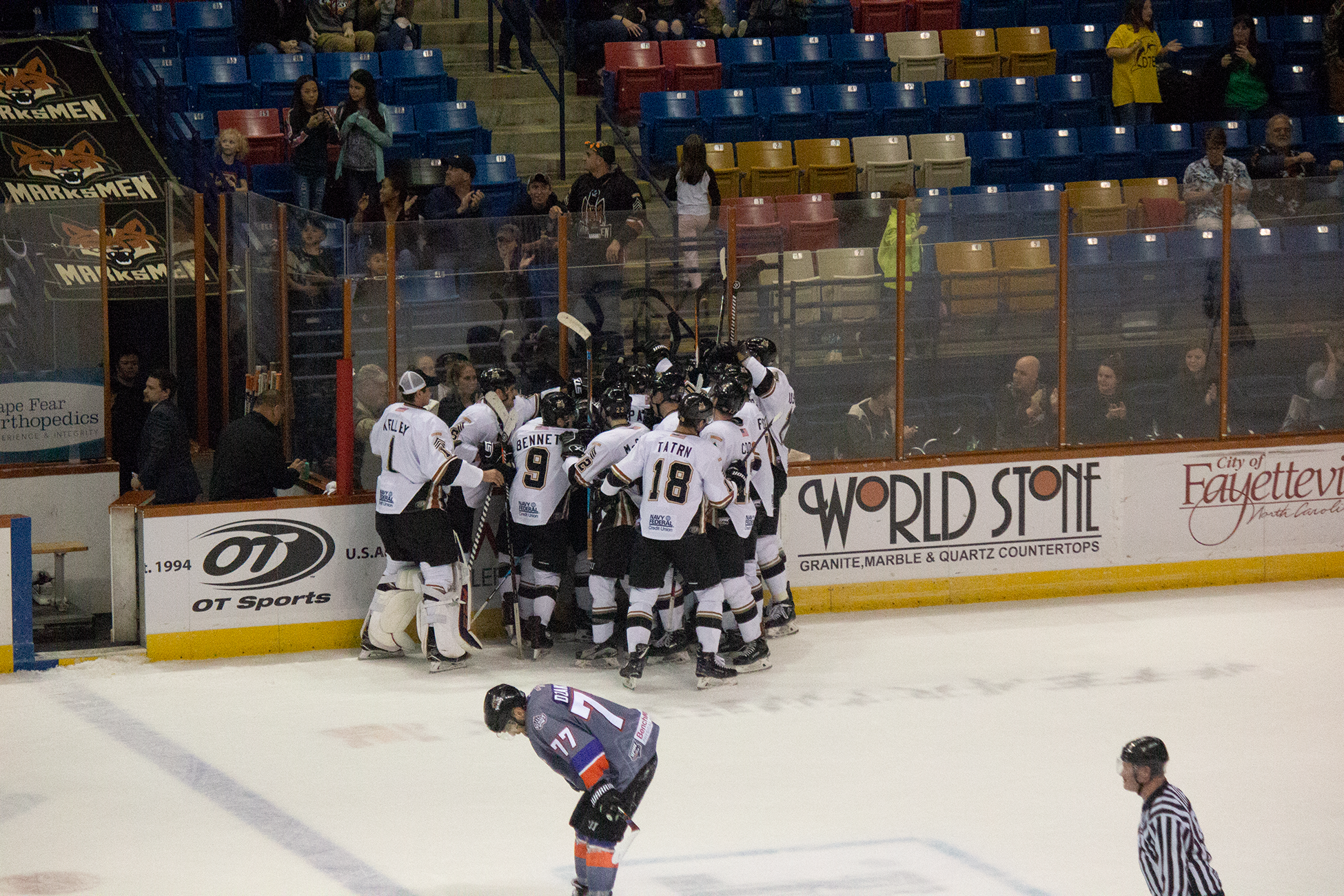 FAYETTEVILLE, N.C. – Fayetteville welcomed their rival Knoxville Ice Bears to the Crown Coliseum for what was an intense game. The Marksmen and Ice Bears traded blows and goals in this classic.

After the Bojangles puck drop, it was a tightly contested matchup between the Ice Bears and Marksmen. Going scoreless for almost the entirety of the first period, the Marksmen needed something to power them past a solid Ice Bears offense. Alex Murray was in net for tonight’s game and he didn’t disappoint.

For the most part, the first period was rather clean. Alex Adams was handed the only two penalties for the Ice Bears, being called on a slashing and kneeing penalty. Just when it appeared the Marksmen scored but was retracted as Ice Bears goalie Michael Santanguida’s helmet was knocked off. Tim Kielich was called for a hooking penalty, and as anticipated the Ice Bears capitalized. Eliot Grauer snuck one past Alex Murray, giving the Ice Bears the early lead.

As the second period began, things picked up for the Marksmen. Carl Greco was called for a hooking penalty early in the second period. Things really started heating up as Taylor Pryce and Lucas Bombardier dropped the gloves and traded blows. Travis Jeke found the inside of the net, scoring his first goal of the season. Alex Murray continued to impress, coming up with huge saves for the Marksmen.

Darren McCormick had to get in the action, sneaking one past Michael Santanguida giving the Marksmen a 2-1 lead. The Marksmen were called for too many men on the ice putting them on the penalty kill. Taylor Pryce had a beautiful break away, only to be tripped up and was handed a penalty shot. Although Pryce was unsuccessful in his penalty shot, it was the first for the Marksmen this season. Stanislav Dzakhov scored for the Ice Bears, evening the score at 2-2.

When the third period started, it was apparent the Marksmen and Ice Bears were evenly matched. Darren McCormick wasted no time proving that statement wrong, scoring yet again. That goal was McCormick’s second of the game and eighth of the season. With the Marksmen leading 3-2, they spent the majority of the period on defense trying to hold their lead. The Marksmen were very impressive on the penalty kill tonight, they were 7-for-8 on the PK at this point in the game.

Stanislav Dzakhov rallied his Ice Bears once again, scoring his second of the night. Kyle Thacker had a beautiful break away, setting up an absolutely amazing shot-on-goal that was stopped. Alex Murray blocked so many shots that could have put this game away, allowing the Marksmen to enter overtime again this season.

This overtime was the third in a row for the Marksmen, coming off of back-to-backs in Peoria. After an onslaught of offense from the Ice Bears, with multiple scoring chances, the Marksmen would finally get assistance from a clear. Tim Kielich would pick the puck up loose in the neutral zone, move it to the mid-slot, and scored his first SPHL goal in dramatic fashion, the overtime winner. With the final, the Marksmen have earned back-to-back overtime wins, and their first OT win at home.

We’re back in action tomorrow night as we host our rival Roanoke for a 6 P.M. tilt on Wizardry Night! Fans are invited to stay after the game for a Post-Game Skate with the Players. This skate is FREE for all in attendance, $5 for skate rental (limited quantities available).

The Marksmen are back home THIS Saturday, November 17 for Wizardry Night. Tickets are available now by calling the Marksmen office at (910) 321-0123 or clicking on the dates above!

Physical Homecoming Ahead for Maturing Marksmen

Despite 45 Shots, Marksmen Lose 4-2 to Roanoke Scroll to top