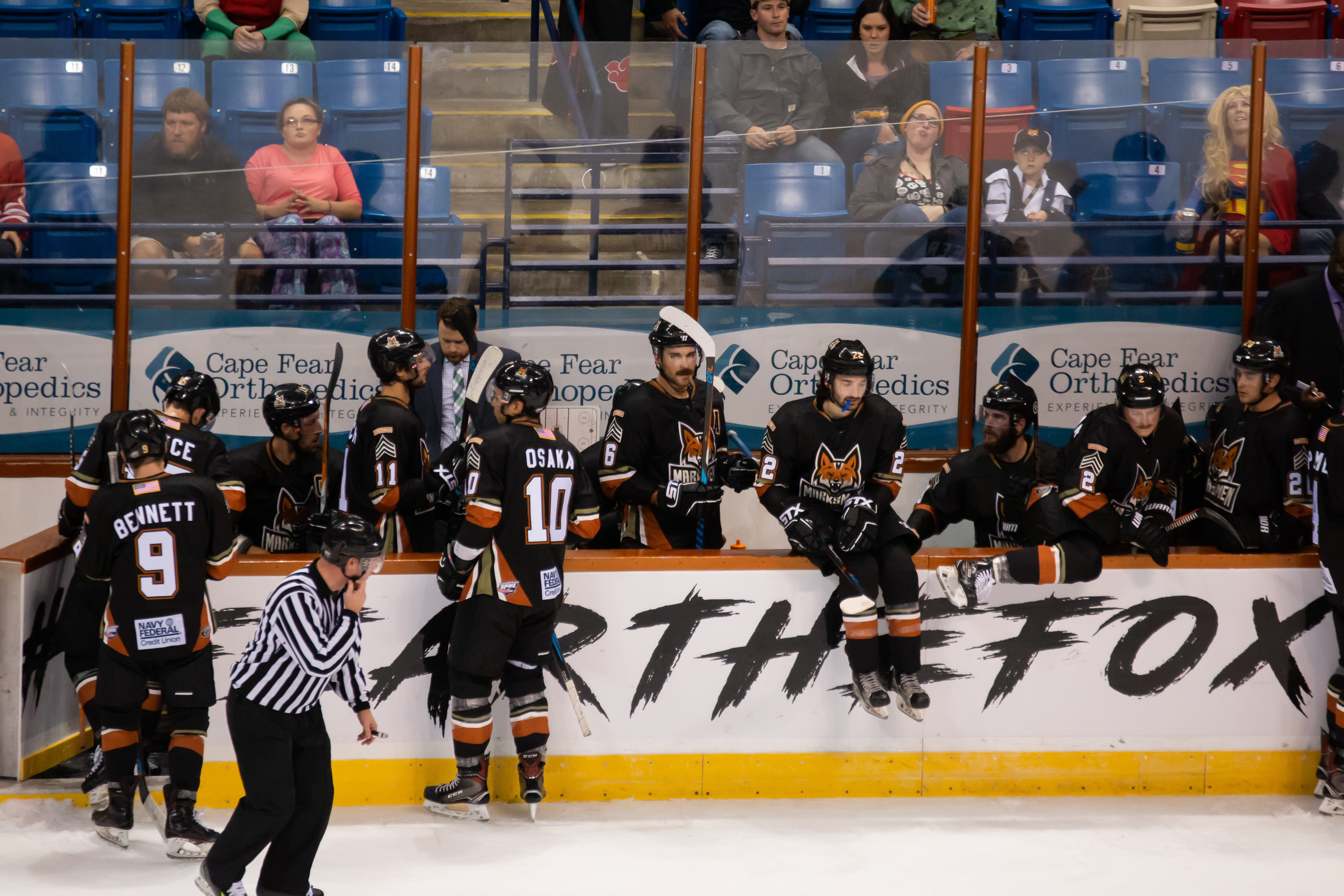 Fayetteville, N.C. – After last weekend’s three game away stint, the Marksmen returned to Fayetteville with three of six possible points. The team enters this weekend’s games against the Ice Bears and Rail Yard Dawgs, with a 3-4-1 record. The final game of the three saw the Marksmen win in overtime 6-5 against the Peoria Rivermen.

The Marksmen have been improving a lot as of late, scoring the first goal of the game against Peoria for the first time in the season. Friday’s game will see a homecoming for Max Cook. Cook had spent the last two seasons with the Marksmen before being called up to the ECHL with the Norfolk Admirals last season, and signing there in the offseason this year. In his time with the Admirals, Cook scored four goals and racked up a 10 assists. Cooks veteran prowess and hockey skill will come at a perfect time for a quickly-developing Marksmen team.

On Nov. 16th at 7 P.M., the Marksmen welcome a physical Knoxville team into the Crown Coliseum for Margaritaville night. The Ice Bears are coming off back-to-back losses to the Macon Mayhem, the top team in the SPHL. The Ice Bears find themselves in a hole, having dropped three of their last four games. Three of the Ice Bears four goals last weekend came while they were on the power-play, which doesn’t bode well for a Marksmen team cold on the PK in their last week.

Defensemen Doug Rose has proved to be a huge factor in the Ice Bears scoring chances, racking up seven assists thus far. Lucas Bombardier is the Ice Bears leading scorer with four goals and five assists.

This is the first meeting of the season between these two historic-rivals.

Both encounters with the Rail Yard Dawgs saw a Marksmen victory. Fayetteville earned a come-from-behind win on Opening Night propelled by Hauswirth and Mazurek, and a decisive 8-5 victory in Roanoke on October 26. McCormick picked up a hat-trick, and Osaka picked up the Marksmen’s first Gordie Howe hat-trick (goal, fight, assist). The Marksmen have the Dawgs number so far and look to continue their winning ways Saturday night.

The Rail Yard Dawgs however, won’t go down easy. In the 8-5 loss to the Marksmen, the Dawgs found themselves trading goals with the Marksmen until the third period.

Coming off back-to-back victories against the Thunderbolts, a team that bested the Marksmen last weekend, Roanoke looks hungry. The veterans, Maxime Guyon (4) and Colin Murray (3) have found their scoring touch of late, and the Dawgs come to Fayetteville looking their best this season.

This weekend in the Crown Coliseum promises to be one full of physicality and rivals coming head to head. For Fayetteville, it means a chance to jump over the .500 mark before Thanksgiving.

You won’t want to miss two great nights of hockey action and family fun at the Crown. On Friday’s Margaritaville, we’ll be offering $5 “Cheeseburgers in Paradise”, alongside Margaritas and beach Beers (Corona, Landshark). Dress in your finest beach apparel, as we’ll be hosting a Hawaiian Shirt contest during the game.

Saturday Night will be a magical one, as it’s Wizardry Night in the Crown! Muggles, half-bloods, and Wizards are all invited out for a celebration of magic and fun. We’ll be serving Butterbeer for the whole family, and hosting a Costume Contest for the best dressed Wizard/Witch. Following the game, we’ll have a post-game skate with the players! Skate rentals are $5, otherwise the night is FREE to skate! Then, join us at Old Chicago as we have our Post-Game Party all night long with players and staff.

If you can’t make it out to the Crown this weekend, both games will be broadcast LIVE on SPHLlive.com ($) and MarksmenRadio.com with the Voice of the Marksmen, Shawn Bednard.

It’s a can’t miss weekend in the All-American City.

Voice of the Marksmen Launches “Goals Against Diabetes”