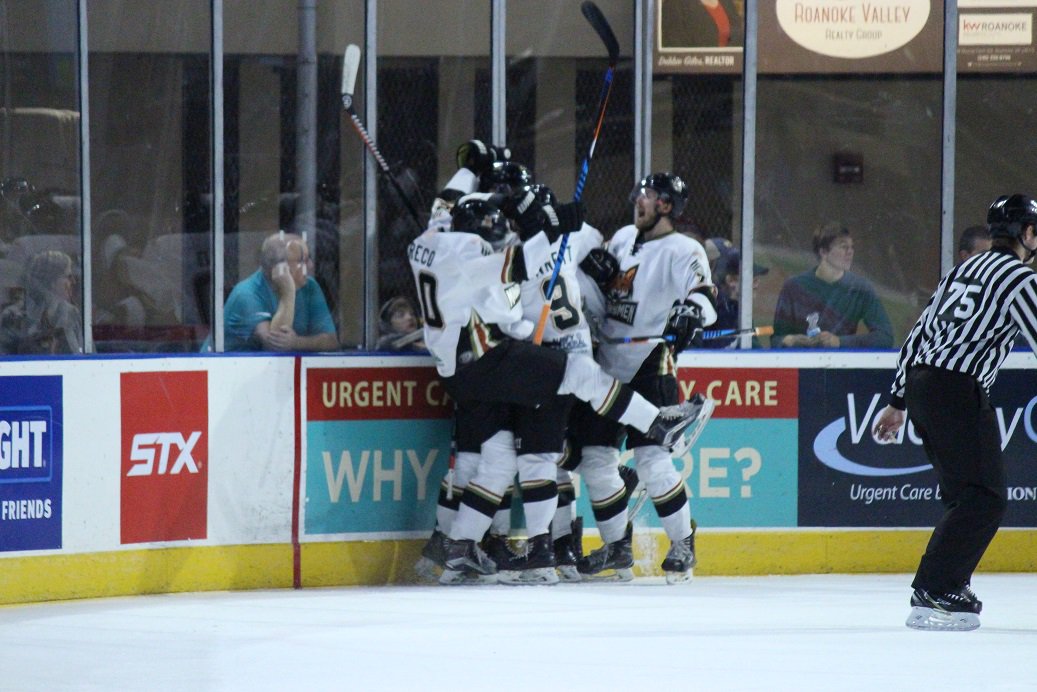 Roanoke, VA – While most around Fayetteville were celebrating Thanksgiving amongst friends and family in their homes, the Marksmen hit the road to the Berglund Center in Roanoke, Virginia to take on their rival Rail Yard Dawgs.

The Marksmen and Rail Yard Dawgs came out the gate swinging, wasting no time attempting shots-on-goal. Dillon Kelley made his first start in net since Evansville, looking to provide the Marksmen with some big time saves. Roanoke put Kelley to the test early, putting three of the first five shots in front of him.

The Marksmen got it together, as Darren McCormick and Shane Bennett attacked the net applying pressure to Dawgs Goaltender Tanner Creel. Nearing the end of the period, Travis Jeke was called on a hooking penalty. Shortly after that call, David Mazurek was called on a cross checking penalty. Those penalties put the Marksmen on a 5-3 penalty kill for almost the remainder of the period. The penalty was killed, and the horn sounded to finish a 0-0 period.

Entering the second period of play, Dillon Kelley had a total of seven saves, working to keep the score at zero. Brian Rowland wasted no time applying pressure to Dillon Kelley, and the efforts would soon pay off. Colin Murray and Jordan Carvalho would score for the Dawgs back-to-back, and before either team knew it, it was 2-0 Roanoke.

Shortly after the goals from Roanoke, Taylor Pryce was sent to the sin bin on a tripping penalty. Captain Jake Hauswirth was handed a beautiful pass from Tim Kielich, and the Captain would notch his second of the season to get Fayetteville on the board. Roanoke’s Alex Adams was handed an unsportsmanlike conduct penalty, putting the Marksmen on the power play at the conclusion of the second. Period 2 would end 2-1 in favor of the home team.

Alex Adams penalty would start the third period with the Marksmen on the power play. Fayetteville had an impressive start to their third period, attacking the net and not giving Tanner Creel any time to rest. Roanoke’s Patrick Harrison was handed a holding penalty, putting the Marksmen back on the power play. The Dawgs killed off their penalty, but that didn’t last long as they returned back to penalty kill. Unfortunately, the Marksmen power play was short lived as Shane Bennett was sent to the box. Team’s were being gracious in handing the other men in the box.

Not too long later, David Mazurek delivered his season’s greetings, sneaking one past Tanner Creel and knotting the score at 2-2. The Marksmen started clicking in high-time, as Cody Brown would find one loose after a number of saves from Creel, and bang it home to give Fayetteville their first lead. Michael Economos and Nolan Sheeran fought like they were fighting for the last drumstick at the table, as the two teams looked to finish with strong momentum. Desperate, the Dawgs pulled Creel, and Mazurek would have no problem finishing off his night with the final butter on the biscuit, the empty netter.

Fayetteville once again asserts themselves as the Comeback Kit against Roanoke, with a 3-1 season record. This is the third come-from-behind victory for Fayetteville over the Dawgs, this time in a 2-0 hole.

Dillon Kelley had an impressive night, stopping 20 shots-on-goal and bouncing himself back into the win column as well. Behind Mazurek and Brown, the Marksmen improve to 5-5-1 on the season, and have now leaped defending-Champs Huntsville for fourth place in the SPHL standings.

The Marksmen rode to Knoxville with a win and a dinner in their systems late last night, and now look to start a home-and-home with the Ice Bears. Last time these two teams met up was a week ago today, where Fayetteville came up with an exciting OTW thanks to Tim Kielich’s first of the year. Knoxville is far from an easy place to play, but the Marksmen will look to keep up their hot start on Thanksgiving Weekend, and come home looking to pull out the brooms.

Once your Black Friday shopping is finished, head over to On-After Sports Bar and Grub tonight to join Marksmen Staff and Fans for our official “Home Away From Home” Watch Party! Don’t forget; buy a $10 Marksmen Pint Glass today, and receive $1.50 Bud and Bud Light Drafts tonight and during every away game.

The Marksmen are back home TOMORROW, Saturday, November 24 for Rednecks, Racing, and Wrestling Night. Tickets are available now by calling the Marksmen office at (910) 321-0123 or clicking on the date above!