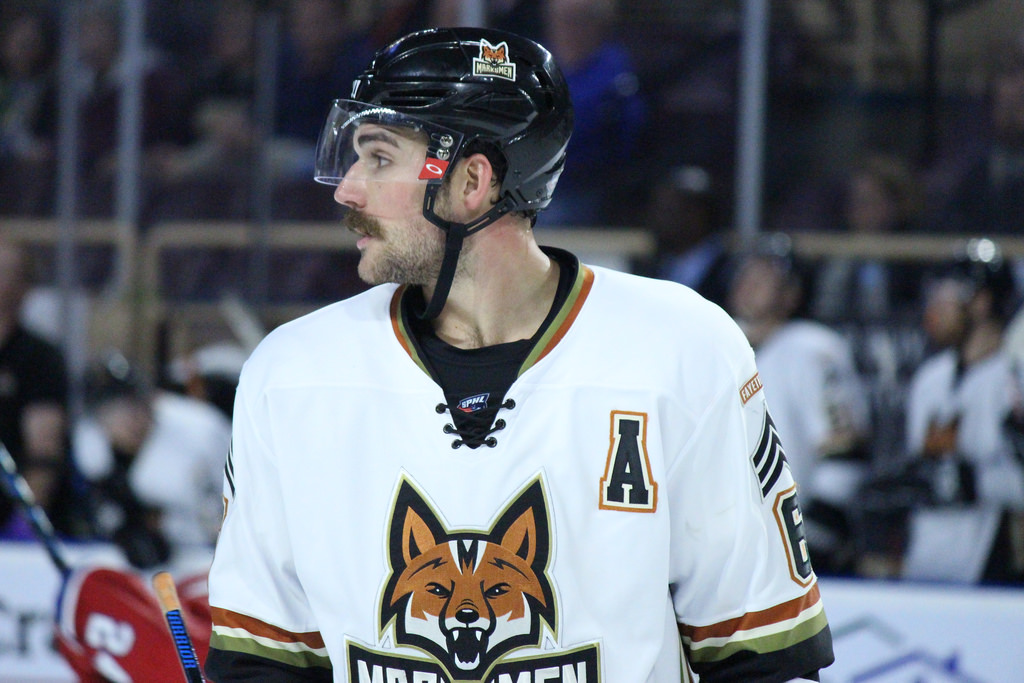 Knoxville, TN – Feeling confident but focused after the previous night’s come-from-behind victory, the Marksmen invaded the Knoxville Civic Auditorium looking for another tally in the win column. Dillon Kelley was named starter after a solid twenty save night. Kelley wasn’t in the net last time the Marksmen faced the Ice Bears, making him an unknown obstacle for the Ice Bears offense.

Knoxville opened the night with the first shot-on-goal but that soon changed. The Marksmen were rolling early on, racking up six of the first ten shots-on-goal. The first period was scoreless for the majority, until Travis Jeke ripped one from near the blue line. Jeke’s one timer snuck past Michael Santaguida for his third of the season. After Jeke’s goal, Santaguida headed to the locker room early and Mason Pulde entered for the final three minutes. Fayetteville would take their 1-0 lead to the locker room.

Michael Santaguida returned to the crease for the Ice Bears, looking to stop a red hot Marksmen offense. The Marksmen started the second period much like the first: aggressive.

Kyle Thacker was sent to the sin bin for a tripping call, putting the Marksmen on the penalty kill for the first time on the night halfway through the game.

The Ice Bears capitalized on their first power play of the game, Eric Ylitalo found the twine bringing the Ice Bears within one. The Marksmen went right back on the attack however, owning five of the last six shots-on-goal following Ylitalo’s goal. As the second period concluded, Dillon Kelley was on track for another solid performance. Kelley had nineteen saves going into the third period, as Fayetteville 3-2.

The third period began and the Marksmen looked to seal the deal with another solid period of play. After what was a rather lackluster first ten minutes, Eric Ylitalo managed to get one by Dillon Kelley again for his second of the night. Ylitalo’s goal also tied the game up 3-3.

After Knoxville’s goal, Danny Cesarz and Max Cook got into an altercation resulting in the two going to the box for roughing calls. Travis Jeke was then called for a hooking, putting the Marksmen on a 4-on-3 penalty kill.

Marcus Ortiz came up big for the Ice Bears when it counted, scoring the third unanswered goal for the Ice Bears. Ortiz’s goal gave the Ice Bears the lead late in the third period, 4-3. The Marksmen found their second wind, and tied the game on a shot from Tim Kielich with less than four minutes remaining.

After an impressive recovery, the Marksmen rallied back and forced overtime for the second time this season against Knoxville. Despite the Marksmen’s valiant effort in the early stages, Charlie Granath and the Ice Bears put it away in overtime. With a loose puck in front of the net, Granath capitalized and gave the Ice Bears a 5-4 overtime victory.

Fayetteville drops to 5-5-2, while Knoxville improved to 5-4-2, jumping the Marksmen in the standings for fourth place.

The Ice Bears travel to Fayetteville tonight for our Rednecks, Racing and Wrestling night. Join us at the Crown Coliseum tomorrow at 6:00PM for a game that promises to be a memorable one. With Power Wheel Races, a Joe Dirt/Racecar Driver/Wrestling costume contest, and your chance to win WWE Live! or TRAXXAS Monster Truck Tour tickets, you WON’T want to miss it.

If you can’t make it out to the game tonight, the game will be broadcast as always on SPHLlive.com ($), or you can listen live for free with the “Voice of the Marksmen” Shawn Bednard, as he brings you the call.

The Marksmen are back home TONIGHT, Saturday, November 24 for Rednecks, Racing, and Wrestling Night. Tickets are available now by calling the Marksmen office at (910) 321-0123 or clicking on the date above!

Marksmen Comeback For Seconds, Down Roanoke 4-2 on Thanksgiving