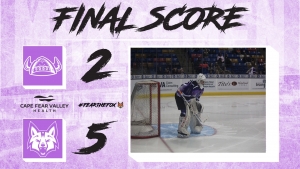 On a special Hockey Fights Cancer weekend, the Marksmen roared out of the gate with Carlos Fornaris scoring his third goal of the year just 54 seconds into the game.

Fayetteville continued the offensive onslaught with Wyatt Noskey potting a feed from Matt McNair to mark his second goal in as many games. And less than a minute later, Don Olivieri blew his second goal of the year by Mayhem starter Dillon Kelley to make it 3-0.

After another offensive explosion, the Marksmen have scored three goals in the first period in each of their last five games, marking 21 first period goals this season.

Chase DiBari capitalized on an odd-man rush 13:24 into the first period to stop the bleeding and make it 3-1.

After a back-and-forth second period, Taylor McCloy deflect a shot from Alexis Girard to extend the lead back to three. Bryan Moore would also get his first SPHL point, an assist on the play.

Scott Coash cashed in on a partial breakway from the near wing in the third period, but that would be all the offense Macon could muster.

Moore added an insurance empty-netter with just six seconds to go in the game to cap off the win.

The Marksmen and the Mayhem will square off again tomorrow at 6:00 p.m. from the Crown Coliseum. It’s Pirates and Princesses Night and the end of the Hockey Fights Cancer Weekend presented by Tiago Title. There are all sorts of things going on around the arena including a post-game jersey auction, a post-game skate, and the chance to meet pirates and princesses on the concourse. Limited tickets still remain at marksmenhockey.com.