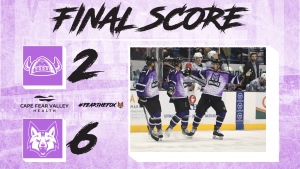 FAYETTEVILLE, N.C.- The Fayetteville Marksmen, proud members of the Southern Professional Hockey League, took down the Macon Mayhem 6-2 at the Crown Coliseum on Saturday night.

The Marksmen took the game’s first penalty, but that didn’t stop them from scoring first as Don Olivieri slid a puck by Mayhem start Michael Stiliadis to make it 1-0.

However, just 43 seconds later, Scott Coash buried a feed from Cody Rodgers to draw Macon even at 1-1.

Carlos Fornaris and Bryan Moore would each score for the Marksmen in the first period, to mark the sixth straight game that Fayetteville has scored three or more goals in the first 20 minutes.

At the end of the first, Caleb Cameron was denied on a breakaway by Marksmen goalie Jason Pawloski, but Devin Brink potted his first of the season on the rebound.

The second period saw Fayetteville take over the game with Bryan Moore scoring his second of the night, Bryce Ferrell notching a powerplay goal on a breakaway, and Matt McNair using an opponent to bank a shot in.

The barrage of second period offense chased Stiliadis after just 33:10 of work and Dillon Kellley would be called in to relief.

While the Marksmen did not score in the third, things got physical and testy down the stretch.

Fayetteville’s victory marks the fifth time this season that they have defeated the Mayhem, and the two clubs will be eight more times this year.

The Marksmen next face the Roanoke Rail Yard Dawgs on Wednesday night at home and will wear their blackout uniforms for the first time since the design was released. Limited tickets are still available at marksmenhockey.com