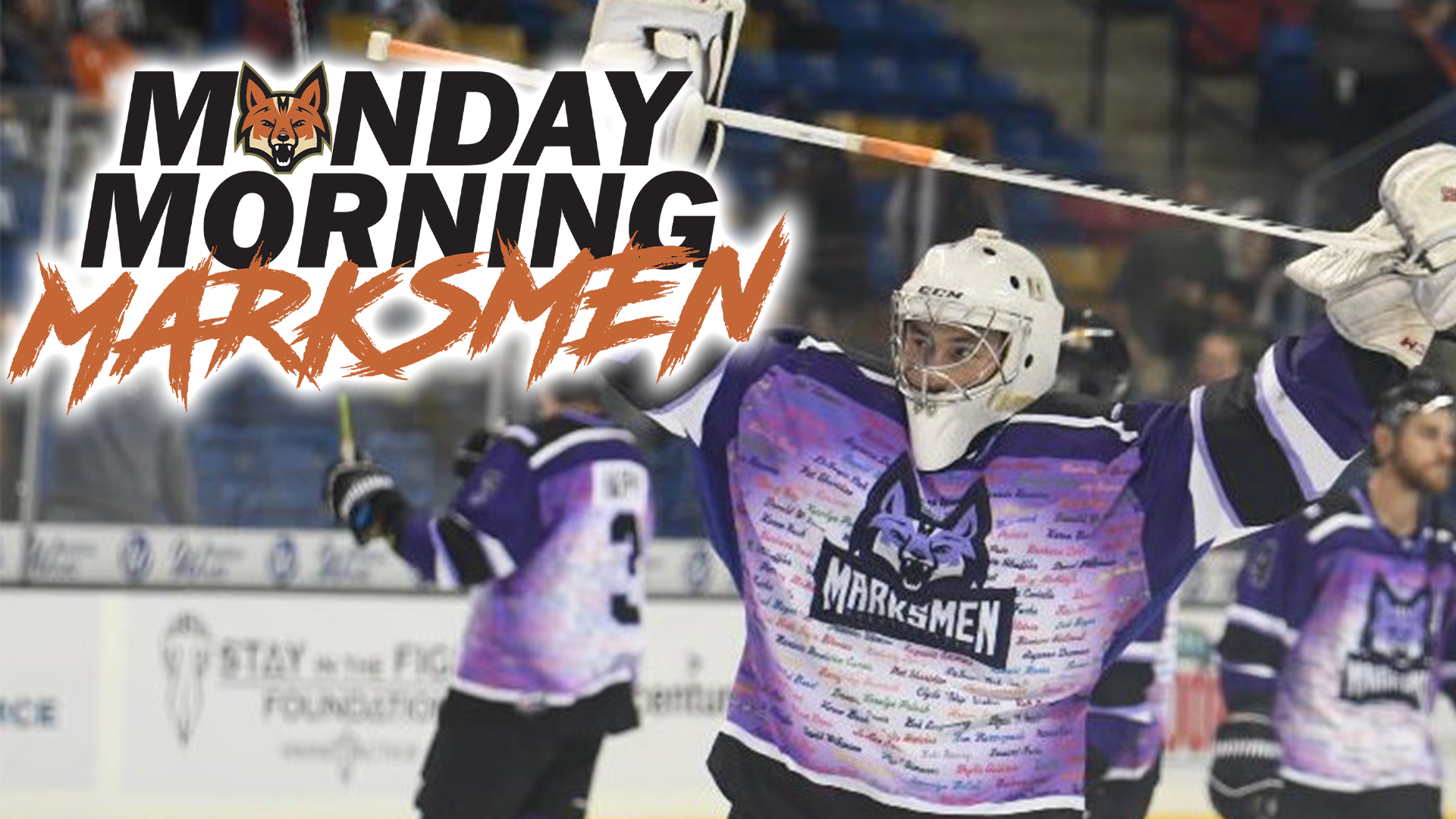 As the Fayetteville Marksmen celebrated Hockey Fights Cancer Weekend, and helped renew the game’s commitment to battling this terrible disease, that was the recurring thought.

Every name on the custom jersey had a story.

But there was one story that stood out. One Marksmen player (and I won’t say who because it’s still a new and evolving situation), found out just this week that his dad was diagnosed this week. And what’s more inspiring is that this player was willing to share the story just days after the news. No matter how many punches were thrown this weekend, no matter how many open-ice hits, that’s strength.

There aren’t always meaningful games in the standings in November, but these games—they mattered.

Something that didn’t matter is that Friday’s game started a little late. Bus troubles for the visiting team may be the most unfortunate of recurring circumstances in minor league hockey—and you haven’t seen fast until you’ve watched a goalie stretch, dress, and take warm up in about 20 minutes.

You roll with the punches, it’s just how things are in the minors.

And really, through the whole weekend, it was the Marksmen throwing the punches, wasn’t it? The Marksmen have now scored three or more goals in the first period of each of their last six games. Those are video game starts, and once they had the lead they never gave it up. When’s the last time you’ve heard of a team scoring three or more goals in a period in six straight games?

Adding Bryan Moore, a guy with 55 AHL games under his belt, certainly helped clear the way for some production, but there was more at play than just top-line scoring.

Wyatt Noskey scored on Friday night, his second goal in as many games at that point. Then on Saturday, Bryce Ferrell scored with his family in attendance on the weekend.

While the McCloy’s, Olivieri’s, and Moore’s of the SPHL will always get their kicks on the scoresheet seemingly, seeing the young guns of this group producing has been a joy.

Unlike other teams, the younger guys in the locker room have not faded into the stat line, but they have instead made themselves a story.

And there’s the buzzword for this week’s blog again—stories.

The last thing to mention for this week came from Friday’s game. After a Marksmen win, 5-2, fans were invited down to the ice to paint the name of a loved one or an inspirational message on the playing surface and those would be frozen into the ice to be played on Saturday.

There was an older lady with her son in the north endzone left faceoff circle, and even at a more experience age with those around her, she painted the name of her dad with such strength and composure, you would have thought her to be spry and in her 20s again.

At center ice, a young girl with a brush went to doodling away on her message. Little did anyone know, no matter what the words said—she was battling with cancer herself.

And in the south end, most of the front office staff scribbled their own loved one’s names—granddads, mothers, grandmothers, and friends.

Remember this past weekend. Cherish it. For so many of those names in the ice, there are no more hugs to give and no more “I love yous” to say.

But we’ll always have the stories—and each one is worth telling.