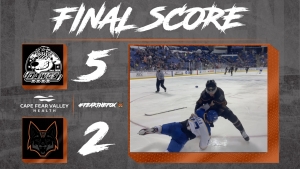 The game started tremendously for the Marksmen with Taylor Best striking twice in the first period. First, he scored on a partial breakaway from the nearside wing, and then added another with 17 seconds to go in the first by sweeping in a rebound on a net-front scramble.

In the second period, the tide shifted. Roanoke used a shorthanded goal from Matt O’Dea to kickoff a scoring spree. Just 1:09 later, Mac Jansen would tee up a slapshot and beat starter Jason Pawloski to tie the game 2-2.

Jansen would give the Rail Yard Dawgs a lead they would not relinquish on a powerplay goal 15:41 into the middle frame of play.

Down 3-2, the Marksmen were unable to cover C.J. Stubbs with just 14 seconds remaining in the second period, and he beat Pawloski between the legs to extend the Dawgs’ lead to two.

Stefano Durante would come in to relieve Pawloski after the second period.

Despite some good chances in the third period, former-Marksmen-turned-Rail-Yard-Dawg Brody Claeys shut the door. Claeys ended the game with 16 saves on 18 shots.

Jansen completed a hat trick on his second powerplay goal 19:01 into the third period.

While Roanoke ended the game 2-for-3 on the man-advantage, the Marksmen were a paltry 1-for-7 on the St. Peter Pest Control powerplay.

These two teams will square off for the fourth time this season on Friday night in Roanoke at the Berglund Center at 7:00 p.m.

Fayetteville returns home on Friday, December 3, against Roanoke. It will be Top Gun Night at the Crown Coliseum and tickets still remain at marksmenhockey.com.