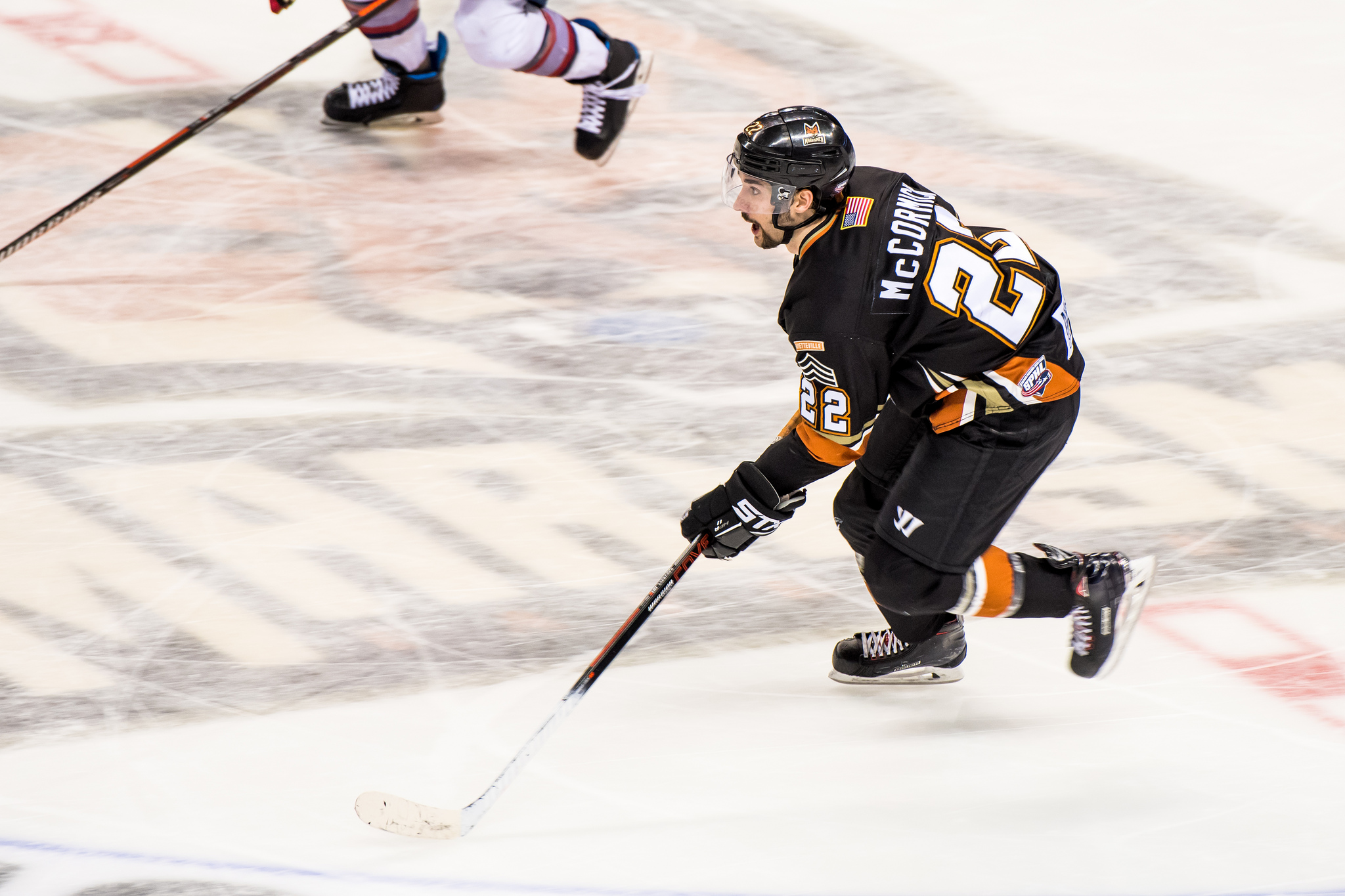 FAYETTEVILLE, N.C. – A Marksmen win followed by a day off leads us to Saturday night against Pensacola. The force looked to be strong with the Marksmen as it was Star Wars Night inside the Crown with over 3200 fans buzzing like lightsabers. The teams weren’t starting off the game at lightspeed as the contest started off slowly.

The opening 15 minutes of the game failed to muster much offense, as only minimal shots were recorded. With 4:20 left in the opening period, Pensacola started out the scoring, as Ryan Marcuz found the back of the net, giving the Ice Flyers the 1-0 lead. Fayetteville failed to record another shot in the first period following the Pensacola goal.

The Marksmen needed a spark coming out of the dressing room, and they got it. Directly off the face off, Fayetteville  found the puck back on Cody Brown’s stick, he forced the issue up the ice, and slid a perfect feed to Darren McCorick to the back of the net. The Marksmen looked to build off their early period momentum, just :20 in, trying to take the lead.

Neither team was able to get anything going in the period after the quick start. The teams traded shots, but couldn’t score. The second dragged on with just a pair of penalties being the major events. The Marksmen failed to score on three power plays during the game. The game was tied at one going into the dressing room following the second period.

The third period played very similar to its predecessors. Following early penalties for both squads, neither team could get momentum going. Very low shot numbers in the third period for both teams, Fayetteville with nine and Pensacola with only six. Fayetteville outshot the Ice Flyers 5-1 in the final 10 minutes, and looked to ride off the momentum given by the crowd. The low scoring, low offense periods lead to the fourth extra period in the last five games.

The extra period stayed with the same narrative as the previous three periods. Only three combined shots in the entire extra five minutes and no goals. Pensacola finished the game with only 33 shots in 65 minutes of hockey. Fayetteville fared worse, as they shot the puck only 27 times in 65 minutes. The deadlock tie sent the game into a shootout, the second in a week for Fayetteville.

Unsurprisingly, it took a few rounds for anything to happen in the shootout. After four empty rounds, Pensacola finally got it going in round five. Following a Brian Bowen miss, Pensacola Captain Josh Cousineau found the back of the net, ending the game. The goal gave Pensacola their fourth win in the last five against the Marksmen.

The loss prevents the Marksmen from winning their first shootout of the season. The shootout loss drops the Marksmen record to 20-14-8. The point gives Fayetteville 48 on the season – seven straight games with at least a point – and only one win out of fourth place Macon/Knoxville with a game-in-hand. Pensacola is sitting pretty in eighth with the win, eight points ahead of Quad City, who won last night over Evansville. Fayetteville looks to win the series in the deciding match Sunday.