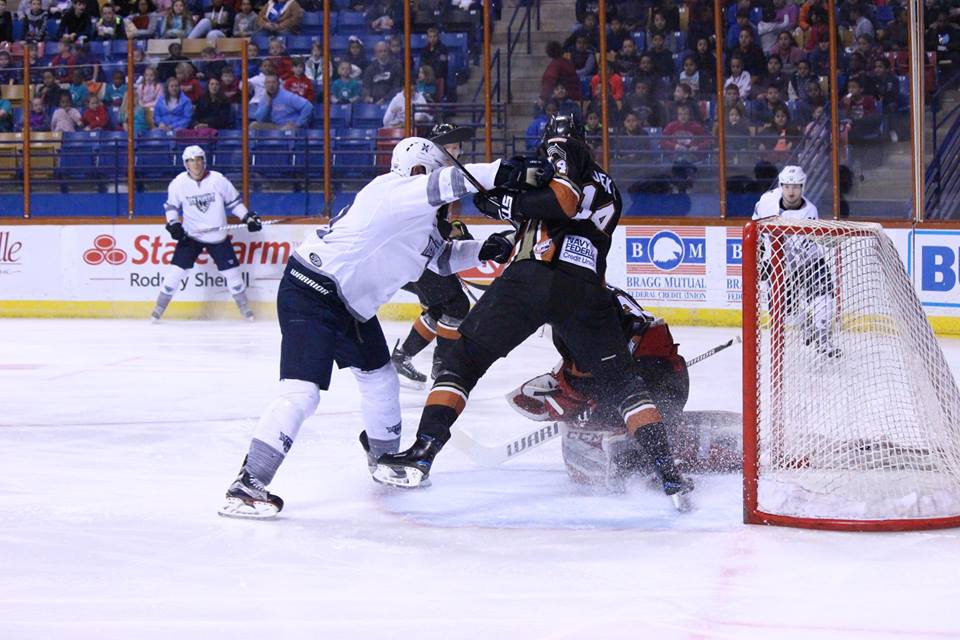 FAYETTEVILLE, N.C. – A disappointing shootout loss on Saturday leads to a Sunday matinee rubber match, and the Marksmen looking for a series win. This game was a polar opposite of last night’s slow, methodical game. The scoring started out quick as the Ice Flyers found the back of the net just over five minutes into the contest.

The Marksmen needed to not drop another game to these Ice Flyers, knowing the game could get out of hand quickly here. They needed to do something to get the squad going, and they needed it fast. The next offense did not come at the hands of the Marksmen, Pensacola found the net yet again to extend their lead to two.

Fans barely had time to recover from that goal as a swift 17 seconds later, Pensacola struck again. Pensacola’s Tim Moore; scoring both goals, giving the Ice Flyers a three goal lead. The period and game was still young, as the Marksmen still had time and a will to come back and make this a game.

Fayetteville benched their starting goaltender in Nathan Perry after the dismal start. The Marksmen skated out Dillon Kelley to tend the net for the remainder of the game. Fayetteville’s power play got off to a hot start as on their first power play of the game Darren McCormick found the net only 33 seconds into the advantage. The goal shortened Pensacola’s lead to just a pair of goals.

Fayetteville thought that a two goal deficit in the locker room was too much, they wanted to fix it. Max Cook sent a puck into the net with only 15 ticks remaining on the clock, his goal shortening the deficit once again. The Marksmen walked into the locker room still down by a score, but with all the momentum on their side.

One of those shots was much more important than the others as it found the net, giving Pensacola a 4-2 lead going into the dressing room for the second time. Fayetteville was used to playing from behind, and was needing to do so once again. The Marksmen attack came out strong, headlined by a Taylor Pryce goal in the first four minutes of the period.

With 16 minutes still remaining and only one goal separating the teams, Fayetteville looked to tie it up. The Marksmen had it all going for them, they even doubled Pensacola’s shot total for the period. The power play unit got another shot to duplicate their early success, but failed. They pulled the goalie in favor of an extra skater with time winding down, but it didn’t breed any success.

The Marksmen fell 4-3 on Sunday at the hands of Pensacola. The loss; Fayetteville’s fifth in the last six games comes in regulation, meaning no points will be awarded. The loss ends Fayetteville’s six game points streak, dating back to February 8th at Knoxville. The loss comes at an especially bad time for the Marksmen, as a win would have catapulted them into fourth place. They now sit at sixth, one point behind Knoxville and Macon tied for fourth.

The Marksmen now travel to Macon, a team they unfamiliar with. Points are at a must, but especially against teams above Fayetteville in the standings. The short road trip leads to a six-game home stand, marking the final homestand of the regular season.