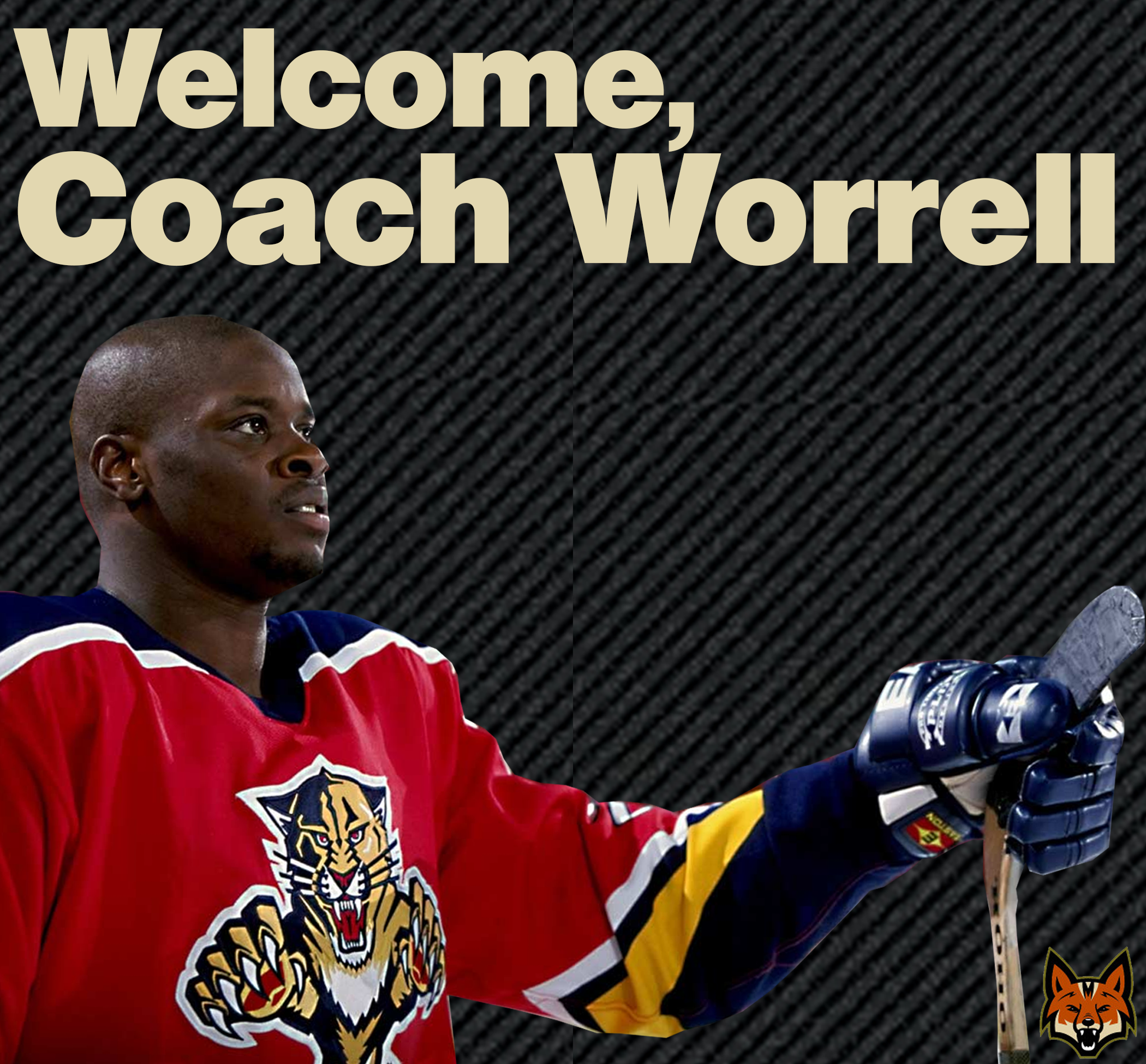 FAYETTEVILLE, N.C. – The Southern Professional Hockey League off-season has been one of building a reputation of legitimacy and setting a precedent for what to expect of the Fayetteville Marksmen hockey club.

After the hire of first-year Head Coach Jesse Kallechy, a three-year assistant in the SPHL and former player, the vision of on-ice success began to form.

That vision has lead to now one of the SPHL’s most notable coaching hires in league history, as Kallechy has found his assistant – legendary National Hockey League enforcer, Peter Worrell.

Worrell – a native of Pierrefonds, Quebec, CA and of Caribbean-Canadian descent – spent seven years in the NHL as a fierce enforcer for the Florida Panthers and Colorado Avalanche, standing at 6’7″. Racking up 1,554 penalty minutes in 391 games (4PIM/game), Worrell knew the grit and fight that it took to last in the NHL.

After retiring officially from his playing career in 2006 with the (then) ECHL Charlotte Checkers, Worrell stepped away from the game for some time. In 2010, he returned to the sport, joining the American Collegiate Hockey Association Division III’s Florida Atlantic University as the Head Coach, and later taking on the same role with North Broward Preparatory School.

With FAU, Worrell took over a team that had little success in team history, and nothing to build off of. In his last season with the team, the Owls did something not previously accomplished in the past years – a Regional berth as a #10 seed. His team advanced all the way to the Regional finals, before falling in double-overtime to the University of Central Florida Knights, 2-1.

He retained these positions, up until joining the Marksmen this off-season.

With hundreds of applicants for the Assistant Coaching position, the journey back into professional hockey would not be an easy one. For Head Coach Jesse Kallechy though, Worrell impressed from the start.

“I’m extremely happy to have Peter join the Marksmen staff”, said Kallechy “He blew me away in the interview process. He was an excellent communicator, our views on player personnel aligned, and he is eager to learn and bring fresh viewpoints to the team.”

For Worrell, although the decision to move on from what had been home for eight years was difficult, it was one that he felt, and soon became realized, as the right one.

“When I ended my seasons last year, I made the decision I wanted to explore new challenges. I contacted a lot of teams, in many leagues. When I first contacted the Marksmen and talked to Coach Kallechy, it just felt right,” said Worrell “It was a big decision for me, as I was comfortable in my previous positions, but everyone in Fayetteville has been so welcoming and first class, I know that I couldn’t have found a better situation.”

The transition from being a student of the game, to a teacher was one that Worrell has been able to develop and hone thanks to his last eight years coaching, especially understanding his responsibility working with impressionable students of the game.

“Making the jump to professional hockey is something that though daunting, has been a long time coming. I believe being in charge of the programs in Florida gave me a greater appreciation of everything that it takes to be successful on and off the ice,” said Worrell “With both FAU and NBPS, it was my responsibility not only to give my players a plan to win, but to guide them in all aspects of the game and life.”

That’s not to say though, Worrell didn’t have great teachers along the way, spanning back to his time suiting up as a professional hockey player.

“I was one of the luckiest players in the world, in that I was able to work for and play with some of the greatest talents and teachers of this game. I was also smart enough to soak it all in. From Charlie Henry, Bryan Murray to Glen Sather and everyone in between, I was blessed with great mentors,” said Worrell “Pavel Bure, Scott Mellanby, Joe Sakic, Peter Forsberg, and the hundreds more show me how to play the game and be a pro. I believe it is my responsibility to pass these lessons on, and help this group to be the best they can be.”

Marksmen owner Chuck Norris spoke incredibly highly of Worrell’s background, and the impact his hire will mean for the team and league.

“I’m really excited about who he is, where he’s been, and what he brings to our organization. He gives the Marksmen not only an asset having played in the highest level in the world, but his experiences will help our younger developing players get insight about what it takes to play at the higher levels. They will learn about work ethic, discipline, and every attribute it takes to play at the highest level,” said Norris

“For our league, it gives even more credence to what I’ve been saying since I’ve been involved with the league – that the SPHL is a very skilled and respectable league. Peter gives us a lot of credibility.”

These sentiments were met by Coach Kallechy.

“Bringing someone on staff who was able to play at the highest level of hockey is very exciting,” said Kallechy “Our players will be able to draw on his insight and experiences to elevate their game.”

Coach Worrell’s hiring has another major impact for the SPHL and the Marksmen outside of his outstanding credibility as a player and coach that shouldn’t be left unsaid.

With a community as diverse as Fayetteville, Worrell will work as a leader of under-representation in hockey, and continue the league’s forward-thinking of inclusiveness in the sport. Coach Worrell becomes the second Black coach in the league’s history, following Macon’s Leo Thomas’ promotion to Head Coach this off-season.

“After the signing of Leo in Macon, the signing of Peter lets people watching our league from the outside know that we are a very diverse and inclusive league. If you love our game, then we want you to be a part of it,” said Norris “It doesn’t matter what color you are, where you’re from, or what religion you are – if you love hockey, we want you to be a part of what we are doing in Fayetteville, and in all the other cities that the SPHL is in.”

Coach Worrell has one main testament he wants his players to take away from their time from the first training camp to the last whistle of the season.

“I hope to give these young men the belief in themselves, their teammates, and the program and community, to give their best every day and leave it all on the line. Play free. Play fast. Be a hard team to play against. I want the guys to believe that every day they’re a Marksmen is a blessing, and play that way.”

We at the Fayetteville Marksmen organization are proud and honored to bring aboard Assistant Coach Peter Worrell, and know that his impact will be felt immediately. We also look forward to him being the bedrock of what promises to be an exciting season of hockey in Cape Fear.

On Wednesday, July 11 at 7:00 P.M., the Marksmen organization will be officially welcoming Head Coach Jesse Kallechy to Fayetteville, and we want to see you at Old Chicago in Fayetteville for a public meet-and-greet. The Marksmen front office will be in attendance to meet with fans as well, and Season Ticket Holders receive 10 percent off their bill as a token of appreciation.

We hope to see you in attendance and get to know you before the season is under way!

LOCK IN YOUR SEAT:

The 2018-19 Marksmen Home Opener is October 19th, and Season Tickets are on sale now. With over a handful of benefits, and a value over box office prices, Season Tickets make for the ultimate gift for the Marksmen in your life.

If you’re interested in hearing about our season ticket packages, their benefits, or group packages, and mini-plans, email Director of Media Relations Shawn Bednard, SBednard@MarksmenHockey.com.