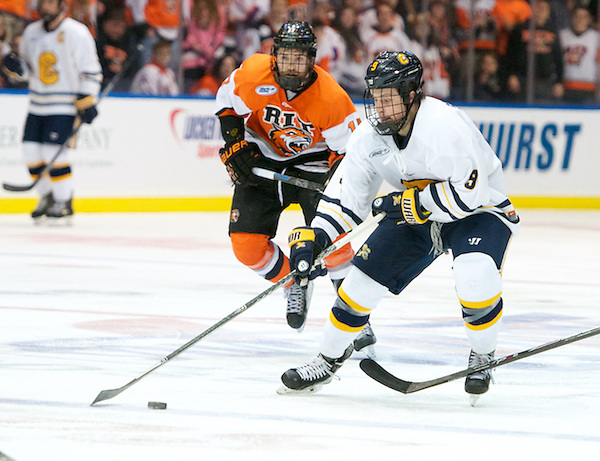 FAYETTEVILLE, N.C. – With two veterans and a rookie player announced to start our roster, we are excited to even that demographic up by welcoming aboard four-year NCAA Division 1 alum, Nolan Sheeran.

Sheeran, a 24-year-old forward from East Amherst, New York, gets his first shot in professional hockey with the Fayetteville Marksmen.
The Ontario Junior Hockey League’s Buffalo Jr. Sabres took a well-performing young player and developed Sheeran into a junior star, finding his way to 102 points in 116 games played in the touted league.
The OJHL graduate transitioned to the college game, and four years later turned into Canisius College hockey alumni.
Sheeran joins the Marksmen after an NCAA career of 24 points in 120 games played. In his college career with the Golden Griffins in the Atlantic Hockey Association, Canisius claimed a regular season conference title in the 2016-17 season.
Playing at such a high-level in his junior and college hockey career, the prospect of joining the premier “A” hockey league in the SPHL, and with an up-and-coming Marksmen team was exactly what he wanted.

“It’s an honor to have signed my first pro contract with the Marksmen. I’m thrilled to be moving forward with my career with such a high class organization,” said Sheeran “Talking to Coach Kallechy has been great, and it’s clear to see that we share a similar passion and outlook on the game.

The Marksmen are headed in the right direction, and I am excited to get involved both on and off the ice with the city of Fayetteville.”

Head Coach Jesse Kallechy saw the high-level of play that Sheeran was groomed under in the OJHL and NCAA, and enjoys his potential.

“Nolan is a player who will bring a lot of skill and effort to our lineup,” said Kallechy “He is a player who played Division 1 college hockey for four years, and we are eager to get him here and see how he develops as a pro.”

Professional hockey is in Sheeran’s blood, as his cousins Brendan and Reilly Smith are both NHL players.

The Fayetteville Marksmen are excited to welcome home Nolan Sheeran for the 2018-19 season, and look forward to him being the bedrock of what promises to be an exciting season of hockey in Cape Fear. The 2018-19 Marksmen Home Opener is October 19th against Roanoke, and Season Tickets are on sale now.