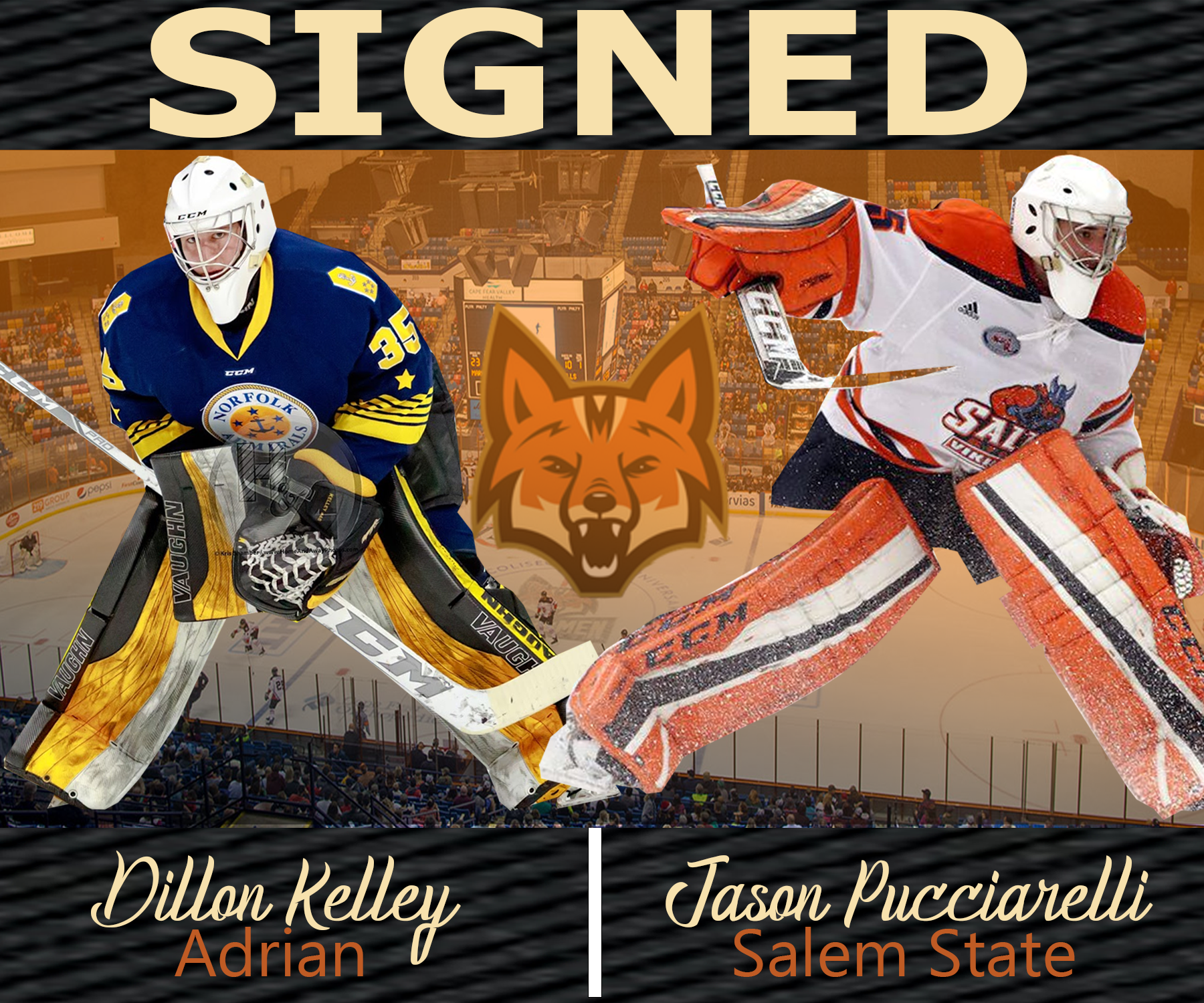 FAYETTEVILLE, N.C. – First-year Marksmen Head Coach Jesse Kallechy is a former-SPHL goaltender, so the anticipation for the organization to announce their goaltending core for the season was high.

The former goalie didn’t disappoint, as he enlisted a strong pair of rookies to back his defense.

Kelley’s career started in Reading, PA as he suited up for the Norfolk Admirals against the Reading Royals, while Pucciarelli served as a dressed backup goaltender for the Wheeling Nailers for a two-game series against the Worcester Railers.

Now, nearly half a year after their pro debuts and end of their college seasons, these two young stud goaltenders find themselves in a position where their talents will be tested immediately.

Kelley didn’t start tending the net until his freshman year of high school, a self-described late bloomer of the position at 14 years old. At 6’4″, 226 pounds, his stature certainly allowed for a quick transition, from a year of House Hockey that lead to HS Hockey, and eventually a spending time around the NA3HL and NAHL with a game in the USHL before finding his way to Adrian College. At Adrian, Kelley earned a 16-2 record in 24 games played, with a 1.71 Goals Against Average and .924 Save Percentage. Senior year was an outstanding one for Kelley, as he amassed a 7-1 record with a .949 SV% and 1.2 GAA.

“October can’t come soon enough. After talking with Coach Kallechy, I’m very excited to get the season going, and build a new culture for the incredible community of Fayetteville,” said Kelley “I think we will make a lot of noise this year.”

Coach Kallechy noted the developmental potential that Kelley has shown during his young goaltending career, and the excitement that comes with it.

“Dillon is a guy who’s passion for the game and his position is extremely contagious. He is a late bloomer to the position, however, he is a guy who has got stronger each year he has played,” said Kallechy “He has a pro-sized frame, and he is really athletic for a man his size. I think he will continue to get better and better the more game he is able to play.”

Pucciarelli is a good Ontario boy, with a long-line of high-level experience under his belt. Standing at 6″1, 185 pounds, Pucciarelli spent five years in the OJHL with 148 games played, with a 65-50 record, a 3.02 GAA and a .904 SV%. A four-year starter at Salem State, Pucciarelli finished his senior season as a Massachusetts State Collegiate Athletic Conference First-Team All-Conference Goaltender, with a 10-12-4 record, 2.93 GAA, and .921 SV%. Puccirelli spent his last two seasons as a Viking playing every single game, and a save percentage above 91 percent.

“I am very excited to sign my first pro contract with the Marksmen. After speaking with Coach Kallechy, it’s clear the Marksmen are headed in the right direction,” said Pucciarelli “I am looking forward to being involved in the community, as well as bringing a championship back to Fayetteville.”

Coach Kallechy spoke highly of the talent and still-to-show potential that Pucciarelli has, especially with his high number of games played.

“Jason was a goaltender who came to us highly recommended by a number of people. We really liked the fact that he was able to play a lot of games throughout his college career, and be a calming presence for his team,” said Kallechy “He is a guy who competes hard every single day and will battle in practice to make his teammates better.”

Kelley spoke positively and excitedly of the opportunity for having two rookies come in at the same time.

“I was really excited when Coach Kallechy said he wanted to create a Vegas Golden Knights type-team. I look forward to meeting my goalie partner.”

For Coach Kallechy, it was about finding the right fit, on and off the ice, in his goaltenders.

“We are very pleased to add not only two quality goaltenders, but two quality people to our training camp roster,” said Kallechy “Peter and I are very excited to see both these guys get to camp in October and compete for a spot on our roster with all our other young talent.”

The Fayetteville Marksmen are excited to welcome home Dillon Kelley and Jason Pucciarelli for the 2018-19 season, and look forward to them being the bedrock and backstop of what promises to be an exciting season of hockey in Cape Fear. The 2018-19 Marksmen Home Opener is October 19th against Roanoke, and Season Tickets are on sale now.

If you’re interested in partnering up with the Marksmen, or hearing about our season ticket packages, group packages, and mini-plans, email Director of Media Relations Shawn Bednard, SBednard@MarksmenHockey.com.