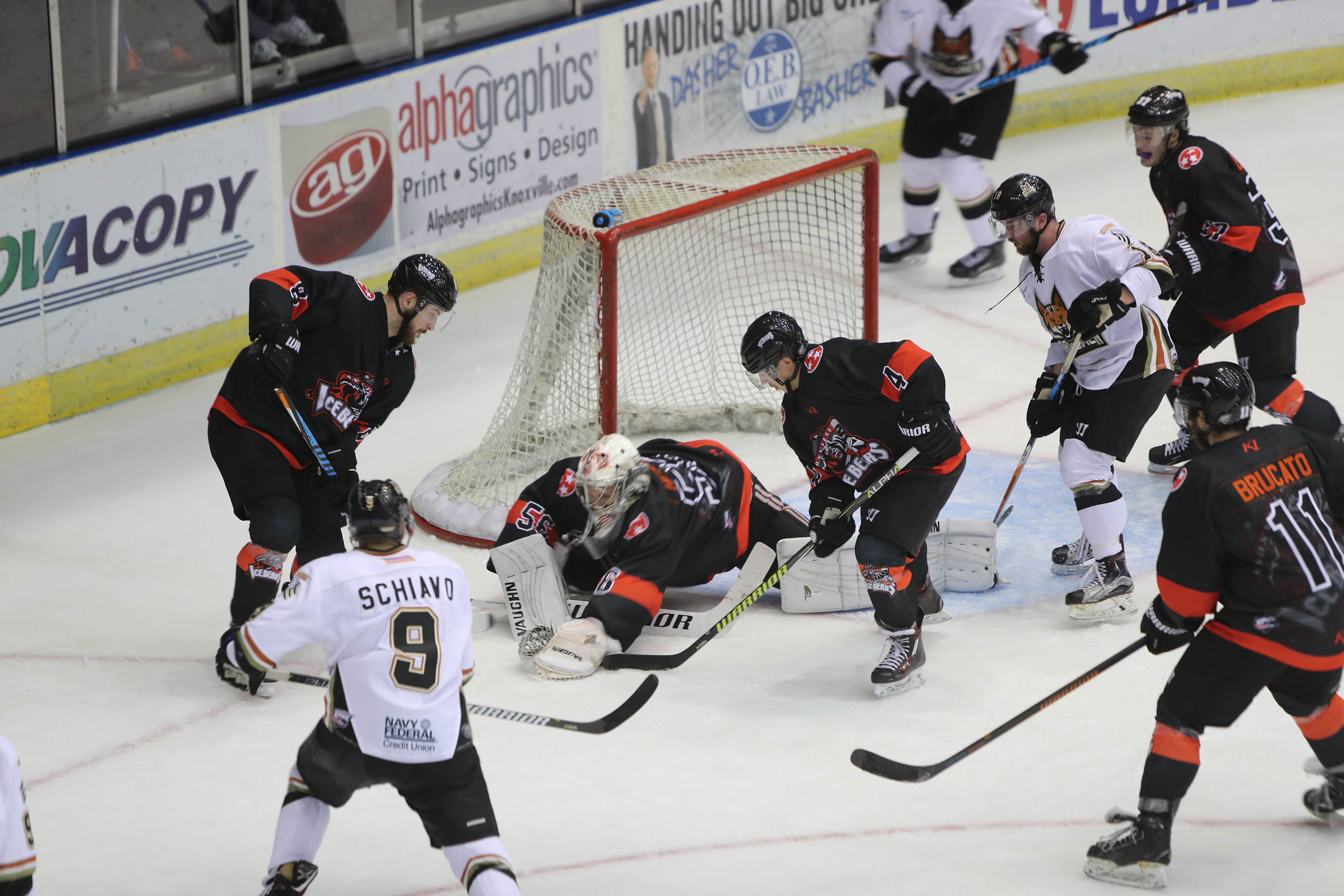 Knoxville, TN– John Schiavo’s two goal net helped the Fayetteville Marksmen battle back from a two-goal deficit, but the Knoxville Ice Bears skated away with the 4-2 victory on Tuesday night at the Knoxville Civic Center.

In a familiar refrain, the Marksmen found themselves looking at a 1-0 deficit, early in the opening frame. Berkley Scott broke free and past the Marksmen defense, lifting a soft wrister on Patrick Spano, who got part of the blocker on the puck, but couldn’t get enough, as it trickled over the goal line.

The Ice Bears carried the play throughout the first frame and extended their lead to 2-0. A battle for the puck ensued in the corner to the left of Spano, with the Marksmen winning the initial fight. In an attempt to clear the puck out of the zone the Marksmen skater lost his stick, giving Eliot Grauer a free shot from the slot that whistled to the back of the net.

Finding their footing late in the period, the Marksmen’s zone pressure led to a power play goal, courtesy of Schiavo. Finding open space in the slot, Schiavo rocketed home his 12th of the season to make it a 2-1 game.

The Ice Bears put Spano to work during the second frame, turning 17 shots his way, but the rookie netminder answered the challenge and the period ended the same as it began.

Schiavo’s second strike of the night at the 3:47 mark of the third, knotted the game up at 2-2. Justin Blaszak, from behind the net, pushed the puck back to the left point where Schiavo came streaking in and rifled the puck past a screened Zoltan Hentenyi.

While the Marksmen had taken the momentum, an interference penalty gave the Ice Bears a power play chance near the midway point of the third period. While on the man-advantage, Lawrence Cornellier came in the zone, and slid an innocent looking wrister towards the net that deflected off a defender’s stick and found its way through the pads of Spano.

The Marksmen pulled Spano late in the third in favor of the extra skater. The move generated a plethora of chances, but Cornellier’s empty net tally sealed the game, giving the Ice Bears the 4-2 victory.

Game Notes: The Marksmen are 0-4-1 against the Ice Bears this season. The Ice Bears outshot the Marksmen, 39-30. Blaszak’s assist on Schiavo’s second goal was his first career SPHL point. Knoxville was 1/4 on the power play, while the Marksmen went 1/3.