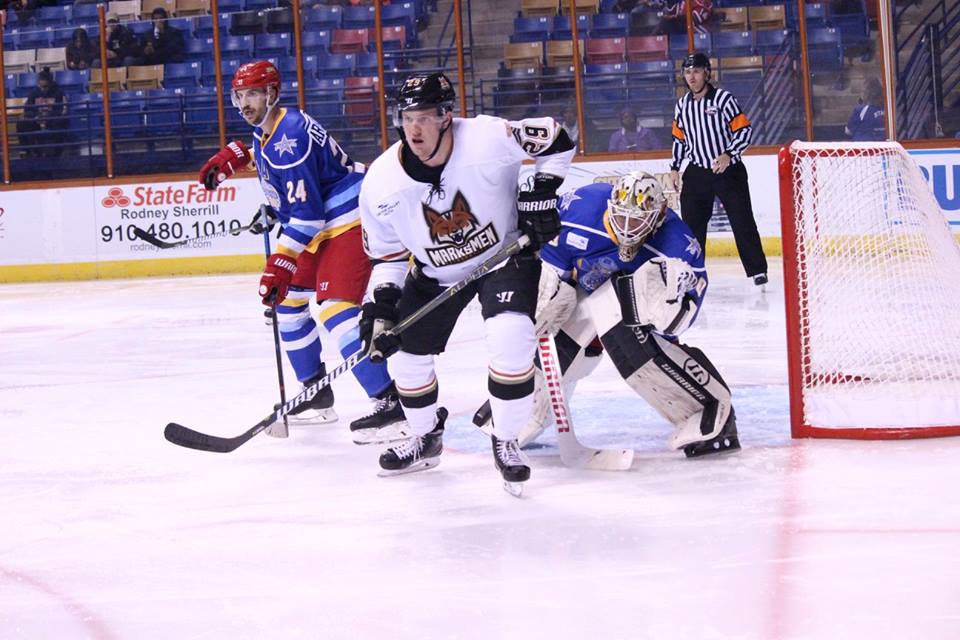 Fayetteville, NC– The Roanoke Rail Yard Dawgs scored three times in 1:54 during the middle frame, and carried the momentum until the final buzzer, downing the Fayetteville Marksmen, 7-3, on Friday night at the Crown Coliseum.

During moments throughout the first frame, each team took control of play. The Marksmen jumped out early, peppering former netminder Matt Zenzola with five quick shots. After three consecutive penalties, including an extended 5-on-3, the Rail Yard Dawgs began their onslaught on Patrick Spano, but neither team could find the back of the net.

Early in the second stanza, the game finally broke open, with the Marksmen taking advantage of their first power play of the night. John Schiavo carried in from the left side, into the slot, pushing a shot on net. Zenzola made the initial save, but the rebound caromed to the tape of Jamie Hill on the weakside, where he popped home the open-net chance.

Just over three minutes later, the Rail Yard Dawgs opened the offensive floodgates and took control of the game.

Like the Marksmen tally, an initial shot attempt was stopped by Spano, but the rebound opportunity fell to the tape of Steve Mele for the easy goal. Their second of the night came from a point shot from Ben Bauer, past Spano, who was screened on the play. Chris Kravtchouk added his first professional goal from a backdoor feed, to extend the lead to 3-1.

The Marksmen couldn’t regroup after the quick strikes, allowing the Rail Yard Dawgs to take advantage. Riley Spraggs took the puck deep into the Marksmen zone, walked in on Spano, hammering a tight shot off the pads. The rebound came out to the slot, where Spraggs finished a spinning wrister past Spano, making it a 4-1 game.

With just six seconds remaining in the middle frame, Hill found the back of the net for the second time, cutting the Marksmen deficit to two. Streaking into the zone on a two-on-one, Hill called his own number, beating Zenzola to the far post.

Dampening any hopes of a comeback, the Rail Yard Dawgs notched their second power play tally of the evening. Working the puck at the point, Joe Sova tipped a pass just to John Gustafsson at the top of the right circle for a one-timer that was drilled past Spano.

At the 7:23 mark of the final frame, Spraggs earned his second of the night to extend the Rail Yard Dawgs lead. Off a faceoff to the right of Spano, the puck trickled out of the battle and laid still for Spraggs to rocket a shot to the back of the net.

For the fourth time this season, the Marksmen grabbed a shorthanded tally to make it a 6-3 game. Junior Harris, on a breakaway, came in tight on Zenzola who made the initial save. The puck, and Harris, scooted to the corner where Harris lifted a sharp-angled shot over Zenzola, who was tied up in the crease.

With just about four minutes left to play and down by three, the Marksmen pulled the netminder in an attempt to spark the offense, but it was the Rail Yard Dawgs taking full advantage, with Mele finding his second of the night and sealing the 7-3 victory.

Game Notes: This is the first time the Marksmen have failed to register a point against the Dawgs. Schiavo is on a three-game point streak. Jake Hauswirth is two points away from 300 in his professional career. The Dawgs went 2/8 on the power play, while the Marksmen went 1/2. Brad Drobot and Zenzola dropped the gloves late in the third frame, ending Zenzola’s night early for the Dawgs.