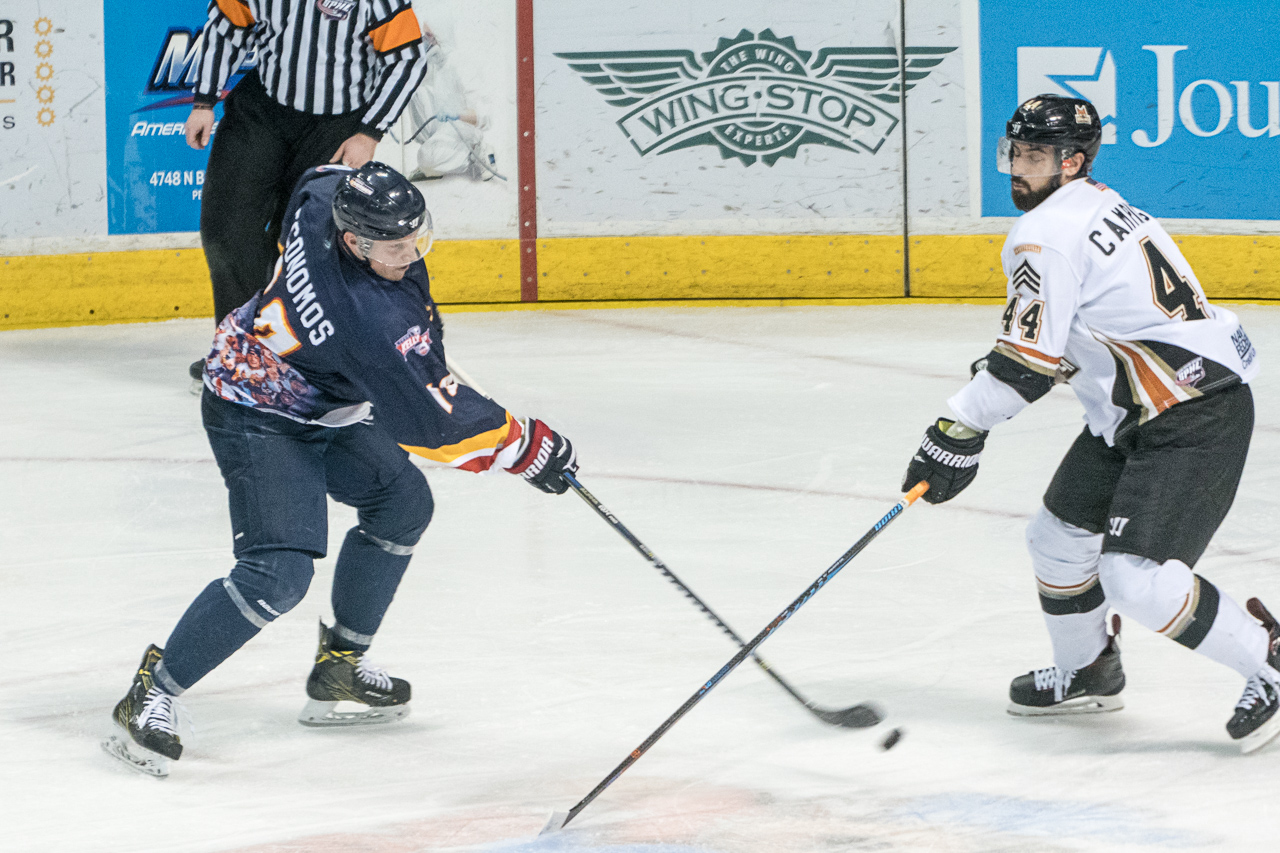 Peoria, IL– The Peoria Rivermen continued their weekend dominance over the Fayetteville Marksmen, skating away with an 8-1 victory on Sunday evening at Carver Arena.

For the third straight contest, the Rivermen jumped out to the early 1-0 lead. Brandon Rumble threw a shot on net that couldn’t be caroled by Patrick Spano, with the rebound hitting the slot where Joe Kalisz backhanded the rebound.

Adding to their lead in quick order, the Rivermen took advantage of their first power play of the afternoon, making it a 2-0 game just 41-seconds later. Michael Economos took a pass down low, outwaited Spano and tucked the puck between the post and the netminder’s glove.

With time winding down in the first period, the power play paid dividends for the Rivermen once again, this time with Mike Gurtler. Gurtler snuck down the backside, undetected, and opened himself up for a perfect feed from Will Smith, burying the open net opportunity.

Picking up where they left off, the Rivermen continued their onslaught to start the middle frame. On a delayed penalty, Economos took the puck low, fired a pass across the slot to Ben Oskroba, who tapped the puck into the open net.

Not content with their lead, the Rivermen pushed the game to 5-0, in the closing moments of the second period. Justin Greenberg drove the offensive zone, pushing the defense back, giving Economos room for a quick wrister from the slot.

That goal spelled the end of the night for Spano, who made 11 saves on 16 shots.

With the goalie change, seemingly giving the Marksmen life, Dakota Klecha made it a 5-1 contest moments later. Ludlow Harris rifled a shot from the blueline that was stopped by Peter DiSalvo, but the rebound caromed to the left circle, where Klecha was able to hit the back of the net easily.

The momentum shift stopped there, as the Rivermen seemed unfazed by the Marksmen’s tally, regaining a five-goal lead. Similar to their earlier goals, Gurtler fed a centering pass to the front of the crease, this time with Smith there for the deflection.

With three seconds remaining in the second period, Economos completed the hat trick, giving his team a 7-1 lead at the end of the middle frame. Stephen Gallo pushed a shot on net that was stopped by Denys Tsaruk, but the rebound kicked out to Economos for another open-net tap in.

While on a five-minute power play, the Rivermen continued to pour in the goals, early in the third. Cycling the puck around the zone, the puck found Joseph Widmar at the right point for a blistering one-timer.