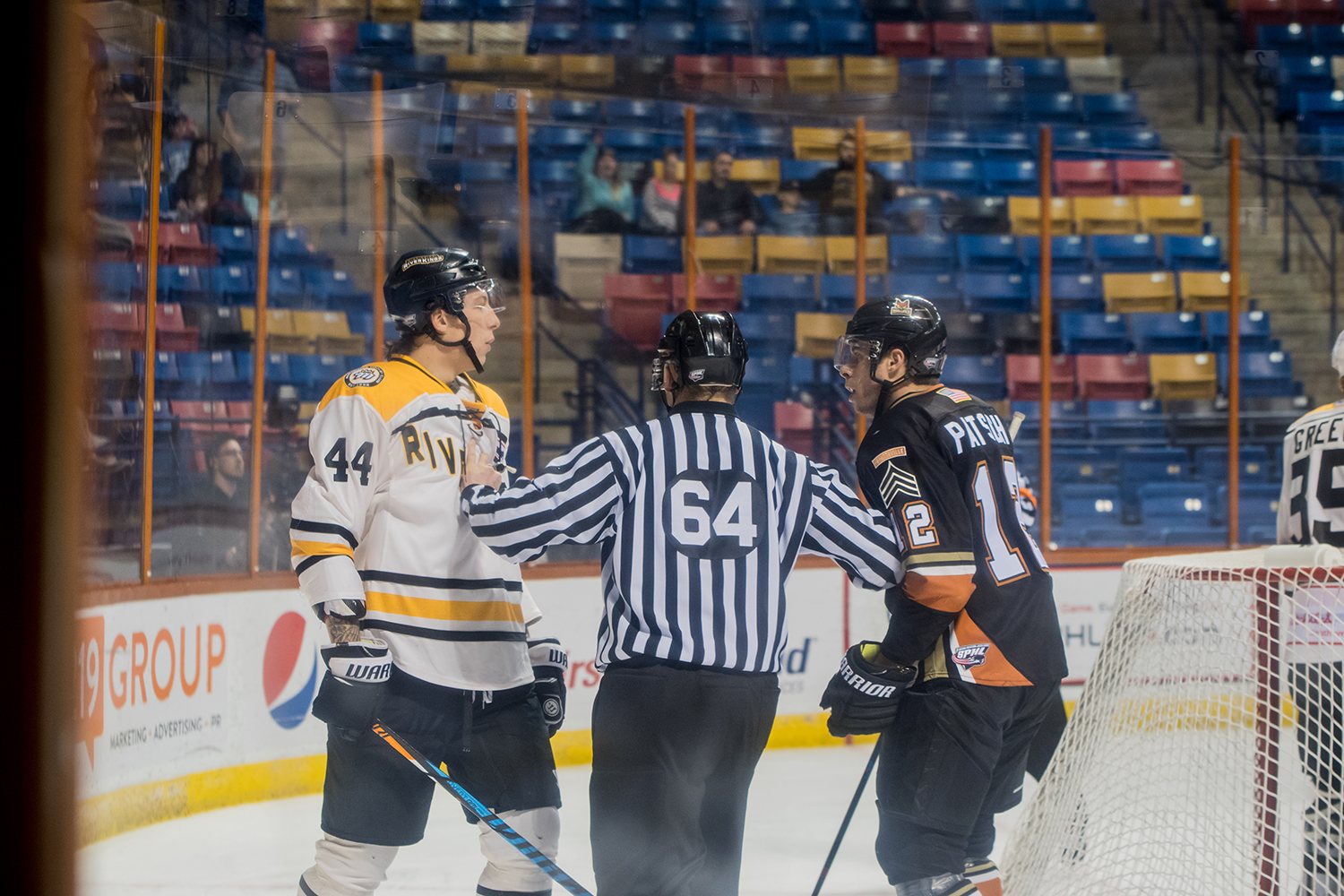 Peoria, IL– The Fayetteville Marksmen and Peoria Rivermen combined for 113 penalty minutes, including four game misconduct penalties, in a physical affair that favored the Rivermen, 7-3, on Saturday night at Carver Arena.

Riding the emotion of last night’s close victory, the Rivermen wasted no time getting on the board in the second of three-straight games. Keegan Bruce carried the puck across the front of the crease, faking a shot and dishing a pass to Michael Economos, who knocked home the backdoor feed.

The Marksmen battled back after giving up the early tally, but we’re stonewalled by Peter DiSalvo on several in-tight chances. Those saves seemed to reenergize the Rivermen, who extended their lead to 2-0, late in the first period. Will Smith drove the puck below the goal line, to the left of Spano, tucked a backhanded pass to the slot where Joseph Widmar found the puck and roofed a one-timer just under the crossbar.

Seemingly unfazed by the early deficit, the Marksmen took advantage of their second power play opportunity of the evening, making it a 2-1 game. Jake Hauswirth carried the puck down the left side, through the circle and threw a saucer pass to Dakota Klecha, who was camped out front and tapped home the one-timer.

Just 20-seconds later, Klecha knotted the game at 2-2. Off the ensuing faceoff, Klecha took the puck around the Rivermen defense, froze DiSalvo and roofed the opportunity.

The back-and-forth contest continued just 34-seconds later when Alec Hagaman gave his team the 3-2 lead, late in the first frame. From just below the right circle, Hagaman tucked the puck just under the crossbar, between the blocker of Spano and the post.

The middle frame began with the Marksmen throwing everything at DiSalvo and generating high-quality scoring chances, unfortunately, DiSalvo came up with several huge saves, and his team eventually returned the favor. Off an offensive zone faceoff, the puck slid to the corner, where Economos picked it up, walked up to the slot and wristed an attempt past a screened Spano.

While it looked like the Rivermen were poised to take control, Spano held his team in the game and was rewarded for his efforts. Ludlow Harris picked up a loose puck in his own zone, found Jesse Facchini behind the Rivermen defense, where Facchini roofed a backhanded, breakaway attempt to make it a 4-3 game.

For the third time on the night, the Rivermen pushed their lead to two goals. On a four-on-three chance, a shot from the left circle caromed off the pad of Spano and to the slot where Hagaman was waiting for the easy tap in to the open net.

Starting the third period on a five-minute power play, the Rivermen held continuous pressure in the Marksmen zone and extended their lead, making it 6-3. Cycling the puck around the zone, Cody Smith rifled a clapper from the left point past Spano.

Completing the hat trick, Hagaman gave his team the 7-3 lead, midway through the third period. Circling near the point, Hagaman waited for a screen to set up in front of Spano and marked his spot, whizzing the puck to the back of the net.

Marksmen Come up Short Against Rivermen