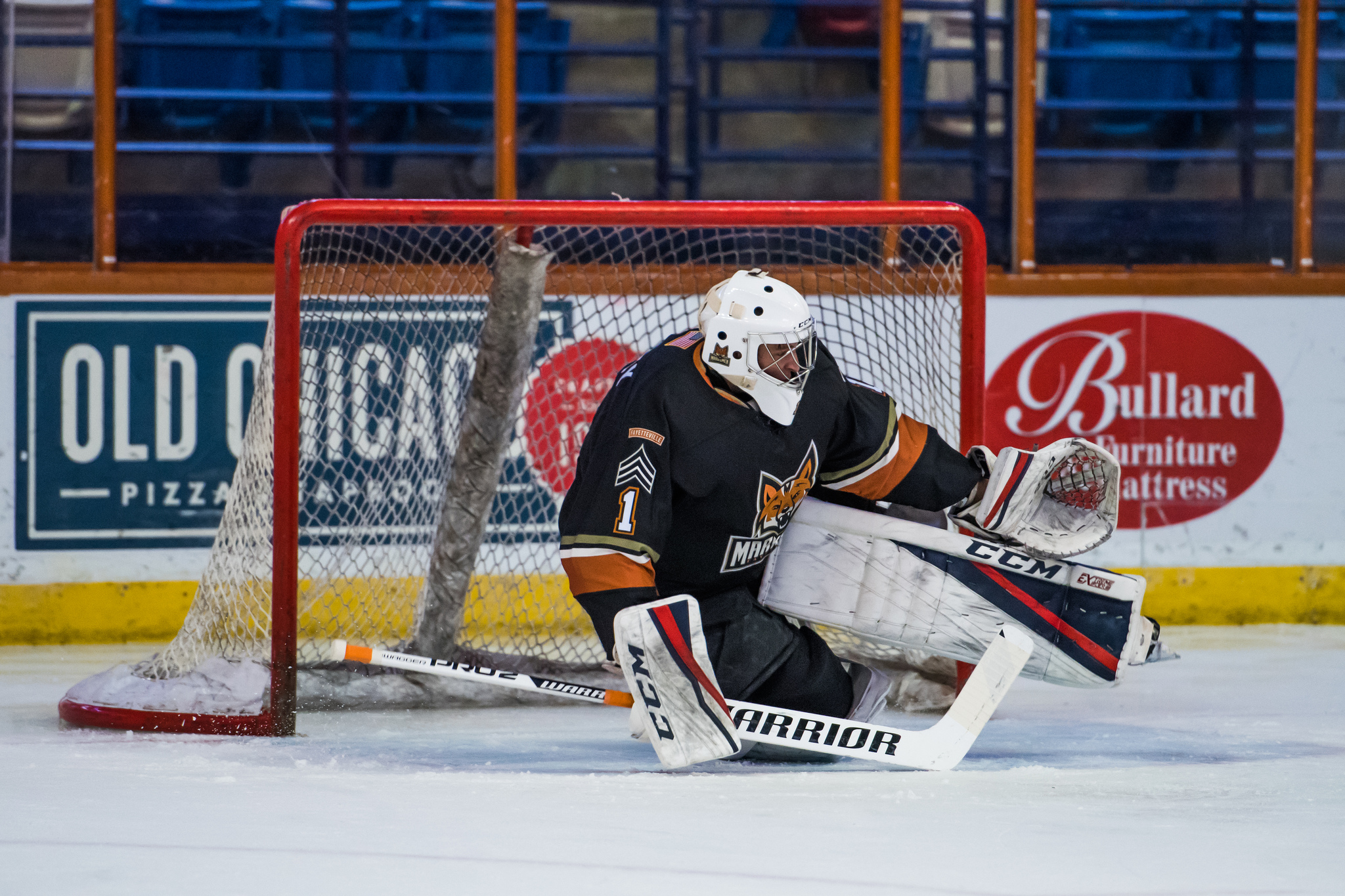 FAYETTEVILLE, N.C. – Coming off a disappointing weekend sweep against the #1 Birmingham Bulls, the Marksmen hit the road for redemption, packing their bags for a two game road stint against the #2 Macon Mayhem and rival Roanoke Rail Yard Dawgs.

Friday’s game against the Mayhem is at 7:30 P.M, as the Marksmen look to beat the Mayhem for the first time this season. The last time these two teams met, the Marksmen were handed a 4-1 loss on home ice. Travis Jeke collected an assist that game, and now he enters this weekend’s game as the leading scorer for the Marksmen. Tim Kielich has been making a noticeable impact of late, hitting twine in four straight weekends. With four goals – half as game winners – Kielich was named the Marksmen First Command Proven Performance Player this week. Brian Bowen has made himself a dynamic two-way player since coming from Pensacola, having no problems finding the back of the net. In just four games with the Marksmen, Bowen has two goals and three assists.

Macon comes in off a disappointing 4-2 loss to the Rail Yard Dawgs. Mayhem Goaltender Jordan Ruby was recently called up the ECHL’s Wheeling Nailers, leaving a void in the Goaltending core the Mayhem. With the vacancy, the Mayhem brought in Ian Sylves to be the netminder. With Sylves in the crease, the Mayhem have yet to drop a game. Jake Trask has had a high-scoring season thus far, racking up an impressive nine goals and eleven assists. With Dakota Klecha out on the IR, someone had to step up and help put points up for the Mayhem. John Siemer was the one to do it, putting up fourteen points this season. Siemer has four goals and ten assists, making him a real threat for the Marksmen defense.

Saturday night the Marksmen prepare for a rivalry tilt against the Rail Yard Dawgs at 7:05 P.M. With another chapter in this storied rivalry ready to be written, this weekend promises to be a physical one. The last time these two teams faced off was Thanksgiving Evening in a 4-2 come-from-behind victory by the Marksmen. However, the Dawgs are coming off a big win against the Mayhem, and they look to carry that momentum over to Saturday’s game. Dillan Fox and Colin Murray are tied for the Dawgs leading scorers with thirteen points each. Jordan Carvalho has a solid nine assists in sixteen games played, making him one to watch during the contest. The Marksmen are 3-1 against Roanoke in their meetings thus far.

Playing two geographic rivals, this promises to be a true test for the Marksmen, especially with their next three after the weekend being against Roanoke (two at home, once on the road).

For our fans in Fayetteville, make your way to On-After Sports Bar & Grub to watch the game with Marksmen fans and staff, in what promises to be an exciting atmosphere. The Marksmen following at On-After has grown every week, and is truly bringing a hometown feel to our road games.

If you can’t make it out to On After for either game, fret not. The games are available to watch live on SPHL Live ($), or listened to live on the Marksmen Radio Network for free as the “Voice of the Marksmen” Shawn Bednard calls ALL the action.
–