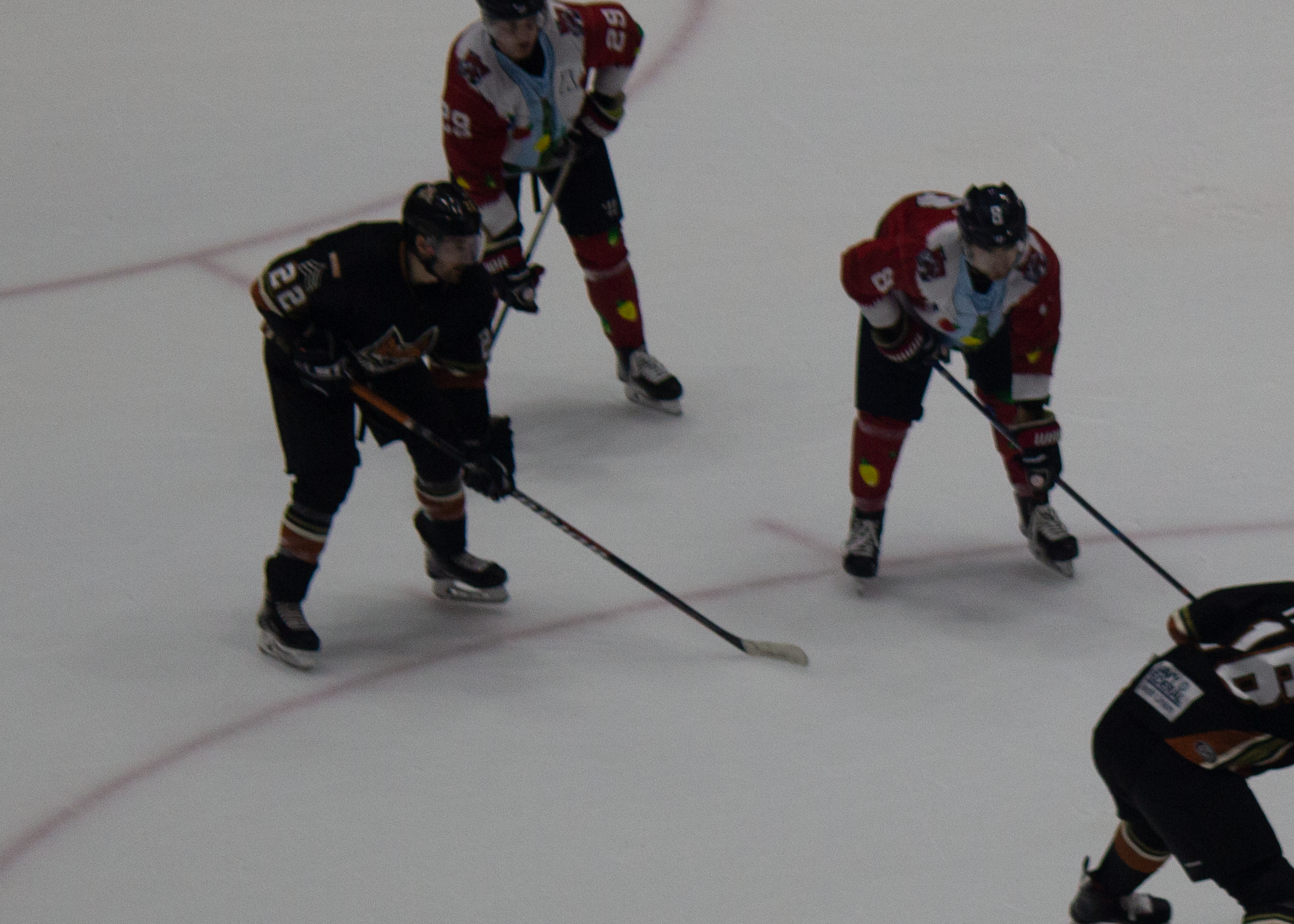 MACON, GA – After falling to the Bulls back-to-back last weekend, the Marksmen entered the Macon Centreplex looking for a chance to rebound from last weekend.

The Marksmen got off the bus and unloaded their gear, knowing they are going into battle against a tough Macon team. The “Voice of the Marksmen” Shawn Bednard said in his pregame show that the Marksmen have grown a ton since their first game of the season against Roanoke. That growth has proved to be beneficial for the Marksmen, catching a lot teams off guard. The Marksmen entered tonight’s game looking to catch Macon off guard and come away with a win.

As the first period began, Macon won an early faceoff and shot it. As John Siemer released the shot, Alex Murray misplaced the puck on a routine save giving Siemer his fifth goal of the season. Despite the early deficit, the Marksmen rebounded nicely, not letting the early mistake ruin their night. Just when things were starting the come together for the Marksmen, Justin Levac had a weird shot bouncing over Alex Murray into the net. Levac’s goal was his fourth of the season, digging the hole deeper for the Marksmen to get out of.

Before Levac’s goal, the Mayhem had seven of eight shots-on-goal. During a TV timeout, Alex Murray was called to the bench and Dillon Kelley found himself in the net. Macon’s Mike Chemello was handed an interference penalty putting the Marksmen on the power play. With the Marksmen on the power play, Brian Bowen did was he does best, found the back of the net for the fifth time this season.

Bowen’s power play goal put the Marksmen within one, giving the Marksmen life. Shortly after Bowen’s goal, Joe Osaka was sent to the box on a slashing call. The Marksmen found themselves on a penalty kill for almost the remainder of the period.

The Marksmen found themselves in a better spot following a rough start. They entered the second period looking to finish the comeback that was started at the conclusion of the first. Kristaps Bazevics was called on a tripping penalty, putting the Marksmen on the power play once again. Unfortunately, the Marksmen couldn’t capitalize on the man advantage. Jake Trask once again proved to be a huge threat, finding the back of the net on a breakaway to make it 3-1.

Taylor Pryce was called on a cross checking penalty and before he could skate to the box, Pryce and Bazevics dropped the gloves and the bell rang. Pryce and Bazevics threw heavy punches and exchanged blows in a fight that saw Pryce prevail. Cody Brown and Joe Osaka had a two-on-one breakaway that was robbed by Macon netminder Ian Sylves. Macon’s Jimmy Soper was called on a tripping penalty on that two-on-one breakaway, putting the Marksmen on the power play.

Shortly after the Mayhem killed off the penalty, the Marksmen continued to attack the net. Cody Brown tried to put the puck in the net, however Darren McCormick pushed it through. McCormick’s tenth goal of the season brought the Marksmen within one. Nearing the conclusion of the third period, the Marksmen were called on a tripping penalty, putting them on the penalty kill.

With under two minutes left, the Marksmen needed a miracle. Dillon Kelley was sent to the bench in favor of the extra attacker. Stathis Soumelidis found himself with the puck for Macon and he shot it right into the empty net. Dillon Kelley had an outstanding night in relief, with 23 saves trying to help the Marksmen recover from a rough start.

Fayetteville will have to keep a short memory, as they head to Roanoke tonight to face off in a rivalry battle on Saturday night at 7:05 P.M.

If you can’t make it out to On After Sports Bar & Grub for tomorrow’s game, fret not. The games are available to watch live on SPHL Live ($), or listened to live on the Marksmen Radio Network for free as the “Voice of the Marksmen” Shawn Bednard calls ALL the action.