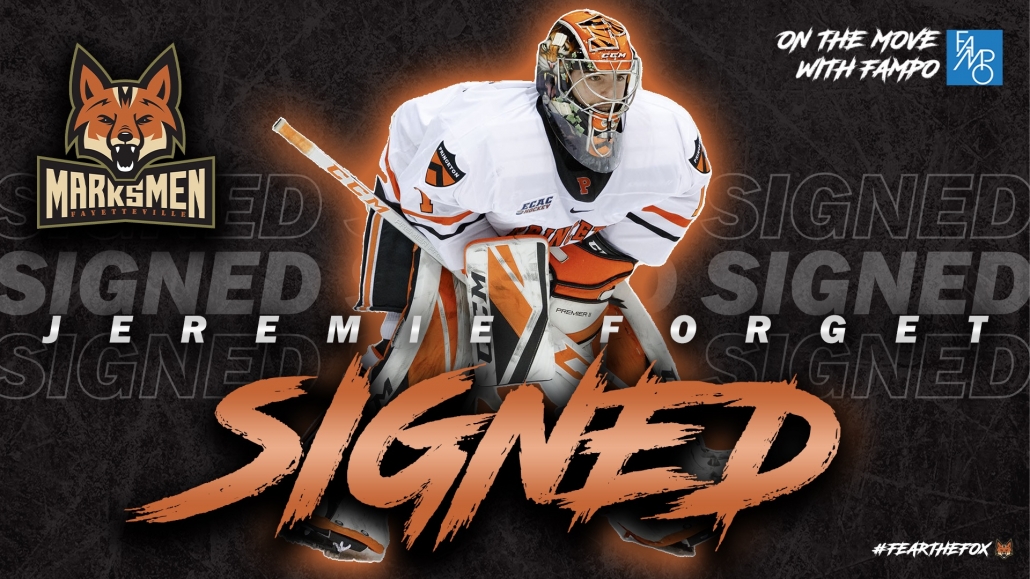 FAYETTEVILLE, N.C.-The Fayetteville Marksmen, proud members of the Southern Professional Hockey League, have announced the signing of goaltender Jeremie Forget for the 2022-23 season.

“Jeremie has a resume that it’s hard to overlook with four years in the NCAA and one of the best junior programs in Canada,” said head coach Cory Melkert.

Hailing from Mascouche, Que., Forget began his career in juniors with the Carleton Place Canadians where he notched a .936 save percentage and 35 wins in 41 games.

Recruited after his juniors performance, Forget was a four-year letter-winner at Princeton University.

During his freshman season, Forget was 2-1-1 in six game appearances with a .941 save percentage and would lead the Tigers to an ECAC playoff berth.

Named the number-one goalie before his sophomore season, Forget logged his lone collegiate shutout during his second year, a 22-save performance at St. Lawrence.

After losing his junior season to the COVID-19 pandemic, Forget did not receive much scoring support during his senior year. He and the Tigers upset 8) Cornell on the road 5-4 as the highlight of the season.

Forget wrapped up his college career season, amassing a 13-19-5 record with a .905 save percentage in 42 game appearances.

Notably, Forget is the first signing the Marksmen have announced who has not played any professional hockey games in his career.

The Marksmen take the ice for the first time this season at home on Saturday, October 22 at 6:00 p.m. against the Roanoke Rail Yard Dawgs. Single-game tickets are on sale now and you can get yours by clicking the tickets tab on marksmenhockey.com

Marksmen add Fornaris ahead of Knoxville tilt Scroll to top