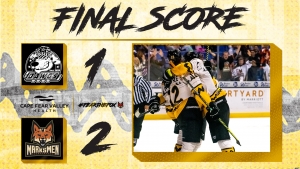 Bryan Moore would spearhead the effort in his first game back since being suspended on November 20. Moore would complete a “Gordie Howe hat trick” in the game (a goal, an assist, and a fight).

Just five minutes into the game, Moore dropped the gloves with Chris Vella in a puncher’s shootout. Both players had to be cleaned up after the showdown with Vella requiring more repairs than Moore.

After a scoreless first period though, it was Vella who opened the scoring on a breakaway.

Just three minutes later, Jon Buttitta would pool-cue a pass to Moore to add his goal and tie the game.

Moore’s goal triggered fans to litter the ice with socks and underwear during the Marksmen Sock and Undie Toss. The items will be donated to homeless veterans and other deserving organizations this holiday season.

Despite Taylor McCloy hitting the post in the third period and both teams trading chances, the game went to overtime.

After Jason Pawloski stonewalled a Roanoke rush, the Marksmen held possession in the final two minutes of overtime. Moore deked two of the three Rail Yard Dawgs defenders and slid a pass to McCloy who scored the game winner.

The Marksmen will finish the weekend tomorrow afternoon against the Knoxville Ice Bears at 3:00 p.m. Limited seats still remain for the second Marksmen Salute to Service game of the season.

Roanoke’s offense too much for Marksmen