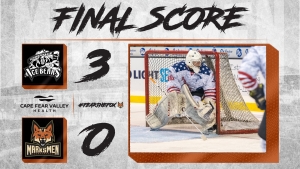 FAYETTEVILLE, N.C.- The Fayetteville Marksmen, proud members of the Southern Professional Hockey League, lost to the Knoxville Ice Bears 3-0 on Sunday afternoon at the Crown Coliseum.

Fayetteville outshot Knoxville through the first 20 minutes of the game, but was unable to sustain the offensive pressure.

After a disallowed goal in the opening period (high-stick), the Ice Bears found a way to strike first with Anthony McVeigh scoring his 8th goal of the season.

Don Olivieri elbowed Knoxville captain Stefan Brucato in the middle frame and was assessed a major penalty. Olivieri was subsequently tossed from the game, leaving Fayetteville to defend a major penalty without one of their best defensemen.

Stepan Timofeyev scored on the man advantage adding his fourth goal of the season.

At 12:50 into the second period, J.B. Baker cut free and scored to extend the Knoxville lead to three.

Fayetteville starter Jason Pawloski dueled all afternoon with Kristian Stead who was in net for the Ice Bears. Pawloski ended with 28 saves on 31 shots while stead completed a shutout of 29 saves.

The Marksmen are off next weekend and will not play again before kicking off a four-game road trip in the middle of the month. On Friday, December 31, the Marksmen return home to face Macon for Operation Sellout!

All tickets to the Dec. 31 game are $10 and tickets still remain for one of the most fun atmosphere’s of the year. Skate to marksmenhockey.com and click the tickets page to get yours.