Roanoke offense too much for Marksmen 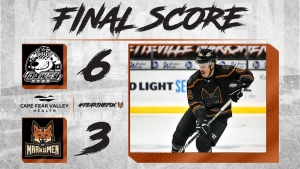 Already working with a depleted roster, the Marksmen fought Roanoke to a 1-1 deadlock through most of the first period with Tom Pokorney (RNK) and Alex Renaud (FAY). Matt O’Dea buried a feed from Mac Jansen (10,11) to break the tie and give Roanoke a lead they wouldn’t give up.

Roanoke has now scored 11 goals in two games in Fayetteville. In the season series, the home team has yet to win a game.

In the third period, the Marksmen tried to mount a comeback with goals from F.X. Girard (3) and Matt McNair (7) but Roanoke answered with a goal from Jansen and Nick Ford.

Austyn Roudebush stopped 20 of 23 shots en route to his fourth win of the season. Jason Pawloski suffers just his third loss of the season.