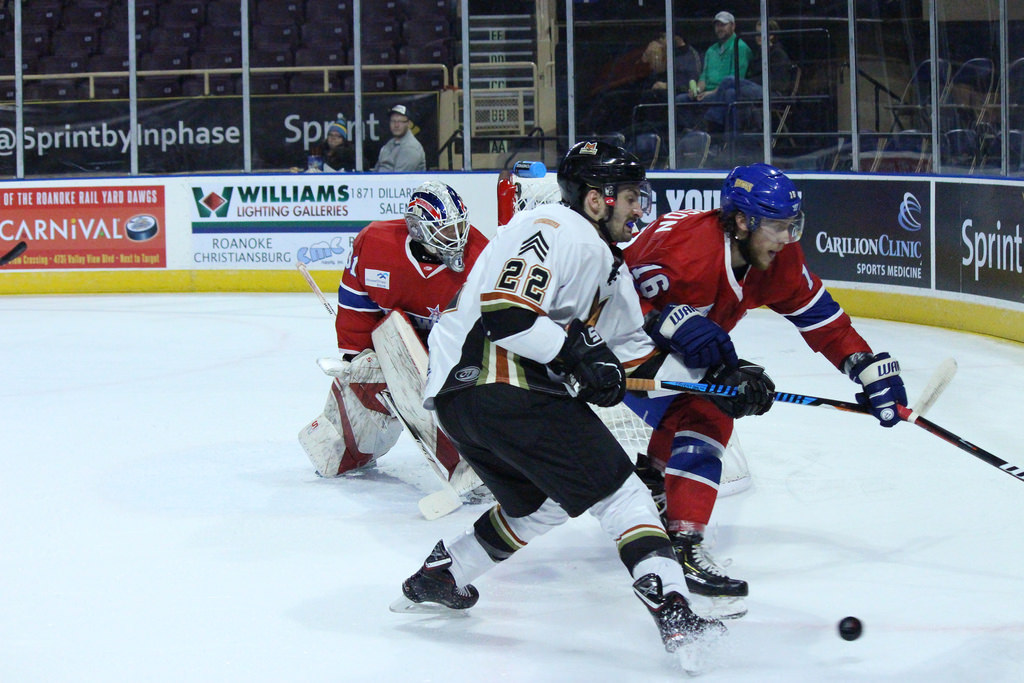 FAYETTEVILLE, N.C. – After sweeping last weekend, the Marksmen look to mirror that result again this weekend starting in Roanoke. The low scores from last weekend were not to be mirrored, as the scoring started off early.

Roanoke sent the 5500+ crowd into a frenzy, as Jeff Jones scored a controversial-goal only three and a half minutes into the contest. Following a weekend of only a single point without scoring a goal, Jake Hauswirth was out for revenge. The captain scored Fayetteville’s first goal only 57 seconds after Roanoke put one through, and he let the road crowd know it.

Penalties were the story of the first period as the Rail Yard Dawgs accumulated 23 penalty minutes, including a game misconduct against Roanoke’s Travis Armstrong for a boarding against Joe Osaka. Fayetteville served only two minutes on a Jake Hauswirth unsportsmanlike following his goal.

The second period started off quickly, as a fight broke out within the first minute, sending Joe Osaka and Roanoke’s Eric Witzel to the bench for five minutes. Fayetteville killed off an early slashing penalty, keeping the game tied at one with 15 minutes remaining. Jake Hauswirth once again was at the center of the action, as he scored the second goal of the game for Fayetteville. The puck came off the stick of Max Cook, his eleventh assist of the season. That goal was Jake’s second of the game and 12th of the season.

Looking to knock their rivals off their pedestal, Roanoke wasn’t done yet. With 6:34 remaining in the period, Roanoke tied it up, off the stick of Jordan Carvalho. The game turned into a one period showdown between bitter rivals, looking to unseat one another.

The third period started out slowly, as the only action in the first ten minutes was another Hauswirth penalty. The Marksmen successfully killed it, as they did with every penalty tonight. Other than Hauswirth, no Marksmen really made their presence felt until the third period and Darren McCormick. Goaltender-play was at a high in this contest, as both teams goalies had some highlight-reel saves. Nobody could get a puck into the net once the clock turned to the final period of the game, enter Darren McCormick. Only 2:11 left on the clock; game still tied, and a score to keep alive a streak. McCormick scored off a perfect pass from Taylor McCloy – for the second-straight weekend – giving the Marksmen a late lead and a shot at their eighth-straight.

The win improves Fayetteville to 15-11-3, only one point behind Knoxville for fifth place in the SPHL standings. Roanoke falls to 14-15-0, five points behind the Marksmen. The Marksmen return to the Crown TONIGHT to face off against these same Rail Yard Dawgs, looking for back-to-back sweeps against the Dawgs.

The Marksmen are back home Saturday, January 19 for our Hometown Heroes/First Responders Night. Tickets are available now by calling the Marksmen office at (910) 321-0123 or clicking on the date above!

Tickets for First Responder’s are just $10 HERE and at the Crown Box Office (with ID).