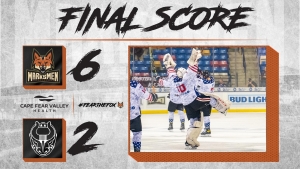 BIRMINGHAM, Ala.- The Fayetteville Marksmen, proud members of the Southern Professional Hockey League, defeated the Birmingham Bulls 6-2 at the Pelham Civic Center on Friday night.

Taylor McCloy opened up the scoring 10:44 into the first period, deflecting a pass from one of the team’s leading scorers Taylor Best. McCloy would add two more in the game for the first Marksmen hat trick of the season.

The opening frame saw Harrison Harper one-punch the league-leader in penalty minutes, David Nippard. Mike Davis would also be assessed a major penalty for head contact, giving the Marksmen a powerplay they would score twice on.

Marly Quince had a monster first period, scoring on the major powerplay and adding an assist on McCloy’s second goal. After the first period, the Marksmen led 3-0.

Yianni Liarakos would score for Birmingham just 2:33 into the middle period, but McCloy’s third goal would make it 4-1 and then Matt McNair potted a breakaway with just eight seconds to go in the period to make it 5-1.

Bulls starter Austin Lotz was pulled for Hayden Stewart after the second period.

The third period was one of control for the Marksmen, with Carlos Fornaris scoring for Fayetteville and Russell Jordan adding his team-leading sixth goal for the Bulls.

Jason Pawloski earned his fifth win of the season, stopping 21 of 23 shots faced.

The Marksmen will look for their seventh win of the season tomorrow evening at 8:30 p.m., facing the Bulls in Birmingham for the second of seven meetings this season.