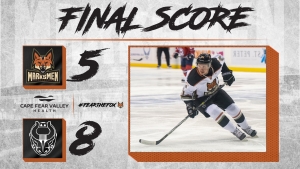 BIRMINGHAM, Ala.- The Fayetteville Marksmen, proud members of the Southern Professional Hockey League, fell 8-5 to the Birmingham Bulls at the Pelham Civic Center on Saturday night.

The game started quickly with Stephen Alvo scoring just 1:14 into the game.

Coming into the game, Fayetteville had the eighth-ranked powerplay in the SPHL, but finished the night converting on three of four powerplay attempts.

Taylor McCloy would score his fourth and fifth goals of the weekend in the game and Jarret Kup extended the first period lead to 4-1. The Marksmen set a single-period record for shots on goal in a period this season with 22 in the first.

After the intermission, Mike Davis crashed the netfront to score on the powerplay just 21 seconds in the second period.

Davis would score again on a partial breakaway from the left wing less than two minutes later to make it 4-3.

Midway through the second period, Davis drove the net on another breakaway and while Stefano Durante made the save on the first shot, Danny Liscio scored to tie the game.

Less than 30 seconds later, Kyle Gonzalez scored his first of the season to put Birmingham ahead 5-4.

The third period saw Carlos Fornaris beat Hayden Stewart through the legs, but the goal was waved-off because of a referee’s whistle. Undeterred, McCloy scored his second goal of the evening to tie the game on the same powerplay.

The Bulls would then explode as the game dwindled down. Kasey Kulczycki beat Durante on a short-side wrist shot to put Birmingham up for good. Davis completed the hat trick three minutes later on a feed from Russell Jordan.

With under 10 minutes to play, C.J. Hayes beat Durante between the legs to make it 8-5.

After the Marksmen scored four unanswered goals in the first period, they finished the game by allowing seven of the next eight goals scored. The Marksmen outshot the Bulls 52-31.

Both teams will have speedy turnarounds tomorrow. The Marksmen will head back east to faceoff with the Mayhem in Macon, kicking off a stretch of three-straight vs. their southern rivals.

Birmingham will load their bus to face Evansville at the Ford Center tomorrow afternoon.

Fayetteville returns home on Friday, November 19 for the first of two games on Hockey Fights Cancer Weekend. Limited tickets are still available, and you can get yours at marksmenhockey.com.