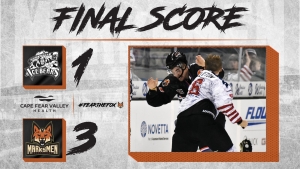 The Marksmen used a strong start in the first period to seal their first win of the weekend, scoring three times in the first 14 minutes and never looking back.

Sam Stormoen opened the scoring, driving the net on a Taylor McCloy shot and watching the rebound bound off of his shinpad and into the net.

Less than 10 minutes later, newcomer Carlos Fornaris scored after a powerplay expired to send the Marksmen ahead 2-0. His goal came on the back of a full-minute-and-thirty-second stretch of the Marksmen keeping the puck in the offensive zone.

Then at 13:58 into the first period, Matt McNair ripped a wrist shot off the far post and in, beating Knoxville starter Jimmy Poreda.

Jason Pawloski was a stalwart in net again for the Marksmen. Pawloski has allowed two or fewer goals in every start this year except for Friday night in Knoxville. He remains the SPHL leader in GAA (1.20).

The lone goal for the Ice Bears came just 12 seconds into the third period when Stepan Timofeyev scored his second goal of the season.

The Marksmen will hit the road for second three-game road stretch of the year. On Friday and Saturday, Fayetteville will face Birmingham at the Pelham Civic Center and on Sunday the Marksmen will take on Macon at the Macon Coliseum.

On Friday, November 19, the Marksmen return home for Hockey Fights Cancer Weekend presented by Tiago Title. It will be the first 7:00 p.m. puckdrop of the year, and limited tickets still remain for an inspirational weekend of games.