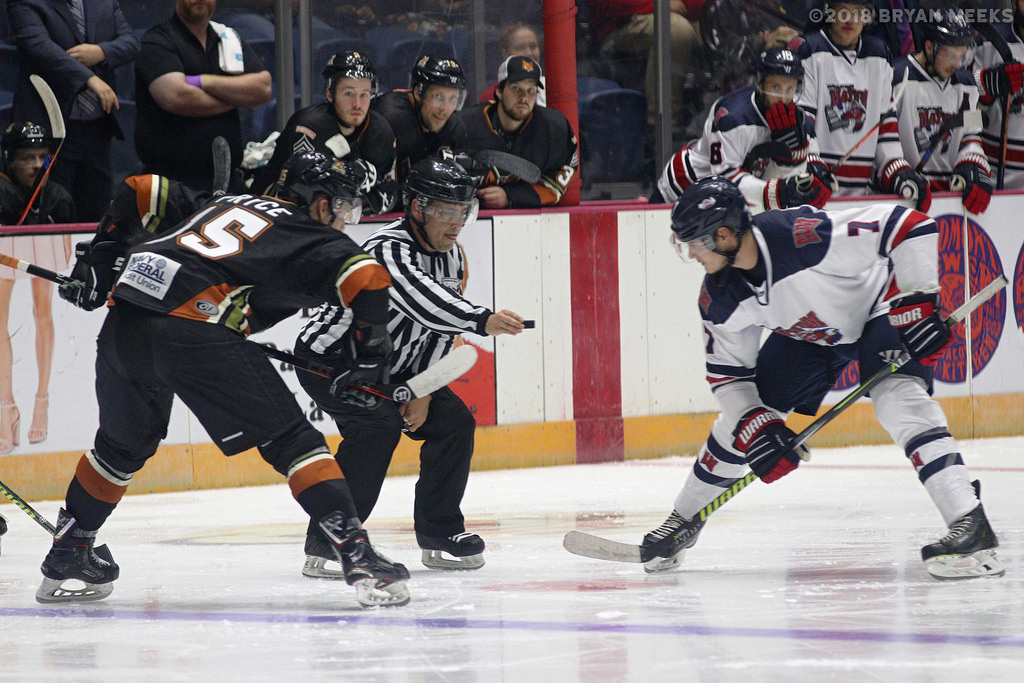 After a successful one-off weekend against the Rail Yard Dawgs, Fayetteville looks to continue their impressive performance Friday and Saturday. Making the trip from Georgia earlier today, the first-place Macon Mayhem will look to overcome a young Marksmen team that had a near-comeback two weeks ago.

The Mayhem (3-0-1) enter Fayetteville for their first road game(s) of the season, taking on a Marksmen (2-1) team that won their only home game of the season in a 2-1 thriller over Roanoke. Both teams come into the weekend off of exciting victories.

For the Marksmen, coming off an impressive 8-5 victory on the road against the Dawgs, their success came from two two-goal comebacks, and a continuation of their Pound The Rock mentality. Darren McCormick scored a hat-trick on way to being name SPHL Player of the Week. Marksmen rookies are showing off their unbelievable talents as well, Nolan Sheeran, Michael Casale and Joe Osaka all picked up their first career goals last Friday night. They say once you get your first the rest come naturally, and that was the case for the rookie Forward Joe Osaka who scored a pair of goals enroute to the first ever Gordie Howe hat-trick (goal, assist, fight) in franchise history.

Macon come into this weekend’s games leading the SPHL standings with a 3-0-1 record. Their lone loss came in a shootout, in a hard fought battle against Pensacola. In their last match-up, Brandon Fehd and Dakota Klecha both scored for the Mayhem. One of the leading scorers in the SPHL last season, Jake Trask also picked up a solo goal. The Mayhem used to their veteran knowledge to capitalize on the mistakes the Marksmen made in the early part of their last meeting. The Mayhem scored early in the first period, causing the young Marksmen team to play catch-up the remainder of the game.

Fayetteville enters this weekend’s home-stint third in goals scored and second in the league on powerplay. With a combined total of twelve goals in just three games, the young-offense has had little difficulty finding the back of the net.

Friday Night’s theme is Haunted Hockey, a night the Marksmen look to give the Mayhem the chills. The game will feature a Costume Contest during the first intermission, drink specials all night, and plenty of spooky family fun.

On Saturday is one of the biggest nights of the year, as it’s the Marksmen’s annual Military Appreciation night. For fans, the first 1000 people in the door will get a special Stars & Stripes Marksmen t-shirt. Fayetteville, honoring the local Military presence from Fort Bragg, will be wearing very special, one-night-only Stars & Stripes jerseys, which will be auctioned off after the game.

Tickets start at just $12/person, and if you can’t make it out, join the Voice of the Marksmen Shawn Bednard on SPHL Live or listen live on the Marksmen Radio Network. After Saturday’s game, we hope to see you at Bubba’s 33 in Fayetteville for our post-game party, following the live Jersey Auction.

The Marksmen are back home THIS Friday, November 2 for Haunted Hockey, and Saturday, November 3 for Military Appreciation. Tickets are available now by calling the Marksmen office at (910) 321-0123!