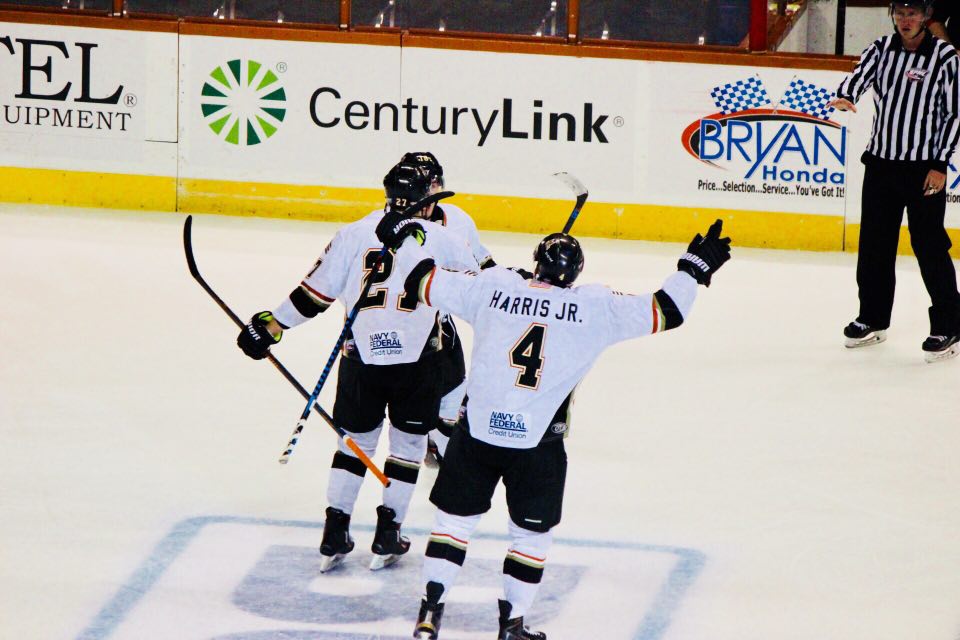 Fayetteville, N.C– Bouncing back from last weekend, the Fayetteville Marksmen showcased stringent defense, allowing one goal, as they downed the Birmingham Bulls 4-1 at the Crown Coliseum on Friday night.

For just the fifth time this season, the Marksmen found the back to open the scoring for the evening. While on an early penalty kill, Kyle McNeil stole the puck in the neutral zone, creating a two-on-one into the zone. McNeil called his own number and pushed a wrister past the glove of Mavric Parks.

Special teams continued to provide the offense early in the game. The Bulls, while on a power play, tally to make it a 1-1 contest. Cycling around the zone, Keegan Bruce found Josh Harris in the slot for a quick wrister past Peter Di Salvo.

Not content with a tie game going into the first break, Jake Hauswirth continued his torrid pace on the season, regaining his team’s one goal lead. Digging a puck out of a scrum along the far wall, Hauswirth walked into the slot and roofed a shot from the faceoff dot.

Trading chances through the second frame, neither team could find the back of the net, finishing the second with a 2-1 game, just as it began.

Through the early portion of the third frame, the Marksmen carried the play and were rewarded for their efforts. Stepping up from his blueline position, Junior Harris leaned into a heavy shot and ripped the puck to the back of the net.

From that point on the Marksmen carried the play, and tacked on an empty-netter courtesy of Hauswirth.

Game Notes: The Marksmen went 0/3 on the power play, while the Bulls went 1/2. Di Salvo stopped 27 of 28 shots turned his way. The single goal given up is the lowest goals against total the Marksmen have allowed all season.

Offense Sputters as Marksmen Fall to Mayhem Scroll to top