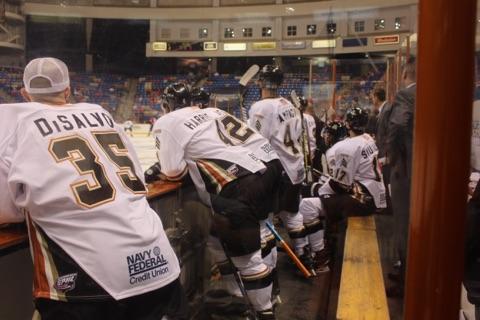 Macon, GA– The Macon Mayhem showcased their offensive prowess in both games this weekend, outscoring the Fayetteville Marksmen, 19-2, after a 9-0 victory on Saturday night at the Macon Coliseum.
For the second straight night, the Mayhem jumped out to the early 1-0 lead, just 1:41 into the contest. Stephen Pierog fired a shot from the top of the right circle and past the glove of Kent Patterson.

After the first period of play, Patterson had turned aside 19 of the 20 shots he faced, while the Marksmen could only muster six shot attempts.

The Marksmen earned carryover power play time to begin the middle frame, but did little with the opportunity, giving the Mayhem additional momentum. Just after the expiration of the penalty, Pierog tipped a pass across the slot to Ryan Salkeld, who netted the second goal of the game.

Just past the midway point of the second stanza, the Mayhem took a commanding 3-0 lead. Misplaying the puck behind his own net, Patterson tried to rim a shot around the boards, but the attempt was intercepted by Darren McCormick, who pushed the attempt on net and past Patterson.

35-seconds later, the Marksmen found themselves in a 4-0 deficit. Streaking into the zone, the Mayhem failed to connect on an attempted deflection, with the puck rolling behind the net. Numerous Marksmen skaters battled for the puck along the boards, but couldn’t find the handle as the puck squirted to the slot to Paul Russell, who was left unmarked, and rifled a one-timer home.

Utilizing a smooth transition game, the Mayhem grew their lead to 5-0. Finding space through the neutral zone, Pierog lifted a shot on Patterson, with the rebound floating through the air, Salkeld batted the puck into the net.

Following the outbreak of several fights on the ice, the Mayhem were awarded a power play chance. Cycling the puck with ease around the zone, a point-shot sailed in towards Patterson but changed direction quickly, once McCormick got the blade on the puck, making it 6-0.

The pummeling continued for the Marksmen, as it became a 7-0 game at the 1:10 mark of the third frame. While on the power play, the Mayhem moved the puck to the slot, where Dennis Sicard trickled a slow roller over the goal line.

Just seven-seconds later, the Mayhem found themselves on a two-on-one break, with McCormick deflecting the puck into the net to make it an 8-0 game.

Special teams continued to produce offense for the Mayhem, including their penalty killers. Off a faceoff in the Marksmen zone, Sicard took the puck in the slot, where he was camped out all alone, and found John Siemer on the far-side post, also unmarked, for the easy lift in to make it 9-0 at the midway point of the third.

Game Notes: The Marksmen were outscored 19-2 on the weekend, while being outshouted 94-53 in the two games. The Mayhem went 2/8 on the man-advantage, while the Marksmen went 0/8. John Schiavo had his four- game point streak snapped and earned his first career fighting major.